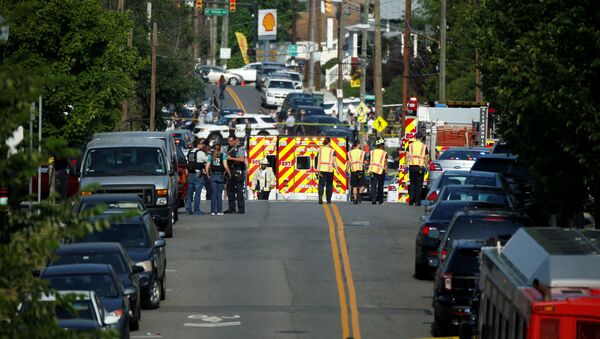 MOSCOW (Sputnik) – According to the Fox News channel, House Majority Whip Steve Scalise and his aides were shot at a baseball practice.

UPDATE: Suspect is in custody and not a threat. PIO will be onscene shortly to share updates.

SHOOTING: Congressman Steve Scalise (R-LA) and others were shot at a baseball practice in Alexandria, VA.#wednesdaywisdom pic.twitter.com/4fS96MPTMa 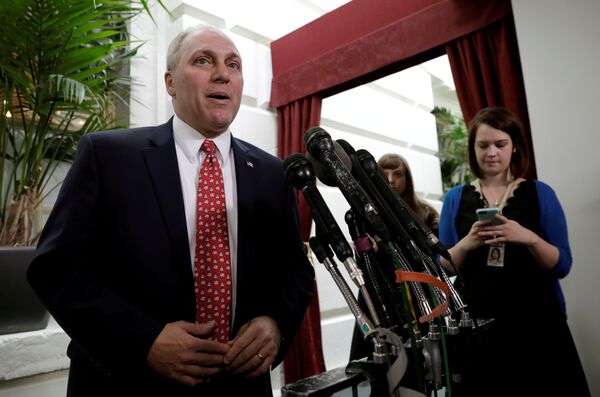 Utah Republican senator Mike Lee told Fox News Scalise had been shot in the hip and his life was not in danger. Someone applied a belt as tourniquet on the congressman. A lot of police officers have arrived at the scene. Scalise is is surgery for his hip wound.

US Park Police have arrived for medevac in #AlexandriaVA #DelRay after multiple gunshots fired near YMCA baseball field. pic.twitter.com/s9yCmg61Xl

"If we hadn't had that security detail we would have been at the mercy of the shooter and he had a lot of ammo," Congressman Mo Brooks told reporters. The lawmaker added that the gunman had a rifle and fired at least 50 times.

Congressman Brad Wenstrup said the individual fired a rifle and then a pistol before he was taken down by law enforcement. At the same time, Congressman Rand Paul said in an interview with Fox News that there was a bust of 50 to 60 shots.

"Two Capitol policemen were shot and I'm told one of them, even being shot, was protecting people to the end," Paul told ABC News in a phone interview.

Senator Jeff Flake said one of the officers was a woman named Crystal. He said the officer was airlifted to a local hospital.

Flake said the man was in "late 40s, dark hair, white, with a blue shirt on and jeans."

He added the suspect first opened fire in the middle of the field before moving behind a dugout.

Paul said the officers were part of Scalise's security detail and were only at the baseball field because he is a senior member of Congress, the House Whip.

"And these people were real heroes. Without them I think everybody would have been killed," Paul added.

4 people shot near sports field in Alexandria on Monroe Ave. At least on person airlifted to hospital. @wusa9 pic.twitter.com/HsrnbgFN78

US President Donald Trump and Vice President Mike Pence are aware of the situation developing in the state of Virginia, White House spokesman Sean Spicer said in a statement.

Both @POTUS & @VP are aware of the developing situation in Virginia. Our thoughts and prayers are with all affected.

"The Vice President and I are aware of the shooting incident in Virginia and are monitoring developments closely," Trump stated. "We are deeply saddened by this tragedy. Our thoughts and prayers are with the members of Congress, their staffs, Capitol Police, first responders, and all others affected."

Rep. Steve Scalise of Louisiana, a true friend and patriot, was badly injured but will fully recover. Our thoughts and prayers are with him.

I am monitoring the current situation in Alexandria with our Va public safety team & we are coordinating w/ local authorities.

US Federal agents from the Bureau of Alcohol, Tobacco, Firearms and Explosives (ATF) are heading to the scene of the shooting involving Congressman Steve Scalise and others during baseball practice in Alexandria, Virginia, the bureau said in a statement.

"ATF special agents from Washington Field Division are responding to the shooting in Alexandria, Va. to assist our law enforcement partners."

The US Capitol Police (USCP) said in a statement they will increase the number of officers around the Capitol building in Washington.

"Out of an abundance of caution, the USCP has deployed a robust police presence throughout the Capitol Complex," the statement said.

The USCP said all buildings in the Capitol complex remain open.

US Congressman Roger Williams was not shot but one of his staff members was and is currently receiving medical attention, Williams' office said in a press release.

"Congressman Williams was not shot, however a member of his staff was shot and is receiving medical attention," the release stated on Wednesday.

Williams has served as the coach of the Republican Congressional Baseball Team since 2013.