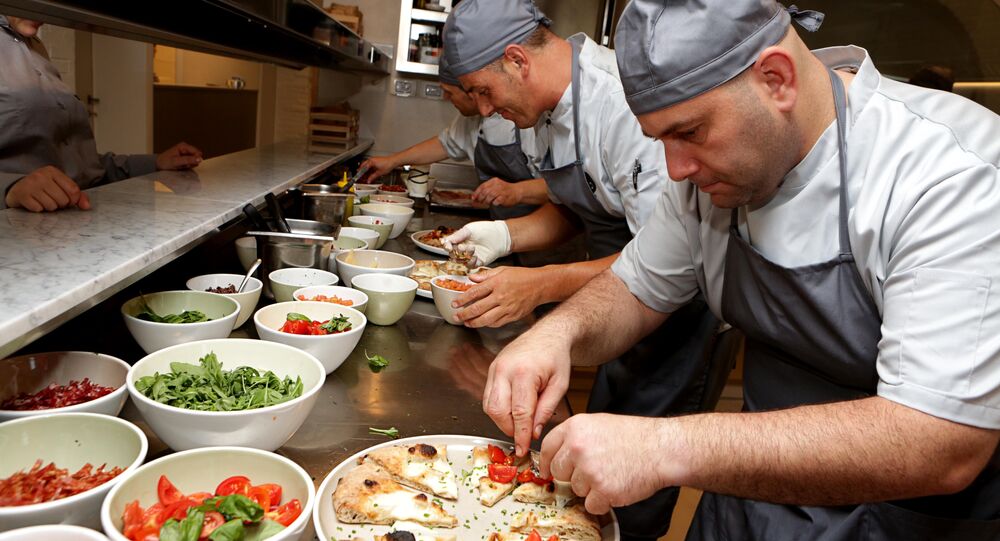 A Slice to Save a Life: Rehab Center Wins Accolade for Italy’s Best Pizza

Sp.accio is not your average pizzeria. Run by former drug addicts as part of a rehabilitation program in Italy, a nationwide poll run by food website Gastronauta has just placed it as Italy's finest pizzeria. Sputnik goes behind the scenes to trace the origins of its success.

The pizzeria is owned by the Comunita di San Patrignano, a major Italian rehabilitation center located in Coriano, near Rimini.

"200 people have so far been able to return to society thanks to the professional training received in our pizzeria," restaurant manager Giuseppe Morgese, 33, told Sputnik.

Since its inception in 1978, San Patrignano has specialized in treating people with drug addictions, including society reintroduction via training schemes.

The pizzeria and community shop Sp.accio is the latest in such schemes. Launched in 2008, it has recently made headlines by winning the Best Italian Pizza accolade.

"Sp.accio was born to give residents of our rehab center concrete training opportunities in the catering sector," Morgese explained.

"Society reintroduction is indeed one of the most delicate passages once the drug addiction recovery program has been completed."

"The idea first came to Vicenzo, a pizza-loving guy from Naples, recovering at San Patrignano… the first experiments, initially involving only a restricted few, begun 11 years ago. We tested dough, leavening, toppings, searching for produce that delivered the best results."

"Our idea was to give back authenticity and taste to Italy's most famous food," Morgese added.

The experiments with taste buds lasted for three years until, in 2008, the San Patrignano rehab center opened its Sp.accio pizzeria in Rimini, Italy's most famous seaside resort.

"Our intuition was to understand what the Italian job market offered and still offers — good opportunities in the food sector," Morgese added.

And the response from the public, according to Morgese, has been very warm from the beginning:

"The mix of gourmet pizza, a social project, well designed premises and a store where to buy San Patrignano products, as well as a selection of Italy's best artisanal products, turned out to be a winning one."

Stefano Folco, 29, one of the residents at San Patrignano is part of the Sp.accio pizzeria project.

"I asked to conclude my recovery path with the Sp.accio team because the world of catering attracts me," Folco told Sputnik, "I enjoy working in a team and in contact with the public. I was ready to test myself."

To him, pizzeria work was a revelation.

"I would have never imagined I'd be a pizzaiolo [man who makes pizza] one day. The world of leavening is a continuous and fascinating discovery," Folco told Sputnik.

The human aspect is just as key.

"The satisfaction of receiving compliments for my pizzas, seeing guests tucking on them with gusto, is enormous!

"Pizza is a universal food, it brings people of different cultures together. It's an expression of Italianness… being able to contribute to that is a massive honor," Folco said.

In Italian spaccio means "store" which is usually found within a community, however it also means "trafficking" — the kind of "trafficking" that people who join San Patrignano rehabilitation center have suffered from.

The dot between the first two letters of the word and the remaining ones are wordplay. The "Sp" stands for San Patrignano.

It sounds like, "this is a sp.accio, a community shop, San Patrignano's community shop." But it's not the spaccio that they have left behind by baking Italy's best pizzas.

Fresh off the Boat: Now, Pizza Can Be Delivered by Canoe