The Chandra and XMM-Newton telescopes have helped astronomers to find the first potential “wandering” black hole in the distant galaxy of Boötes Constellation, an article published in Astrophysical Journal reports. 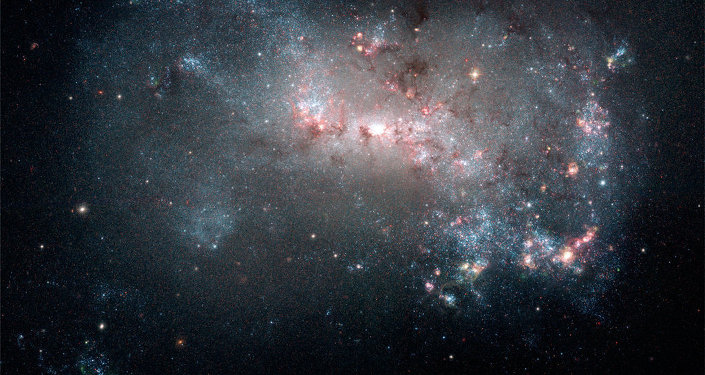 © Flickr / Hubble Heritage
NASA Discovers Furthest Galaxy Cluster, Many Questions Unanswered
A black hole is a region in space-time, where gravitational effects are so strong no object can escape from inside of it, even those moving at the speed of light, including light itself.

According to the scientists, the “wandering” black hole has “escaped” from a smaller neighbor of this stellar metropolis.

Boötes constellation lies in the northern hemisphere. It is one of the largest constellations in the sky. The “usual” black holes, unlike their supermassive counterparts in distant centers of galaxies are extremely difficult to find and analyze because of their calm disposition.

Their presence can only be understood from the way they bend light of other stars, as well as by the flashes of radio emission that are generated during the absorption of matter clumps, Astrophysical Journal reported.

The discovery of the “wandering” black hole was made by Olivier Godet from the University of Toulouse [France] and his colleagues. They found an extremely unusual example of a black hole, which occupies an intermediate position between the “normal” black holes and its supermassive “big sisters.”

The scientists made the discovery using the Chandra and XMM-Newton telescopes.

In one such galaxies, GJ1417 + 52 in the Bootes constellation, which is 4.5 billion light-years away from Earth, Godet’s team found two highly-bright X-ray objects.

One of them is a supermassive black hole weighing a few million suns and the second is XJ1417 + 52 which is a compact object.

The French astronomer called this discovery a very lucky find. However, how this black hole could just start “wandering” through the galaxy, moving at a speed which is different from all the other objects around it, still remains a mystery.

The images from the Hubble telescope show that GJ1417 + 52 recently came across and absorbed the remains of a small dwarf galaxy.

The scientists believe that the black hole XJ1417 + 52 could actually have formed inside of it, where it came in contact with a larger GJ1417 + 52, after the collision scattering almost all the stars in the galaxy.