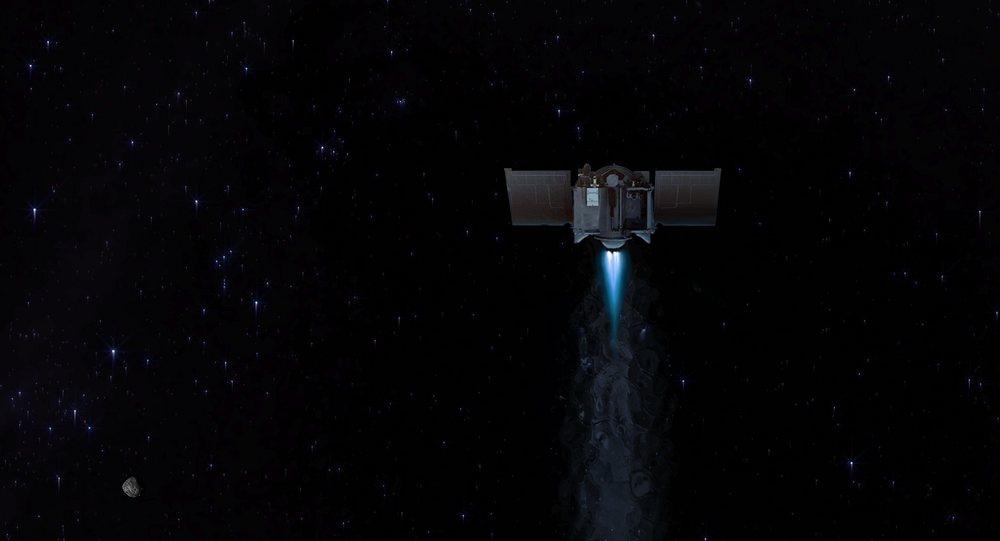 The OSIRIS-REx spacecraft on Monday began its two-and-a-half-year trek back to Earth, NASA revealed in a same-day announcement.

According to the news release, the spacecraft fired its main engines for some seven minutes, thrusting it away from asteroid Bennu at approximately 600 miles per hour (965 kilometers per hour).

The May 10 event was broadcast via Sputnik livestream.

"OSIRIS-REx’s many accomplishments demonstrated the daring and [innovative] way in which exploration unfolds in real time," Thomas Zurbuchen, associate administrator for science at NASA Headquarters, said in a quoted statement.

"The team rose to the challenge, and now we have a primordial piece of our solar system headed back to Earth where many generations of researchers can unlock its secrets," he added, speaking of the Bennu sample retrieved from asteroid Bennu during a 'Touch-And-Go' mission back in October 2020.

The OSIRIS-REx spacecraft is slated to return to Earth around September 24, 2023.

Once the spacecraft reaches Earth, the capsule containing the sample of Bennu will separate from the spacecraft's main body and parachute to the Utah Test and Training Range. Scientists will be awaiting to retrieve the capsule.

NASA/Goddard/University of Arizona/Lockheed Martin
The left image shows the OSIRIS-REx collector head hovering over the Sample Return Capsule (SRC) after the Touch-And-Go Sample Acquisition Mechanism arm moved it into the proper position for capture. The right image shows the collector head secured onto the capture ring in the SRC. Both images were captured by the StowCam camera.

In order to ensure the spacecraft's 2.5-year trip back to Earth is a success, the mission's team will now have to track and plan out its future maneuvers.

"Our whole mindset has been, 'Where are we in space relative to Bennu?'" said Mike Moreau, OSIRIS-REx deputy project manager at NASA’s Goddard Space Flight Center. "Now our mindset has shifted to 'Where is the spacecraft in relation to Earth?'"

According to experts at NASA, the sun's gravity will have the most influence on the OSIRIS-REx spacecraft's course.