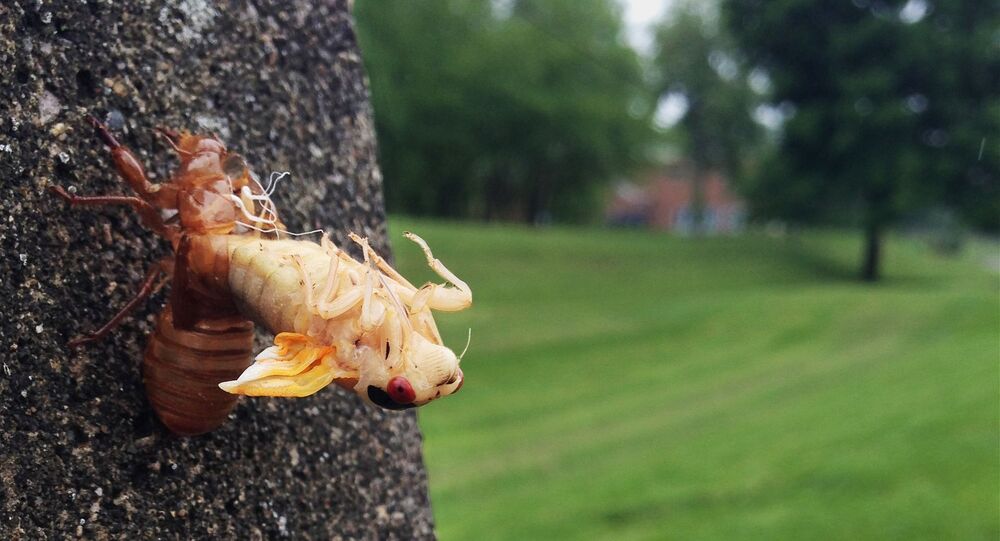 Generation X: Rare Periodical Cicada Nymphs Are Ready to Scramble up From Ground in US

Periodical cicadas emerge from the ground every 17 years in the US, which could face a huge cicada influx from one of the most massive clusters, the Great Eastern Brood, in a matter of days. The last one was reported in 2004.

Periodical cicadas, which resemble locusts but are related to crickets, are arriving for the first time since 2004. They fill the skies of the US every 13 or 17 years, depending on their cycle, and also differ from annual cicadas, which come out every summer. Usually they burrow underground in the form of a 'nymph', and feed at the roots of trees. They emerge once in a generation to sing and procreate.

“This is one of the craziest life cycles of any creature on the planet,” entomologist Michael Raupp noted, cited by Associated Press.

Scientists know 15 huge broods of periodical cicadas that inhabit the eastern parts of the US; they are traditionally numbered using Roman numerals. For example, Brood I lives in Virginia, Brood III in Iowa, and Brood VII in upstate New York. The Great Eastern Brood, which will creep out of the ground soon, is considered one of the largest and is denoted by the Roman numeral X (ten).

“You’ve got a creature that spends 17 years in a Covid-like existence, isolated underground sucking on plant sap, right? In the 17th year these teenagers are going to come out of the earth by the billions if not trillions. They’re going to try to best everything on the planet that wants to eat them during this critical period of the nighttime when they’re just trying to grow up, they’re just trying to be adults, shed that skin, get their wings, go up into the treetops, escape their predators,” Raupp said.

This time, the invasion of this particular brood is expected in 15 US states. Most likely, they will be the first to be seen in Georgia, after which they will fill most of the eastern US. Scientists predict that in some places the density of cicadas could reach 370 million per square kilometre.

Some people could be scared when the brood emerges; the ground starts to resemble sea waves, and sounds like a lawnmower. These insects, however, are harmless to humans and usually don’t pose a threat to vegetation; they are considered safer than mosquitoes. While young plants can suffer when the insects feed en masse and from damage caused by the females when they lay their eggs, their long-awaited appearance reflects the fact that nature continues to maintain a balance, despite the pollution, climate change and sharply declining biodiversity.

After 17-Year Absence, Billions of Cicadas Projected to Emerge This Month in Some US States