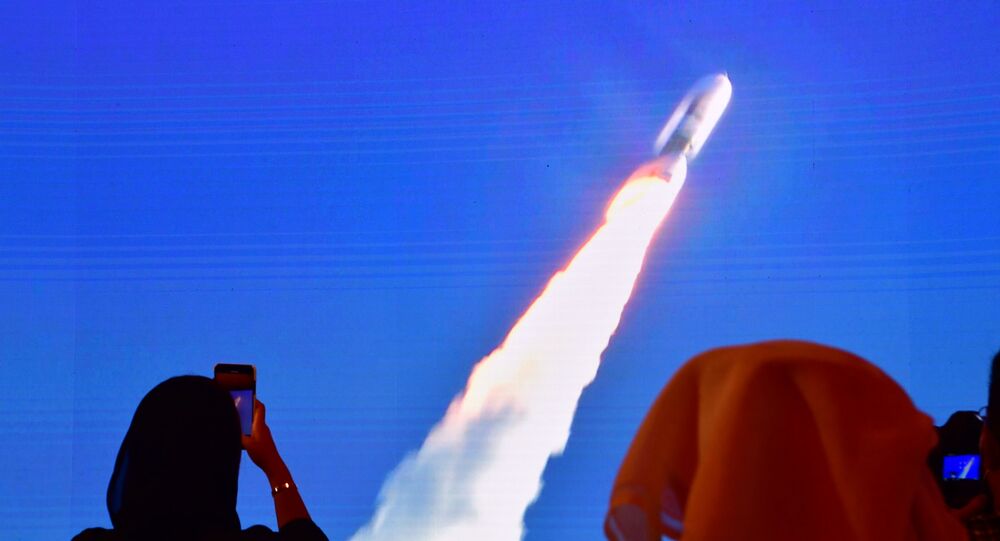 The US and China launched missions shortly after the UAE's launch in July last year, taking advantage of the time when Earth and Mars are closest. "Hope," or "Al-Amal" in Arabic, will orbit the planet for at least one Martian year, 687 days.

The UAE's "Hope" probe, the first Arab space launch in history, is scheduled to enter Mars' orbit on Tuesday, making it the first of three spacecraft to arrive this month on the Red Planet following last year's launch spree, The Times of Israel reported Sunday.

The United Arab Emirates will become the fifth nation ever to reach Mars, if successful. The venture is scheduled to mark the 50th anniversary of the UAE's unification. The China mission is due to become the sixth the next day.

Landmarks around the country have been lit up in red at night, social media pages are adorned with the hashtag #ArabstoMars, and Burj Khalifa, the tallest tower in the world, will be the focus of a celebratory display on the day of the mission launch.

Burj Khalifa lights up in red, in preparation for the arrival of the Hope Probe to the Red Planet..

As the #HopeProbe's arrival to Mars approaches, & in support of this historic Arab mission, #RTA lit the Tolerance Bridge, Dubai Water Canal waterfall, & other pedestrian bridges across #Dubai in the colours of the Red Planet. #ArabsToMars pic.twitter.com/gT743o1IQi

The UAE's probe is not a ground mission, while China's Tianwen-1 and the US Mars 2020 Perseverance rover will both land on the surface of the Red Planet. Previously, Mars has only been successfully entered by the US, India, the former Soviet Union and the European Space Agency.

According to Emirati officials, the Hope mission now faces its "most critical and complex" maneuver after launching from Japan last year, with approximately a 50-50 chance of entering the orbit of Mars successfully.

To be caught by Martian gravity, the spacecraft must slow down dramatically, spinning and firing all six of its Delta-V thrusters for about 27 minutes to reduce its cruising speed to about 18,000 kph from 121,000 kilometers (about 75,000 miles) per hour. The operation, dubbed "The Dark Half Hour", consuming half of its fuel, will start at 15:30 GMT on Tuesday, and it will take 11 minutes for the progress signal to reach ground control.

What happens in the dark half hour when the Probe is eclipsed by Mars?#ArabsToMars #HopeProbe pic.twitter.com/zWebnMyuIo

​Omran Sharaf, the project manager of the UAE mission, said it was a "huge honor" to be the first of this year's missions to reach Mars, according to the report.

“It is humbling to be in such auspicious and skilled company as we all embark on our missions,” he said. “It was never a race for us. We approach space as a collaborative and inclusive effort.”

Although the Hope probe is designed to provide a detailed picture of the weather patterns of the Earth, it is also considered a step towards the goal of establishing a human settlement on the Red Planet within 100 years.

In September 2021, Hope is expected to start transmitting data back to Earth, using three analytical methods to track the Martian atmosphere, with data available for scientific analysis around the world.

The UAE also wants the project to serve as a source of inspiration for Arab youth, while apparently cementing its role as a key player in the region.

As for other missions scheduled to follow the Arab one, the first image of Mars made during flight, a black-and-white photo showing geological features like the Schiaparelli crater and the Valles Marineris, a large stretch of canyons on the Martian floor, has already been sent back by China's Tianwen-1, or "Questions to Heaven."

China's mission, which weighs about 4.5 tonnes, contains a Mars orbiter, a lander and a solar-powered rover that will study the soil and atmosphere of the planet, take images, chart maps and search for signs of the previous existence of life for three months.

In May, China is planning to land a 240-kilogram rover in Utopia, a massive Martian impact basin. Its orbiter is designed to last a Martian year.

This is not the first time China has tried to reach Mars. The previous launch failed in a 2011 mission with Russia.

© AP Photo / NASA/JPL-Caltech/MSSS
Life on Mars Could Be Hiding Just Below Surface, Study Says
On February 18, NASA's Perseverance is scheduled to touch down on the Red Planet. It will become the fifth rover to complete the journey since 1997, with all of the missions having been American. It is on an astrobiology mission to search for evidence of ancient microbial life and, for the first time, will attempt to fly a 1.8 kilogram helicopter drone on Mars.

The rover, able to maneuver 200 meters (650 feet) per day autonomously, can gather rock samples that could provide crucial clues as to whether Mars has ever sustained life.

It weighs a tonne, has 19 cameras and two microphones, which scientists hope would be the first to capture sound on Mars. The mission is set to last for a minimum of two years.