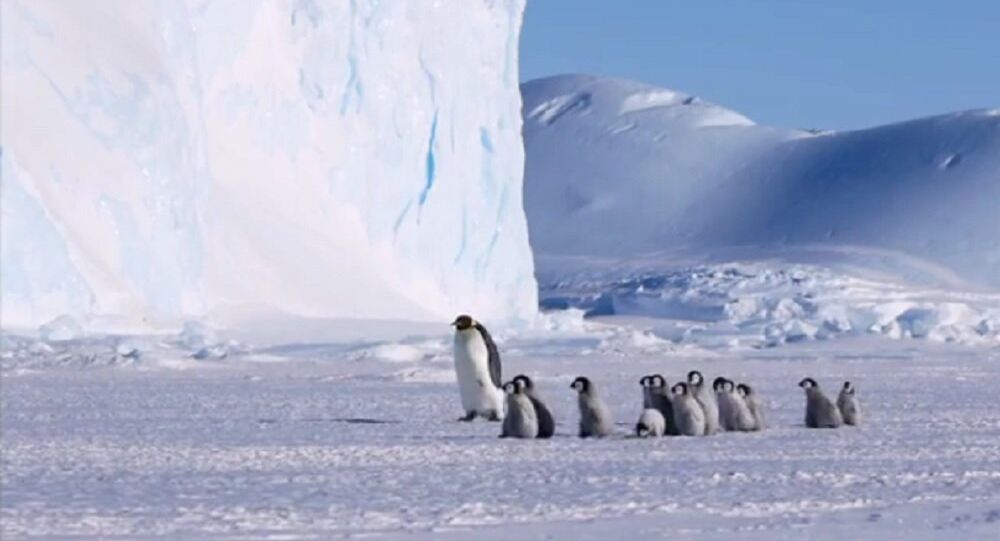 The huge iceberg that originally broke off from an Antarctic ice shelf in 2017 had been drifting towards South Georgia Island, in the south Atlantic, with scientists concerned it might destroy the rich ecosystem of the island's underwater shelf and marine life.

A mammoth iceberg that has been drifting on a dangerous collision course with the island of South Georgia in the southern Atlantic Ocean, threatening to cut off vital ocean access for the island's penguin and seal population, has split in two, according to scientists that have been tracking its progress.

​Dubbed A68a, the chunk of floating ice approached the western shelf edge of the island, which is part of the British Overseas territory of South Georgia and the South Sandwich Islands, where it was swept up by strong currents, causing it to pivot nearly 180 degrees, according to zooplankton ecologist Geraint Tarling with the British Antarctic Survey.

“You can almost imagine it as a handbrake turn for the iceberg because the currents were so strong,” said the scientist, quoted by The Guardian.

At that point the iceberg seems to have clipped the shelf edge and lost part of its icy mass on Friday, 31 miles (50 kilometres) away from the island's west coast, with the latter becoming an iceberg in its own right, named A68D.

The smaller piece is now believed to be moving further away from the original chunk, with scientists currently unable to estimate its size.

The original iceberg is heading south-east, where another current awaits it. Once it finds itself in its clutches, A68a will be potentially carried back around toward the island's east coast.

Throughout the past few weeks, the iceberg A68a had been sparking concerns among oceanographers and marine biologists as it headed closer to South Georgia Island, which is located in the middle of an alley of currents that tend to attract bigger icebergs north from Antarctica toward the Equator.

There were fears that the iceberg’s looming impact with the island would wreak havoc with the life of the inhabitants, such millions of gentoo, macaroni, king penguins and sea lions, nesting albatrosses, and petrels.

Despite the recent developments alleviating immediate concerns for the welfare of the inhabitants in the vicinity of South Georgia Island, scientists warn the separate pieces of the iceberg still present a danger to the environment.

"All of those things can still happen. Nothing has changed in that regard," the outlet quoted Tarling as saying.

A possible scenario is that the iceberg might become lodged in the island's shoreline, stuck there for 10 years, blocking access to the ocean for penguin and seal parents, who forage for fish and krill to feed their young.

Furthermore, while waters around South Georgia measure at approximately 4 C, in the vicinity of the iceberg the temperature could nosedive a couple of degrees. The accompanying release of fresh chilled meltwater into the region could also be devastating for the local biodiversity.

As it started drifting, steered by strong ocean currents, the chunk of ice’s progress was closely monitored by scientists and government officials with the help of the British Royal Air Force.

We now have VIDEO of that @RoyalAirForce reconnaissance flight over #iceberg #A68a. There are some mighty fissures, and the sea around the berg is littered with bits and bobs. Watchout South Georgia! 🦭🐧 Read more: https://t.co/0hJP5fDdJ5 pic.twitter.com/MOWUWMuwZg

​The British Royal Air Force conducted mission over it to take photos and videos. After it was determined that the iceberg was on a collision course with the island of South Georgia in the southern Atlantic Ocean, a team of scientists speedily prepared for a mission that would take them to the location onboard the research ship the RRS James Cook.

The scientists plan to collect and study animals in the water, as the expedition uses two robotic submarines to measure the temperature, salinity and levels of phytoplankton in the water around the iceberg, patrolling the area for four months and transmitting data to the ship. The plethora of studies would enable scientists to forecast the iceberg’s impact on the environment.

In a disaster encounter dating to 2004, an iceberg called A38-B ran aground in the immediate vicinity of the island. As a result, many seal pups and young penguins died.