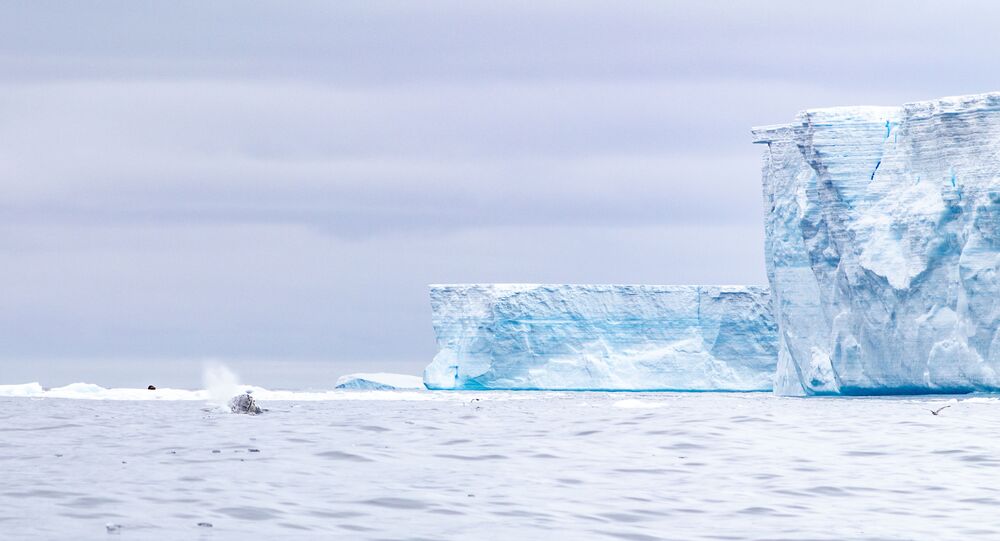 An iceberg approximately the size of Delaware broke off from the Larsen C ice shelf in the Antarctica in 2017 and has been drifting through the Southern Antarctic Front, its progress closely monitored by scientists and government officials with the help of the British Royal Air Force.

A team of scientists are urgently gearing up for a mission to the world’s biggest iceberg, which is on a collision course with the island of South Georgia in the southern Atlantic Ocean.

The A-68A iceberg, estimated to measure around 4,200-square-km (1,500 sq miles), broke off from the Larsen C ice shelf in Antarctica in 2017 and now threatens to wreak damage on a rich ecosystem upon impact, writes The Guardian.

We are keeping a close eye on the A68a iceberg as it drifts through #SouthGeorgia waters. These shots taken from a @RoyalAirForce A400M aircraft provide a unique view. It was so huge it was impossible to capture its entirety in a single shot! #SGSSIdiscover pic.twitter.com/nX8ToUfQP9

​Researchers at British Antarctic Survey (BAS) are scheduled to fly to the Falklands on 11 January. After a quarantine period necessitated by the ongoing coronavirus pandemic, the scientist will undertake a three-day voyage to the iceberg onboard the research ship the RRS James Cook.

The Royal Research Ships are operated by the NOC on behalf of @NERCscience.

RRS Discovery & RRS James Cook are available for charter by marine organisations operating both within the UK & internationally. Find out more at https://t.co/uSiWElGrFh (2/2) pic.twitter.com/LnSP7YxrgJ

Government officials have been surveiling the chunk of ice, steered by strong ocean currents, with the help of the British Royal Air Force, as it conducts mission over it to take photos and videos.

We now have VIDEO of that @RoyalAirForce reconnaissance flight over #iceberg #A68a. There are some mighty fissures, and the sea around the berg is littered with bits and bobs. Watchout South Georgia! 🦭🐧 Read more: https://t.co/0hJP5fDdJ5 pic.twitter.com/MOWUWMuwZg

“Even though icebergs are common, we’ve never had anything this size before, so it’s a first for us,” Professor Geraint Tarling, a biological oceanographer at BAS was quoted as saying.

When the research ship arrives at its destination, scientists will collect and study animals in the water. Two robotic submarines will be launched to measure the temperature, salinity and levels of phytoplankton in the water around the iceberg, patrolling the area for four months and transmitting data to the ship.
The studies will provide scientists with information enabling them to forecast a picture of the iceberg’s impact on the environment.

The destination that the huge iceberg is heading towards is an inhospitable environment with no permanent residents, save for scientific research bases.

The seabed around the island, which is part of the British Overseas territory of South Georgia and the South Sandwich Islands, is home to molluscs, crustaceans, sponges and other marine life, which will inevitably be endangered by the released chilled meltwater.

The edge of the South Georgia shelf is rich in phytoplankton, krill and other species, making it a prime feeding ground for penguins, seals and whales.

“The biodiversity of this area is as rich as you’d find in the Galapagos,” said Tarling.

While waters around South Georgia measure at about 4 C, in the vicinity of the iceberg the temperature could potentially plummet a couple of degrees. Furthermore, the release of what could potentially be billions of tonnes of fresh water into the region could be devastating for the local biodiversity.

“If the iceberg does ground, we could be looking at this being there for up to 10 years because it’s so large. It’ll be a huge problem,” said Tarling.

If the iceberg were to become lodged on the continental shelf, it would seal off a large stretch of feeding ground where penguins and seals traditionally forage for krill.

While whales might be able to seek out other feeding grounds, say scientists, the large colonies of penguins and seals could not venture far from the island as they are too “fixed to their base”.

As for how the likelihood of the monster iceberg, currently 60 miles off the coast of South Georgia, getting stuck on the shelf, Povl Abrahamsen, the chief scientist of the BAS mission, said it was very difficult to predict what might happen.

“It may be the iceberg ends up bumping and scraping along the edge of the shelf or breaks clear of the islands. But it may also get grounded and stay around for months or years. At this stage it’s very difficult to predict what will happen next,” he said.