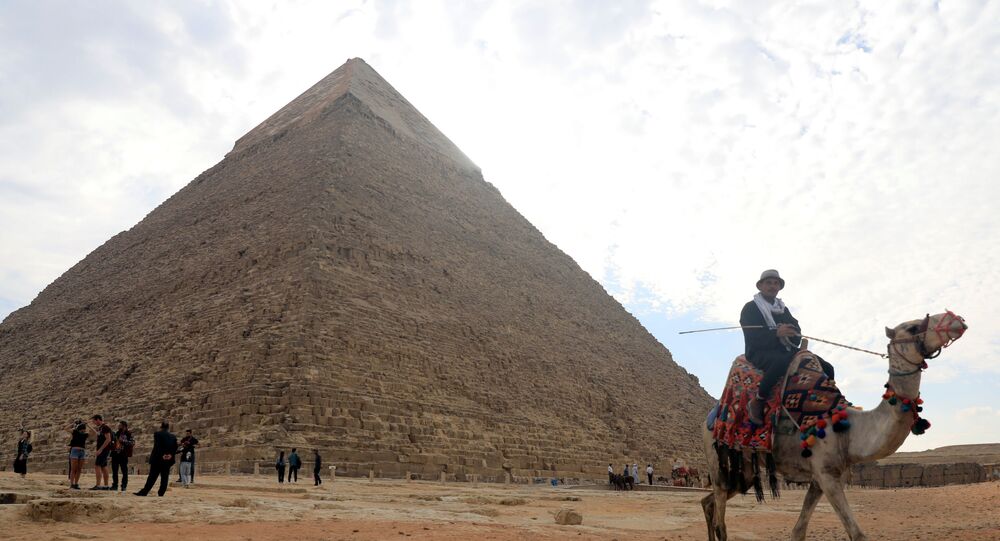 The Great Pyramid of Giza, located in Greater Cairo is home to many mysteries. Constructed nearly 4,500 years ago, it consists of over 2 million blocks, sparking questions as to how ancient people, lacking modern technology, were able to erect such an immense structure.

A commonly accepted hypothesis is that ancient builders constructed the Great Pyramid of Giza by moving  its millions of stone blocks from a nearby quarry and putting them up one by one, but according to structural engineer Peter James, this was not necessarily the case.

“The Egyptians believe there are 2.6 million blocks in the Great Pyramid”, James told to Express.co.uk.

“That means that if you took these from the quarry, one at a time, you would need one every six minutes to do it in 25 years. That’s absolute nonsense.”

In his 2018 book ‘Saving the Pyramids: Twenty First Century Engineering and Egypt's Ancient Monuments’, James detailed a different theory behind the Great Pyramid’s construction following a shocking discovery by legendary Egyptologist Flinders Petrie back in the 19th century.

“Petrie discovered stone sockets at each corner that had no apparent use and did not align with the outer casing or over-cladding,” James wrote in his work. “These sockets, I believe, were used to erect profiles made from timber.”

According to the engineer, who has spent over a decade preserving historical structures of Egypt through his company Cintec, these sockets can spotted on all building sites “when the foundations are set out and are used to project the building line to create the right angles”.

“I believe the ancient builders used visual sighting methods such as transits to mark out and measure lengths,” he wrote, explaining that these transits have been uses “to project a straight line”.

“I would have poles marked in cubits, say 15 to 20 cubits long, to measure the distances and without any rope or cordage,” the expert went on, detailing on how this would have helped to construct the pyramid’s base.

© REUTERS / AMR ABDALLAH DALSH
Tourists wearing protective face masks under restrictions imposed due to the coronavirus disease (COVID-19) pandemic, are seen in front of the pyramid of Khafre or "Chefren" in Giza, Egypt, November 9, 2020

According to the specialist, once the foundation has been set “precisely”, then “the angle of construction would be approximately 45 degrees” when measured across the diagonals and not the pyramid’s face.

James was now ready to elaborate on this thought:

“As long as a block goes in and is the same height up, you can start on all four corners and go all the way up at the same 45 degrees. It’s exactly what masons do today, they make sure it's square. As the pyramid went up, the top got smaller”.

The Great Pyramid is estimated to be 230 metres in length and nearly 150 metres in height and, according to James, “as long as a block goes in and is the same height up”, it is possible to start “on all four corners and go all the way up at the same 45 degrees”.

“It’s exactly what masons do today, they make sure it's square. As the pyramid went up the top got smaller”.

The structural engineer argues that ancient workers used external ramps to get inside the pyramid’s internal perimeter. They would then construct interior ramps to have admission to corridors and burial places.

© AP Photo / Nariman El-Mofty
Tourists ride a camel as they visit the historical site of the Giza Pyramids, in front of the Khafre pyramid, right, near Cairo, Egypt. File photo.

Thus, the pyramid’s infill “would comprise of much smaller and more easily managed stones similar to those found in the centre and above the burial chamber in the Step Pyramid”, James explained. “If you just build the outside foundation you can fill it with much smaller blocks more quickly.”

“I suspect what happened is they started on the corners, went up, had ramps put inside and got to the burial chamber about 50 metres up,” eventually leaving gaps with support beams discovered by Petrie.

The Great Pyramid of Giza is the biggest and the oldest of three pyramids located in the Greater Cairo pyramid complex. Archaeologists believe that it had been built as a tomb for pharaoh Khufu over the course of nearly two decades.