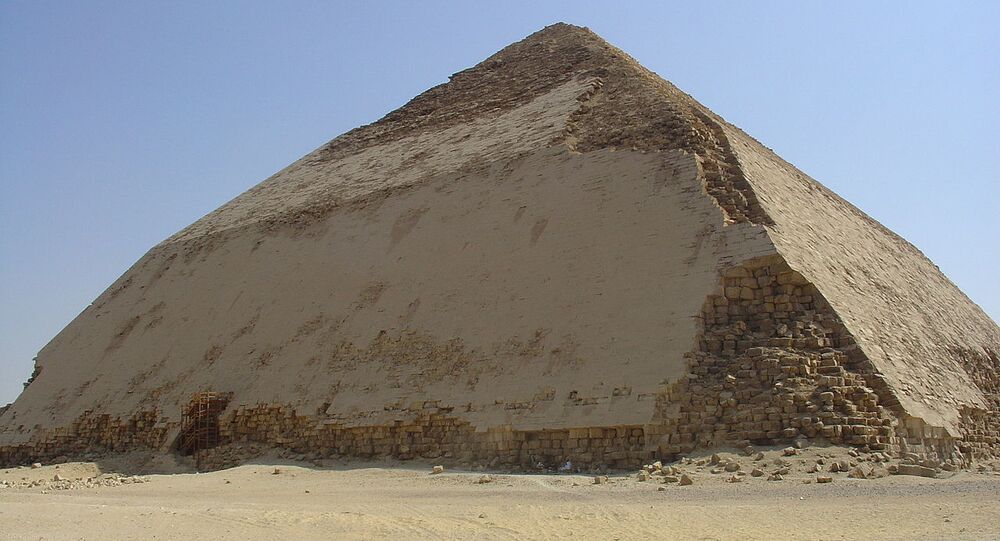 Newport-based structural engineer Peter James together with his team has been restoring the Egyptian pyramids for 18 years, working deep inside the iconic structures and questioning how exactly they were built, over 4,000 years ago.

The workers who toiled on the construction of ancient Egypt’s pyramids made an error, claims a structural engineer expert who has long been immersed in the renovation of the ancient monuments, writes the Express.

The secrets behind the construction of the iconic pyramids of Egypt, built for the country’s pharaohs, anticipated to become Gods in the afterlife, and their consorts, are some of the most enduring and intriguing. The earliest known Egyptian pyramids are found at Saqqara, northwest of Memphis.

The Pyramid of Djoser, or the Step Pyramid, is believed to date back as early as 2630 BC. However, it is the pyramids built during the Fourth Dynasty, and situated on the Giza plateau, that are, perhaps, the most famous.

🇪🇬🇪🇬 🇪🇬The Pyramid of Khafre or of Chephren is the second-tallest and second-largest of the Ancient Egyptian Pyramids of Giza and the tomb of the Fourth-Dynasty pharaoh Khafre, who ruled from c. 2558 to 2532 BC. #Egypt pic.twitter.com/L8l6nWPyDL

The pyramid of Menkaure at Giza is just 65 metres high. Still, it makes humans beside it appear as ants. #pyramids… pic.twitter.com/anHVzmDr3I

​Located approximately 25 miles south of Cairo is another landmark not quite worthy of a postcard - the Bent Pyramid.

​The pyramid was built under the Old Kingdom Pharaoh Sneferu and stands at the royal necropolis of Dahshur.

‘So Simple its Laughable’

What makes the Bent pyramid stand out is the fact it has preserved its original outer limestone case. However, according to structural engineer Peter James, author of the book “Saving the Pyramids: Twenty First Century Engineering and Egypt's Ancient Monuments,” this is hardly surprising.

Did you know our CEO has written a book?

“The story of the pyramids and the technical innovation that has gone into saving them is a fascinating tale that should be of interest to all involved in building conservation.” @UWTSD pic.twitter.com/qlkEGvbTg9

​James, Managing Director of Cintec International in Newport, South Wales, UK, who has worked for the past 14 years to preserve the historic buildings and temples of Egypt, claims that ancient Egyptian construction techniques were “so simple that it’s laughable".

“When I was working at the Step Pyramid I was asked to have a look at the outer casing of the Bent Pyramid. It is the only pyramid that still has a large quantity of its casing stones – of the seven great pyramids in that area of the Old Kingdom – all the others have lost theirs,” he was quoted as saying by the Express.

James explained that he was able to unravel the mystery of how ancient workers built the Bent Pyramid differently to the others.

“I wondered why this pyramid, which was the third one built, still had the outer casing on… Then it became fairly obvious that the Bent Pyramid, built at an angle of 54 degrees over 43 degrees, is not one piece – it’s actually a pyramid on top of a trapezoid.”

The Newport-based Egyptologist claims that studies have proved that the Bent Pyramid survived “because of its shape”.

© REUTERS / MOHAMED ABD EL GHANY
Sarcophaguses that are around 2500 years old, from the newly discovered burial site near Egypt's Saqqara necropolis, are seen during a presentation in Giza, Egypt November 14, 2020.

The expert explained the technique resorted to by ancient workers.

“… during the day the Sun would expand the outer casing, which was attached to the main body of the pyramid.Then, as it expanded the joints would open slightly and you would get sand, grit and various other things inside. Then, at night, it would shrink and go back down again.”

“So that one elevation is not as big as the other ones, like the Red Pyramid or the Great Pyramid. The Bent pyramid …didn't have the same amount of expansion.”

The engineer, who has been involved in projects to restore historically significant structures all around the world, including the residence of the British Royal Family, Windsor Castle, and the White House, says:

“You can imagine in the modern world that you wouldn’t build a wall 20 metres long without an expansion joint, but of course they knew nothing of such joints.”

Back in 2013 Peter James vowed to shake up the accepted theories pertaining to how the Egyptian pyramids were built, claiming that the notion that hundreds of workers manoeuvred two million stone blocks up ramps was “impossible”.

Instead, his work deep inside the pyramids has led him to believe that the structures were built from the inside out, with large stones on the outside and small material inside. He also believes that the Great Pyramid of Giza still bears an astounding number of secrets, even though most of the valued items were stolen from the structure in medieval times.

"[The Great Pyramid] is structurally very sound and I’m sure there are holes and voids in there which are part of that… I’m sure there will be more similar discoveries in the future," said James.