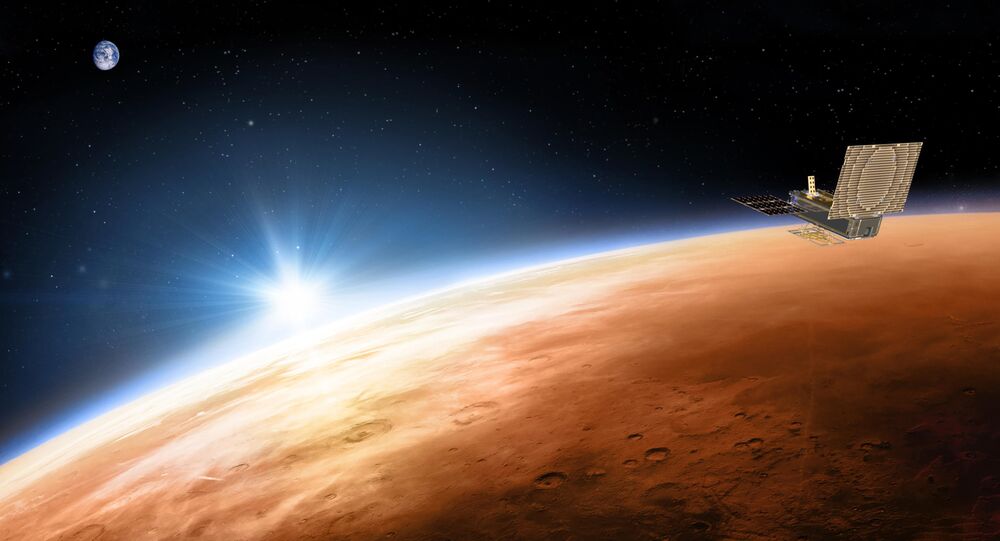 Space blogger Scott Waring claims the "structure" in a NASA panorama is absolutely unique in terms of its ideal geometry, which could only be attained by intelligent life.

Extraterrestrial intelligence conspiracy theorists have long been combing through space research files striving to find plausible evidence of its existence. UFO hunter Scott Waring now claims he may have found some, as he spotted a weird "structure" in an archive panorama taken by NASA's Curiosity Mars rover.

"I was looking over some NASA Mars photos and came across something on a hilltop", Waring posted on his blog ET Data Base depicting an oddly-shaped anomaly, about 2m by 2m (7ft by 7ft) in size.

He took note of how exquisitely shaped the walls forming the structure are:

"Its upper walls were made with horizontal layers, but its doorway was made of vertical layers.That shows intelligent design. That is undeniably alien made", the enthusiastic observer inferred.

Addressing the size of what looks like the roughly 07m x 0.7m square doorway, Waring remarked the builders had to be small enough to squeeze inside.

The most astonishing feature, the UFO hunter believes, are the horizontal lines observed in the structure intermingling with vertical ones.

"This should not be possible but you can see it happening right here – that is just unbelievable", Waring exclaimed, assuming the object was deliberately designed to have a view into the outer world.

"It looks like, because of its placement on this hilltop, with a view of the distant mountains, I believe this is a temple or possibly a military look-out post", he said, claiming the so-called "structure" may be linked to "small figures" he has previously alleged to have found in close proximity to the place.

The alien seeker's claims promptly drew strings of comments on his YouTube channel, with someone nicknamed Redneck Anomalies appearing to be convinced by the claim:

"Who has ever seen sand blow into perfectly straight lines and 90 degree corners?", he wondered.

"Good find, looks like the top of a building area, maybe windows were built around the top for viewing out of", a fellow viewer agreed.

"It looks to me Scott that there's more statue parts laying within yards near the partially sunken doored structure too", a third weighed in.

Another, like Waring, discerned "a structure built by intellect" in the analysed image.

"Interesting old civilisation. There is a lot there that I hope one day we find out. Can't hide it forever", a different viewer noted.

Whatever the case, it could all be about pareidolia - a psycho-physical effect which drives people to see recognisable shapes and patterns even if they are nonexistent. For instance, NASA earlier argued the effect is common among stargazers and space enthusiasts:

"Pareidolia is the psychological phenomenon where people see recognisable shapes in clouds, rock formations, or otherwise unrelated objects or data. There are many examples of this phenomenon on Earth and in space", the space agency, whose Mars 2020 rover mission Perseverance is currently on its way to the Red Planet to search for signs of ancient life, stated.