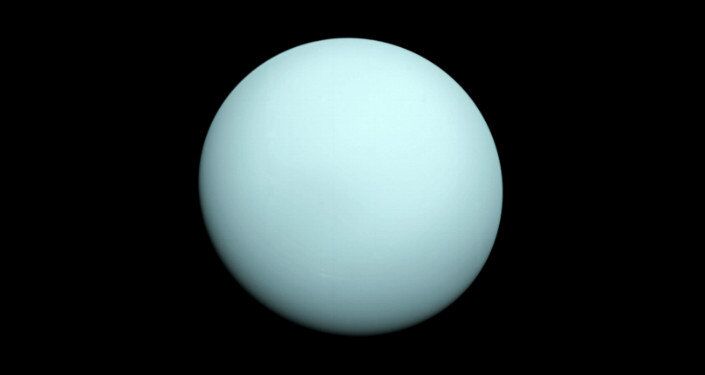 Uranus, a cold, lonely planet situated so far from the Sun that it takes it 84 years to complete an orbit, has long been among the most mysterious planets in our solar system. Located over 3 billion kilometres from Earth, the planet is so far away that astronomers didn’t even know how many moons it had until the mid-80s.

Scientists revisiting old data collected by NASA’s Voyager 2 space probe have discovered new information about Uranus, finding out that the freezing ice giant of a planet has a unique magnetic environment and is leaking its atmosphere into space.

The Voyager 2 carried out a close flyby of Uranus in January 1986, coming as close as 81,500 km from its cloudy atmosphere, providing astronomers with a bevy of new data about the planet and its environs. In addition to radioing back thousands of pictures, the probe found that the planet had 11 additional moons, on top of the 16 already known about, and revealed the presence of two new rings never seen before.

The probe also revealed that Uranus’s protective magnetic field was unusual, in that instead of originating from the planet’s geomagnetic center, it’s shifted toward the south rotational pole by as much as a third of the planet’s radius, resulting in an extremely asymmetrical magnetosphere. This, it is believed, leaves part of the planet vulnerable to harmful solar rays.

Now, Dr. Gina DiBraccio and Dr. Daniel J. Gershman, a pair of researchers from the NASA Goddard Space Flight Center in Greenbelt, Maryland, have discovered a new, exciting tidbit of information among the data collected in 1986 which was never reported on before, and which may change astrophysicists’ understanding of Uranus forever.

In an article in the peer-reviewed Geophysical Research Letters journal, the scientists explain that they had discovered that during its flyby 34 years ago, the Voyager 2 had actually passed through a massive 204,000 km long, 400,000 km wide magnetic plasmoid, a massive bubble of electrified gas which may have been pulling bits of Uranus’s atmosphere into space. This, scientists postulate, may help explain how the icy planet has been losing its atmosphere.

Uranus is already an oddball, according to NASA, as it spins “almost perfectly on its side – like a pig on a spit roast- completing a barrel roll once every 17 hours. Its magnetic field axis points 60 degrees away from that spin axis, so as the planet spins, its magnetosphere – the space carved out by its magnetic field – wobbles like a poorly-thrown football.”

Scientists say they may have revealed the first-ever confirmed plasmoid activity on the planet, as well as its impact. DiBraccio and Gershman found out that Voyager 2 passed through the magnetic plasmoid after downloading the probe’s magnetometer data, finding it as a tiny 60 second blip in the probe’s 45 hours-worth of Uranus flyby data.

The researchers believe the plasmoid’s cylindrical shape means it likely formed as bits of Uranus’s atmosphere made their way into space, with this process theorized to explain how the planet lost between 15 to 55 percent of its atmospheric mass.

The next step, NASA hopes, will be to send more probes to the ice giant to collect additional data.