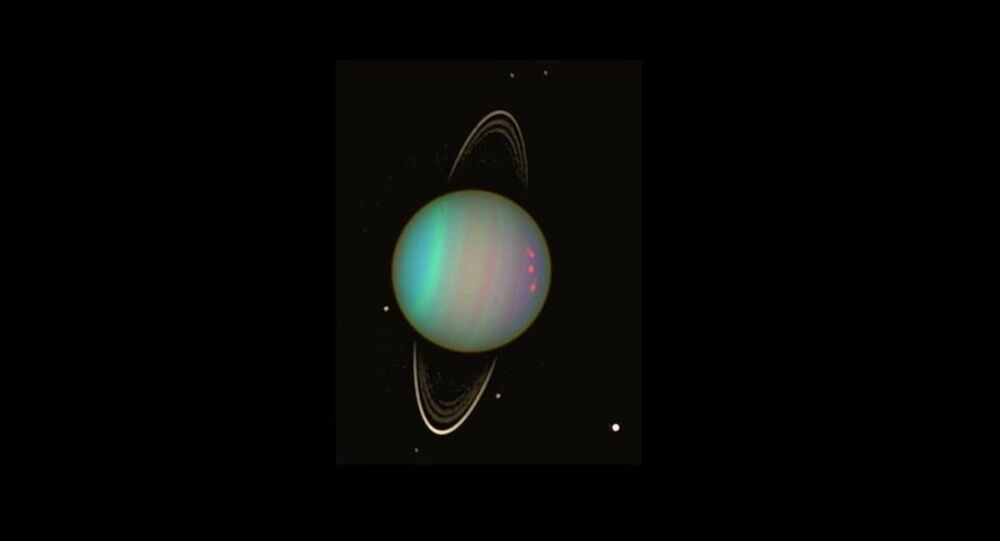 When NASA's Voyager 2 spacecraft arrived to study planets Uranus and Neptune in the 1980s, it found that both ice giants boasted unusual magnetic fields, offset from the axis they rotate around. Subsequent studies suggest a bizarre state of water with both solid and liquid properties might offer a solution to the mystery.

New research conducted by a team of scientists might possibly have offered a solution to the mystery surrounding ice giants Uranus and Neptune’s bizarre magnetic field.

The two planets’ magnetic fields are offset from their physical centre and strongly tilted in relation to their rotational axes – 47° on Neptune and 59° on Uranus.

A metallic liquid, called Trihydrogen oxide (H3O), that forms when water and hydrogen meet under the extreme conditions inside the planets – up to 600GPa and 7000K (6727°C) - might be the underlying reason for this phenomenon, according to research entitled “Stability of H3O at extreme conditions and implications for the magnetic fields of Uranus and Neptune”.

Published in the Proceedings of the National Academy of Sciences of the United States, the peer-reviewed study was led by Dr. Russell J. Hemley of the Department of Physics, University of Illinois, Chicago, and Dr. Chunhong Long, School of Science, Chongqing University, China.

Riddle of the Ice Giants

Planet Earth’s magnetosphere is generated in its molten iron core.

However, Uranus and Neptune are different in that they are thought to contain a solid core surrounded by a metallic liquid layer. The nature of this layer, responsible for powering the internal movement, has puzzled scientists.

However, after conducting quantum mechanical calculations, the collaborator study discovered that the magnetosphere-generating layer could be made up of trihydrogen oxide.

© NASA . ESA/GSFC/JPL
This is a composite picture showing images of storms on Neptune from the Hubble Space Telescope (left) and the Voyager 2 spacecraft (right)

Previous studies have suggested that water in such a superionic ice form might hold the key to explaining the nature of the magnetic fields of Nepture and Uranus.

Research along these lines was published in February 2018, when a study discovered a new form of water ice that was both a solid and a liquid at the same time.

One of the most intriguing properties of water is that it may become superionic when heated to several thousand degrees at high pressure, similar to the conditions inside Uranus and Neptune.

They resorted to powerful lasers to exert pressure more than a million times that of Earth's atmosphere on water to heat pressurised ice in a lab.

However, H3O is much less viscous than superionic ice, becoming a metallic fluid at 5000K and 540GPa.

This data suggests to scientists it is a more likely force powering the dynamo of the two planets.

Further experiments to prove the researchers’ calculations are required, as techniques to generate pressures and temperatures needed to form solid H3O already exist.