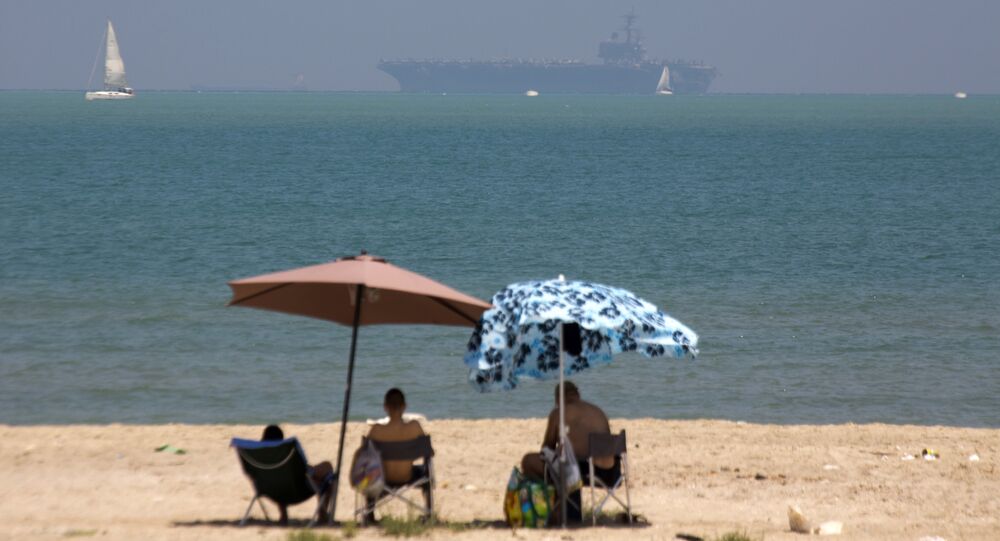 The big stone, thought to have been used by ancient travellers during the Bronze Age as an anchor, has an image of a defaced Egyptian goddess. As historians suggest, it originated in an ancient temple, but it remains an enigma as to how it ended up on the seabed off the northern coast of Israel.

The ancient anchor, decorated with Egyptian hieroglyphs and an image of a goddess, has made Israeli historians beat their brains trying to reconstruct how it made its way from an ancient temple in the land of the pharaohs to the bottom of the Mediterranean near Haifa, Haaretz reports.

The mysterious stone with inscriptions was discovered by 55-year-old veterinarian What Bahalul during a swim last year. The discovery turned out to be a 3,400-year-old stone anchor, allegedly washed off during a storm, experts from the Israel Antiquities Authority have concluded.

“This was a known site from which other finds have emerged, but we were not digging there at the time. Sometimes the sea does our job for us, and fortunately a member of the public saw it and alerted us”, the head of the IAA’s maritime archaeology unit, Jacob Sharvit, said.

While the function of the trapezoid-shaped stone with a hole at the top was no riddle for scientists, who have found such artefacts before, this particular anchor stands out from their earlier finds as it is unusually decorated.

The explanation is that the feature is an example of ancient recylcing (or secondary use, as archaeologists define it) as it allegedly used to be part of a decorative limestone relief in some Egyptian temple or royal precinct, later separated with a chisel. As a curator of Egyptian archaeology at the Israel Museum in Jerusalem, Shirly Ben-Dor Evian, told the outlet, this was common practice in Egypt, where stones were relatively scarce.

The researcher explained that the most telling part is the image of a woman writing, identified as the “divine scribe, librarian, record-keeper and engineer” Seshat by the symbol above her head. This ancient Egyptian goddess of writing did not have her own shrines, but was often pictured on the walls of other major buildings.

However, which temple the stone originated from and whether the structure was renovated, abandoned, or destroyed at some point, is still being looked into.

The outlet also points out that the goddess was seemingly defaced on purpose, which puzzles scientists. Ben-Dor Evian favours a theory that this was an act of respect before reusing the stone as an anchor.

“When you take something sacred and reuse it for a secular purpose you have to make it non-sacred first. You cannot use the image of a goddess as an anchor, so you deface it and then it’s no longer a goddess”, she said.

However, there is a more complicated possibility that the goddess fell victim to a political or religious conflict that resulted in an iconoclastic campaign as new rulers tried to erase any mention of rival predecessors.

© Photo : LIAT NADAV-ZIV/ISRAEL ANTIQUITIES AUTHORITY
'Arabian Nights Treasure': Cache of Ancient Gold Coins Found by Archaeologists in Israel
The researchers also hope that the find could help shed light on the trade relations during the Bronze Age if it is discovered to have belonged to a merchant ship. As Sharvit revealed to Haaretz, other ancient artefacts found at the site near the Seshat anchor suggest that an entire ship was lost.

“During the Late Bronze Age, there was an explosion of trade, but there is always a question of who was doing all the trading, was it the Egyptians themselves, or was it say, Canaanites who were licensed by the Egyptians. This find clearly identifies at least some of the traders as Egyptians who were under the direct control of the pharaohs, because otherwise they wouldn’t have had access to the stones of whatever sacred precinct this relief was taken from”, he explained.