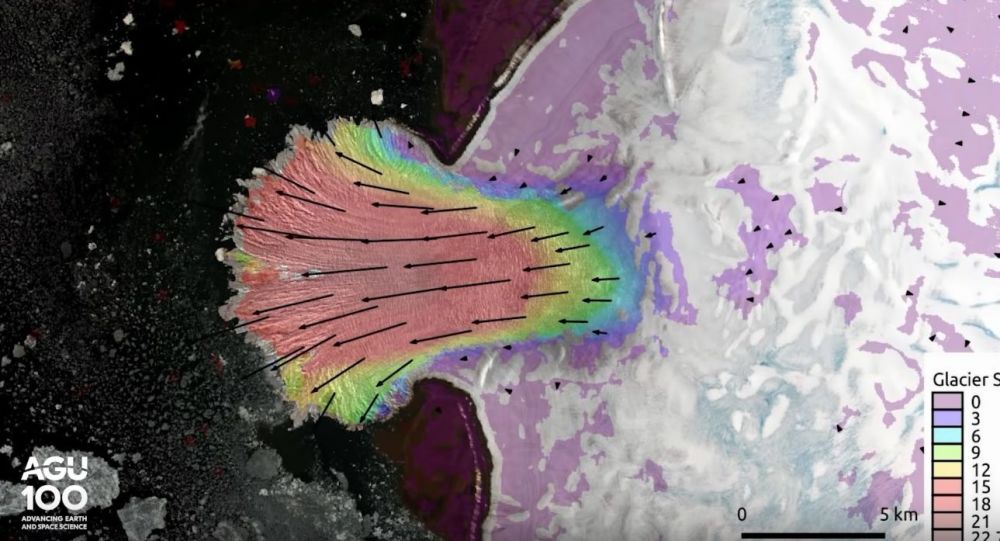 The event was captured by satellites observing the eastern side of October Revolution Island in Siberia’s Krasnoyarsk region over a period lasting nearly seven years.

Geologists from Cornell University used satellite imagery to observe the creation of a massive, fast-moving ice stream, watching the Vavilov Ice Cap on a major island in Russia’s far north as it began rapidly spewing a stream of ice into the Arctic Sea.

The researchers, who published their findings in the Geophysical Research Letters Journal, also compiled a video showing the movement of the ice flow into the adjacent Arctic waters between 2013 and spring 2019, with the stream pushing out of the ice cap, and the flow gradually expanding and accelerating.

According to the scientists, the outflow followed the ice cap’s partial collapse, leading to a nearly 11 percent loss in its total mass, comprising some 9.5 billion tonnes of ice, during the seven year period of observation. Scientists fear the ice stream will become even stronger in the future, possibly leading to a rise in sea levels.

Whyjay Zheng, a doctoral student at Cornell’s department of Earth and Atmospheric Sciences, was quoted by Science Daily saying that the phenomenon he and his fellow researchers discovered was unique, as they initially believed they were witnessing a glacial surge – a temporary condition in which snow can be seen ebbing and flowing over long periods of time.

In reality, what they were witnessing was “the first documented case of an ice stream being formed. We really didn’t expect to see this,” the researcher said. “In the satellite images, it seems like the entire west wing of the ice cap is just dumping into the sea. No one has ever seen this before,” he added.

According to Zheng, the 9.5 billion in lost mass is not possible to recover. “Now once the ice is lost, it is lost. Suddenly we have more water in the oceans,” he said.

Before the formation of the Vavilov ice stream, the only other places where geologists had previously spotted ice streams were in Greenland, and Antarctica.

The Vavilov Ice Cap is one of five domed ice caps located on October Revolution Island, a 14,000 km land mass in the Severnaya Zemlya group of islands in the Russian Arctic, part of the vast Siberian region of Krasnoyarsk.

“This glacier went from doing basically nothing to doing something very unusual – evolving into an ice stream,” Dr. Mathew Pritchard, study’s coauthors and professor at Cornell’s Earth and Atmospheric Sciences department, said. According to Pritchard, more studies will be required to fully understand the river of ice being formed at the Vavilov Ice Cap, particularly given the fact that the region is not known as a place where global warming has hit particularly hard.

Earlier this month, the United Nations’ World Meteorological Organisation reported that 2019 was shaping up to conclude the hottest decade ever-recorded, with global warming, retreating ice and rising sea levels blamed on man-made  greenhouse gases. According to the UN, average temperatures this year were about 1.1 degrees Celsius above those of the pre-industrial era.

Last week, the United States National Oceanic and Atmospheric Administration published a report indicating that Arctic surface temperatures this year were the warmest since the year 1900. According to the agency, the average temperature at the North Pole between October 2018 and September 2019 was 1.9 degrees Celsius higher than the average between 1981 and 2010.