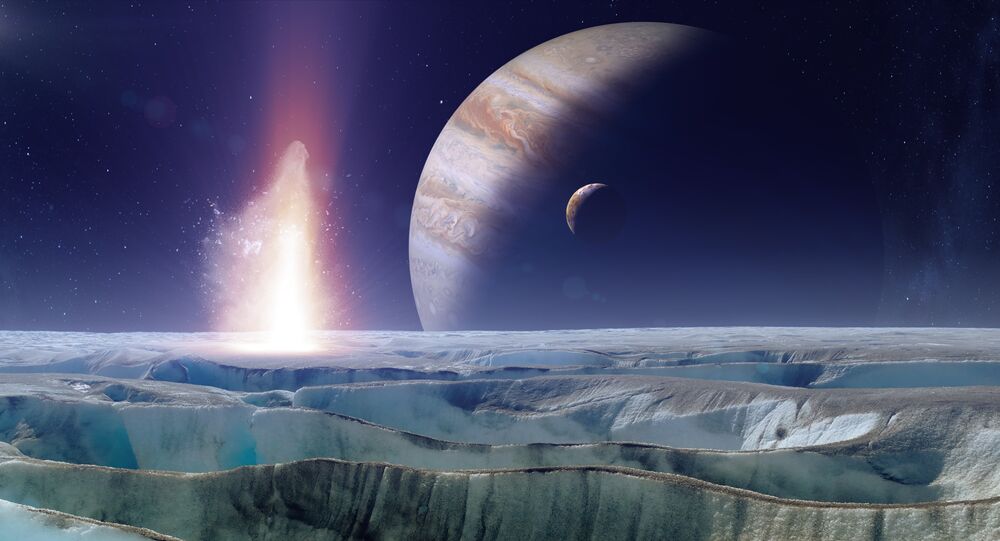 Scientists hope that one day the submersible will be sent to Jupiter’s moon Europa, which reportedly has more water than all of the Earth’s oceans and is considered one of the highest priority targets in the search for extraterrestrial life.

NASA is preparing to test a prototype of its robot called Buoyant Rover for Under-Ice Exploration (BRUIE) in Antarctica’s sea ice with hopes that the rover will then be sent to other planets where it will gather samples and take pictures while searching for alien life. The rover, which looks like a hand weight with two wheels on each side, uses buoyancy to manoeuvre along the underside of the ice. Unlike EurEx, another robot which is also expected to look for extraterrestrial life, BRUIE is unable to study the depths of alien seas and will focus on examining an area where water meets with ice, as scientists say that there is a potential to find signs of life there.

"We've found that life often lives at interfaces, both the sea bottom and the ice-water interface at the top. Most submersibles have a challenging time investigating this area, as ocean currents might cause them to crash, or they would waste too much power maintaining position”, said Andy Klesh, the lead engineer on BRUIE, in a statement.

BRUIE’s buoyancy enables withstanding the above-mentioned challenges, allowing it to be impervious to water currents and remain anchored against the ice.

Getting the rover to work on Saturn’s moon Enceladus and Jupiter’s moon Europa, which scientists assume have vast amounts of water and hence may have signs of life, will be an extremely complicated task. BRUIE has to dig through thick layers of ice crust - measuring several kilometres - and its electronics may work inaccurately on Europa due to the close proximity to Jupiter and its damaging radiation.

Scientists have already tested the apparatus in the Arctic and Alaska and are preparing for a trial in the waters of Antarctica. “We will trial the endurance of the rover, particularly how long the batteries can last in extreme field conditions and how it handles a variety of terrain”, Andy Klesh said in a statement.

Scientists say BRUIE is designed to turn itself on and off while gathering data, which enables it to stay under the ice without recharging for longer periods of time. The rover is equipped with several instruments that measure water temperature, salinity and oxygen levels. Researchers admit that identifying potential signs of life can be quite tricky, as they may differ from those on Earth.

"We only really know how to detect life similar to that on Earth", Dan Berisford, a mechanical engineer on the project, said in NASA's statement. "So it's possible that very different microbes might be difficult to recognise".