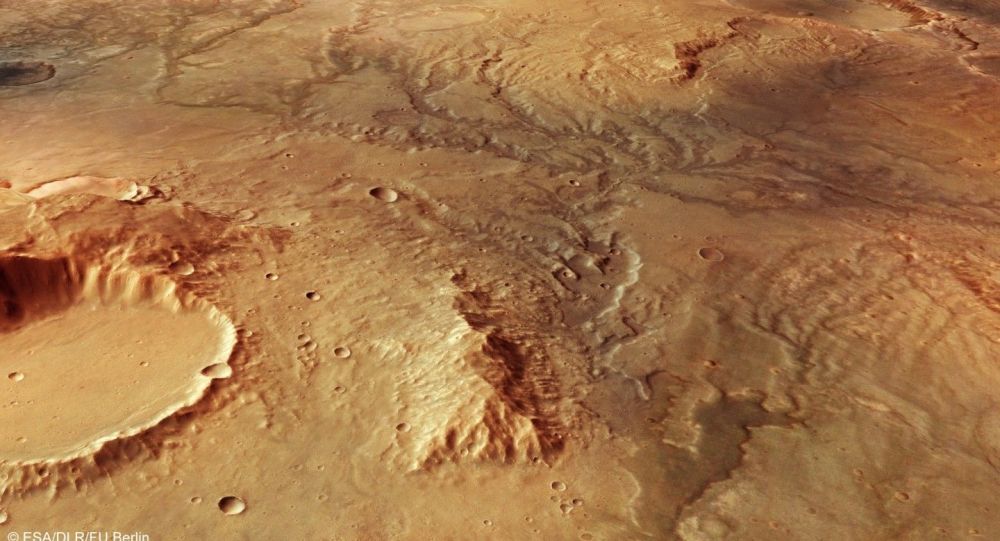 The ESA’s Mars Express Orbiter is imaging and mapping the entire surface of Mars with the help of its High Resolution Stereo Camera, in a long-term effort to help unlock some of the secrets of the red planet.

The European Space Agency (ESA) has released new images of an ancient, dried-up river system stretching nearly 700 kilometres across the surface of Mars.

The Nirgal Vallis region, visible in photos from ESA’s Mars Express spacecraft, is just south of the planet’s equator, and an area that was shaped by a mix of flowing water and impacts where rocks from space had crashed, the ESA shared in a press release.

Impact craters of different size can be seen dotted across the surface of the planet.

By exploring the characteristics of the surrounding craters, the European Space Agency has estimated the river system’s age to be between 3.5 and 4 billion years old.

The valleys pictured are about 656 feet deep and 6,561 feet wide, with sandy dunes blanketing the floor.

“We see valleys like this often on Earth, including valleys found in the Chilean Atacama Desert, the Colorado Plateau, and on the islands of Hawaii,” the ESA explained.

Scientists believe that Nirgal Vallis formed in a similar way to valleys we see on Earth.

As there appear to be no branching, tree-like tributaries feeding into the main valley of Nirgal Vallis, it is likely that water was replenished on ancient Mars by a mix of precipitation and overland flow from the surrounding terrain.

The system may also have its roots in a process known as groundwater sapping, as water continually seeps laterally through material in layers beneath the surface.

This mechanism on Earth is visible where surface material is very fine and loose and thus difficult for water to penetrate.
The existence of ancient rivers on Mars shows that it once had a much warmer, wet and Earth-like climate.

The Mars Express spacecraft captured these observations using its High-Resolution Stereo Camera, which the ESA is using to map the whole surface Mars in full colour and high resolution.

Evidence of water on Mars dates back to the Mariner 9 mission, in 1971, that revealed clues of water erosion in river beds and canyons.

The planet is currently in the middle of an ice age, and previously scientists believed liquid water could not exist on its surface.

In June 2013, Curiosity found powerful evidence that water once flowed on Mars, as in September that year the first scoop of soil analysed by Curiosity rover revealed that fine materials on the surface of the planet contain two per cent water by weight.

Current findings suggest there was ample time and water for life on Mars to thrive, but over the last 3.7 billion years the red planet has lost 87 per cent of its water - leaving it barren and dry.

The ESA Mars Express spacecraft is using its High Resolution Stereo Camera to map the surface of Mars in high resolution, to be supported by the ESA-Roscosmos ExoMars Trace Gas Orbiter, which arrived at Mars in 2016, and the ExoMars Rosalind Franklin rover and its accompanying surface science platform, set to arrive next year.

These missions will hopefully be conducive to unlocking the many mysteries of the Red Planet.