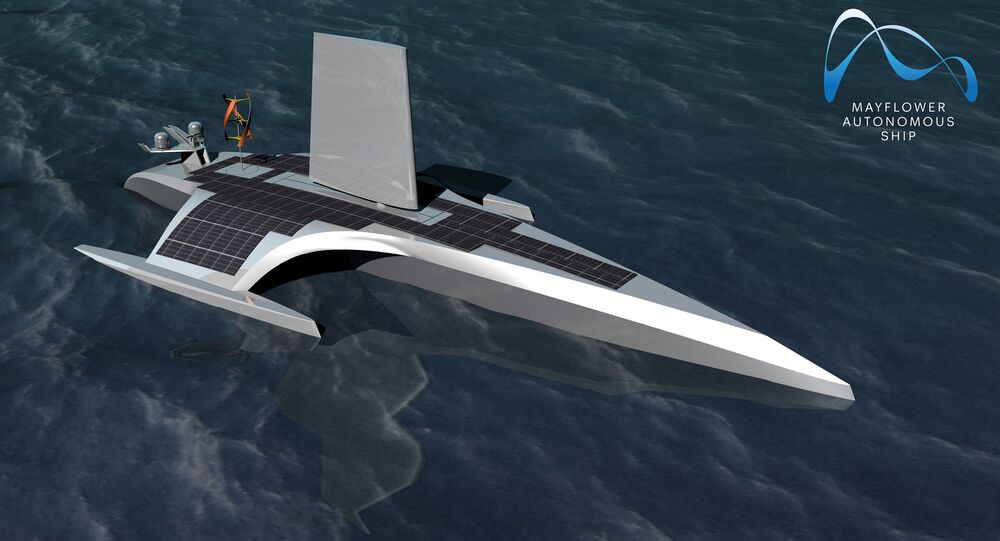 The project, known as ‘Mayflower Autonomous Ship’ (MAS), is expected to set sail in September 2020, on the 400th anniversary of the start of the original Mayflower’s journey from England to bring religious puritans known as the Pilgrims to North America.

US computer giant IBM is partnering with marine research organisation ProMare and the University of Plymouth on the Mayflower project, with the project set to use IBM’s artificial intelligence, servers, cloud and edge computing technologies to make its 5,000+ km journey across the North Atlantic next year, the company announced in a press release Wednesday.

The 15-metre long wind, solar and diesel turbine-powered ship is expected to independently navigate its way from Plymouth, England to Plymouth, Massachusetts starting 6 September 2020, and avoid hazards including other ships, buoys, and various natural and man-made obstacles using onboard radar, automated identification systems and LIDAR (light detection and ranging), a technology used in driverless cars. Work on the project began in 2014.

“If successful, it will be one of the first self-navigating full-sized vessels to cross the Atlantic Ocean and will open the door on a new era of autonomous research ships,” the release said.

Designed by Whiskerstay Ltd and M Subs, the Mayflower’s hull is being built in Gdansk, Poland by a local shipbuilding company specialising in aluminium ships.

MAS director Brett Phaneuf said the project is aimed at “pioneering a cost-effective and flexible platform for gathering data that will help safeguard the health of the ocean and the industries it supports”.

Andy Stanford-Clark, chief technology officer at IBM UK and Ireland, boasted that IBM has already helped in the effort to take humans to the Moon, “and is excited by the challenge of using advanced technologies to cross and research our deepest oceans”.

Artificial intelligence technologies have become a prominent feature of radically advanced systems being developed by companies and countries around the world for use in a wide variety of fields. The prospect of the widespread deployment of AI has resulted in widespread debate, with some scientists warning that such systems could be used to wage war and even threaten humanity’s survival, while others say that the tech could be used to improve lives and even solve some of the planet’s pressing problems.

Earlier this year, Dr. James Lovelock, one of Britain’s most respected scientists and futurists, predicted that although artificial intelligence systems would probably come to rule the Earth by the end of the 21st century, they won’t necessarily seek to rise up and destroy humanity, but interact with it to create a complex self-regulating synergistic system to help perpetuate life on the planet.

Grim Picture of Futuristic Battlefield: AI will Decide Who Lives and Dies, US Army Official Says