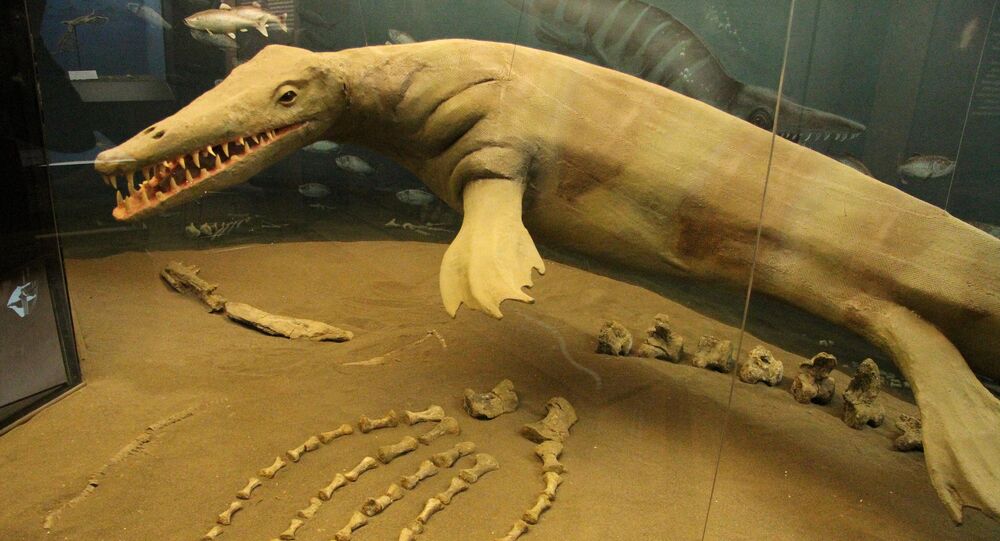 The gigantic creature whose remnants the miners found was apparently the apex predator of its era, hunting and devouring anything that was swimming in the sea at the time.

The fossilised remains of a massive prehistoric reptile that ruled the seas about 70 million of years ago, known as mosasaur, was recently unearthed by miners in Canada, CBC reports.

Commenting on this development, Royal Tyrrell Museum of Palaeontology's director of resource management Dan Spivak described the find as something that "looks a little bit like a swimming Komodo dragon, maybe with a bit pointier nose", whose skull itself is about a metre long with sharp pointy teeth and a real mean look on its face".

He also remarked that there’s currently no comparable species living on our planet, and that during their time, these reptiles, nicknamed "T-Rex of the Deep" by a Discovery Channel documentary, were true "apex predators".

"These things would be swimming around in what would have been a shallow sea that covered a large part of Alberta 70, 72 million years ago, feeding on turtles and ammonoid and fish — and pretty much anything else that they could have got their teeth into", Spivak said.

Last month, scientists working on an island off the Antarctic Peninsula also successfully excavated the remains of another massive aquatic reptile, elasmosaur, which dwelled in the seas of the Cretaceous period during the time of the dinosaurs.