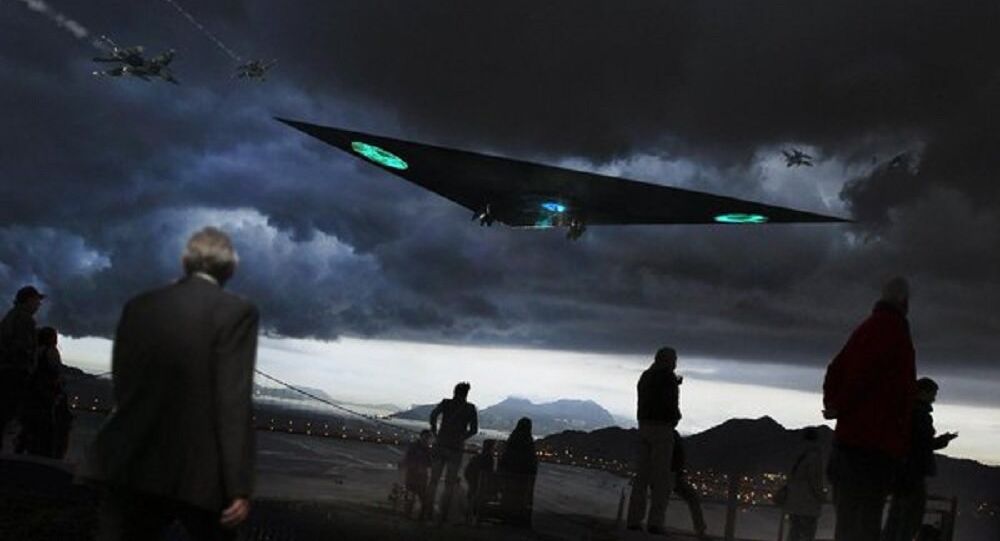 A notable UFO investigator who formerly worked for the British military noted that the design of the craft described in the patent looks similar to that of a suspected UFO allegedly encountered by US fighter pilots over the Pacific fifteen years ago.

A US Navy scientist named Salvatore Cezar Pais has filed a patent for an unusual flying craft that employs an "inertial mass reduction device" to attain "extreme speeds", and which looks like something straight out of conspiracy theories about military testing UFO-style flying machines, Metro reports.

© CC0
UFO or Secret US Aircraft? Woman FILMS Mystery 'Craft' Flying Over San Antonio
According to the newspaper, the patent describes methods of reducing an aircraft’s mass via methods which include the generation of gravity waves, and that the craft’s design would allow it to create a vacuum around itself and, thus allowing it to move at high speeds in air, water, or even in space.

"It is possible to envision a hybrid aerospace/undersea craft (HAUC), which due to the physical mechanisms enabled with the inertial mass reduction device, can function as a submersible craft capable of extreme underwater speeds… and enhanced stealth capabilities", the patent states. "This hybrid craft would move with great ease through the air/space/water mediums, by being enclosed in a vacuum plasma bubble/sheath".

Nick Pope, former UFO investigator at the British Ministry of Defence, also told the newspaper that the patented design bears a remarkable similarity to "what was reported in the USS Nimitz incident from 2004", referring to an instance of US warplanes’ radar-visual encounter with an unidentified flying object over the Pacific Ocean.

"There was a similar incident of a UFO flying underwater in Puerto Rico in 2013. The possible connection between the USS Nimitz incident and this patent is intriguing, and it’s interesting that the US Navy seems to be the link here", Pope observed. "It’s possible that the patent is inspired by the incident and is part of an attempt to work out the technology behind the objects that were chased by the Navy F-18s. This is known as ‘reverse-engineering’".

He also pointed out that if the US military actually managed to build the technology described in the patent, such a programme would be highly classified, adding that "if any of this works, we’re in game-changing territory".

Truth is Out There: Possible UFO Spotted on VIDEO of Chinese Spaceships Docking