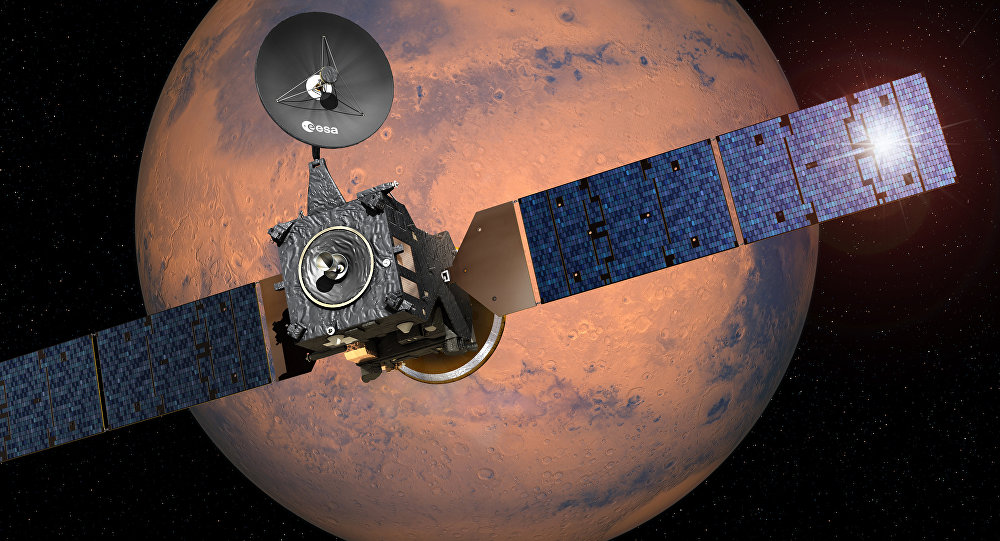 Mars Express, a space exploration mission launched by the European Space Agency with Russian assistance in 2003, earlier unveiled images that showed “clear signs of past water activity tracing across the Martian surface”.

In a study published in the Journal of Geophysical Research: Planets, Mars Express researchers have explored 24 deep, enclosed craters in Mars’ northern hemisphere and claim to have found the first geological evidence of an interconnected water system deep beneath the surface of our smaller, redder neighbour.

© CC BY 2.0 / Kevin Gill / Mars
Red Tide? Underground Water Reservoir Found Beneath Mars’ South Pole
These underground water reservoirs are believed to be former lakes, which hold key minerals that play a crucial role in the existence of life.

Each of the craters descend some 4,000 metres below Martian “sea level”, and numerous characteristics seen at depths 4,000-4,500 metres suggest that there’s water, with evidence of pools and flows that have changed over time.

According to the scientists, this includes channels and valleys, as well as fan-shaped deposits of sediments.

“Early Mars was a watery world, but as the planet’s climate changed this water retreated below the surface to form pools and ‘groundwater’. We traced this water in our study, as its scale and role is a matter of debate, and we found the first geological evidence of a planet-wide groundwater system”, said lead author Francesco Salese of Utrecht University in the Netherlands.

The researchers believe that this discovery may indicate that there used to be a Martian ocean three to four billion years ago.

“We think that this ocean may have connected to a system of underground lakes that spread across the entire planet. These lakes would have existed around 3.5 billion years ago, so may have been contemporaries of a Martian ocean”, co-author Gian Gabriele Ori, director of the Universita D’Annunzio’s International Research School of Planetary Sciences, Italy.

In 5 of the 24 craters, scientists detected an array of clays, carbonates, and silicates, which are closely linked to the emergence of life on Earth, and propping up the theory that Mars, similarly, once had the necessary components for life.

“Findings like this are hugely important; they help us to identify the regions of Mars that are the most promising for finding signs of past life. It is especially exciting that a mission that has been so fruitful at the red planet, Mars Express, is now instrumental in helping future missions such as ExoMars explore the planet in a different way. It’s a great example of missions working together with great success”, Dmitri Titov, an ESA Mars Express project scientist, said.

ExoMars, a joint mission of the European Space Agency and Russia’s space corporation Roscosmos, is seeking to find evidence of life on Mars.