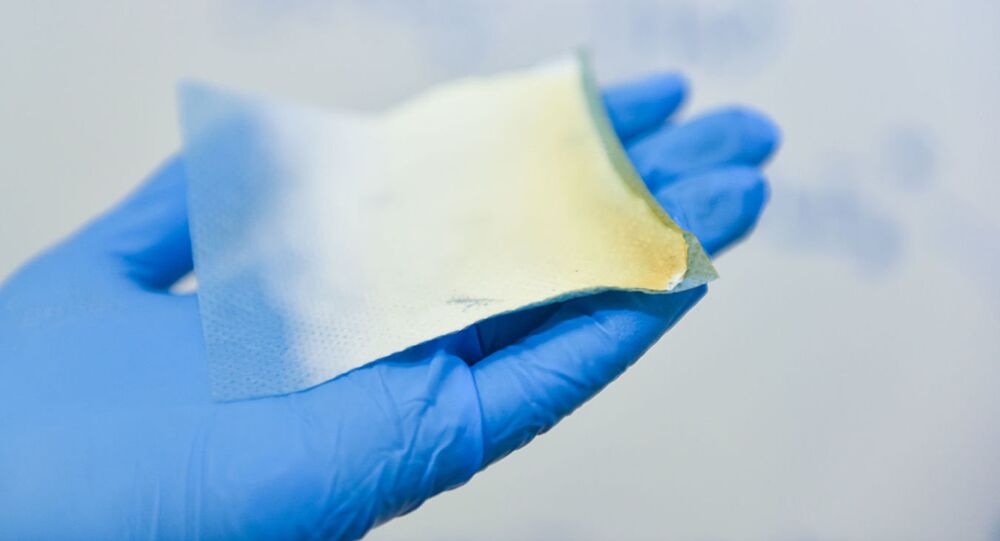 Dissolving on the Skin: Wound Dressing Material That Accelerates Healing

A team of scientists from the MISiS National University of Science and Technology with colleagues from the Central European Institute of Technology (Brno, the Czech Republic) and other Czech universities has developed a biodegradable material with antibacterial action to use as a dressing on damaged skin.

Bandages made from the material have a pinpoint effect; they remain effective for a long time and do not need to be changed — a new dressing can be put right on top of the previous one.

© CC0 / Pixabay
Exotic Material Found in Medieval Skeleton's Teeth is a 'Bombshell' Discovery
The history of wound dressings has many milestones, linked to the names of Hippocrates, Paracelsus and other world-famous healers. Ancient linen and wool bandages were impregnated with oils. In the 19th century, Nikolai Pirogov proposed the antiseptic treatment of wounds — washing them with a solution and using gauze dressings to increase the outflow of fluids.

However, even modern treatments for burns and cuts, requiring antiseptics, the use of antibiotics and a regular change of dressings, cause side effects. Antibiotics kill not only dangerous microorganisms but also beneficial bacteria. In addition, changing dressings disturbs the integrity of the newly-healed skin, which is quite painful for patients.

MISiS scientists and their European colleagues have developed a biocompatible dressing material that can act locally on the inflammatory focus without even needing to be changed — after releasing the antibiotic, the dressings will gradually dissolve on the skin. If necessary, a new bandage can be applied on top of the old one.

"We developed a wound dressing based on polycaprolactone (PCL) nanofibers — a biocompatible self-absorbable material — and grafted gentamycin (GM, a broad-spectrum antibiotic) onto the surface of these nanofibers. It is interesting that the material has shown a prolonged effect: we observed a significant decrease in the number of bacteria even 48 hours after the material was applied. Usually, the surface with the antibacterial effect has exhausted its potential during the first day or even a few hours of use," said one of the authors of the study, researcher at MISiS inorganic nanomaterials laboratory Yelizaveta Permyakova.

As the scientists note, the material has potential not only for skin but could also be used in the treatment of inflammatory bone diseases such as osteoporosis and osteomyelitis.

The scientists continue to test and improve the material: their plans include grafting other antibiotics, such as ciprofloxacin, on the fibers. It is a new generation antibiotic, therefore most types of bacteria have not yet developed resistance to it.

In addition, it is planned to increase the efficiency of the material through the creation of multilayer samples (antibiotic, heparin to reduce blood clotting in the wound surface and again the antibiotic).