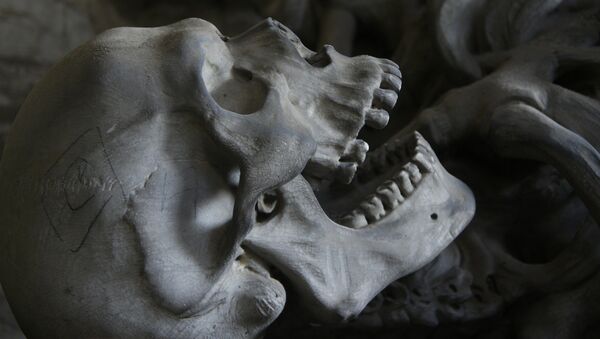 Blue-coloured particles discovered in the teeth of an ancient skeleton buried at a German monastery have given scientists insight into who produced books in medieval Europe.

According to an international team of researchers, who published their findings in Science Magazine, the remains belonged to a religious middle-aged woman, a nun, most likely. Scientists from a Germany-based laboratory identified the mysterious particles as lapis lazuli, a semi-precious stone mined only in Afghanistan and thus considered extremely rare and expensive in Europe a thousand years ago.

Lapis lazuli was applied as a pigment in jewellery and carvings, but what drew the scientists' interest was its ornamental use in religious books.

"Within the context of medieval art, the application of highly pure ultramarine in illuminated works was restricted to luxury books of high value and importance, and only scribes and painters of exceptional skill would have been entrusted with its use," the study says.

The ultramarine pigment that was preserved in the nun's teeth dates back to the 10th-12th century, radiocarbon dating has revealed. It is the earliest evidence to date that religious women in Germany used this material in the making of illuminated texts.

While the scientists did not rule out that the nun could have come into contact with the rare material through kissing paintings, the most likely explanation is that she painted religious books or prepared the pigment.

It's widely believed that the books were made and written by monks rather than nuns, as medieval books contain significantly fewer signatures from female scribes. The new findings, however, provide evidence that religious women were not only literate but also "played a particularly active role in book production".

"It's kind of a bombshell for my field — it's so rare to find material evidence of women's artistic and literary work in the Middle Ages," said Professor Alison Beach from Ohio State University.

"Because things are much better documented for men, it's encouraged people to imagine a male world. This helps us correct that bias. This tooth opens a window on what activities women also were engaged in."