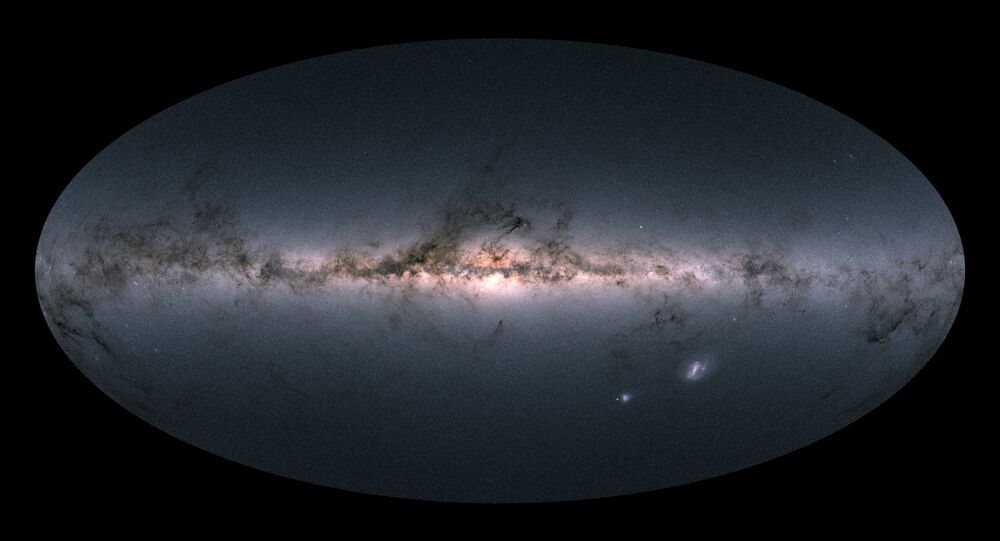 A team of astronomers using the Gaia satellite have found a “ghost” galaxy haunting the outer edges of our own. The bizarre object is three times bigger but 10,000 times fainter than the Large Magellanic Cloud (LMC), which also orbits the Milky Way.

The dwarf galaxy identified as Antlia 2 evaded scientists until now because it hides behind the Milky Way's galactic disk, but that's not the only reason scientists are fascinated by "Ant 2."

Either it's too big for its luminosity or it's too dim for its size, Phys.org reported. It doesn't look like a dwarf galaxy, either, being much too large, nearly one-third the size of the Milky Way, yet far dimmer than the LMC, which is three times smaller than Ant 2.

"This is a ghost of a galaxy," said Gabriel Torrealba, lead author of the paper describing the discovery, which was published on November 9. "Objects as diffuse as Ant 2 have simply not been seen before. Our discovery was only possible thanks to the quality of the Gaia data."

The international research group found Ant 2 using data from the Gaia spacecraft, a European Space Agency satellite that's been compiling the most detailed and expansive catalog of stars in the Milky Way ever constructed. In May, the ESA released a "map of the Milky Way" that catalogued 1.3 billion interstellar objects, about 1 percent of the content of our galaxy.

Gaia's precision measurements provided the researchers with data on metal-poor RR Lyrae stars, a type of small, ancient star that pulses regularly, changing its brightness every 12 hours or so, Astronomy Now reported.

"The satellite was identified using a combination of astrometry, photometry and variability data from Gaia Data Release 2, and its nature confirmed with deep archival DECam imaging, which revealed a conspicuous BHB [blue horizontal branch] signal in agreement with distance obtained from Gaia RR Lyrae," the study says.

"From these properties we conclude that Antlia-2 inhabits one of the least dense Dark Matter (DM) halos probed to date. Dynamical modelling and tidal-disruption simulations suggest that a combination of a cored DM profile and strong tidal stripping may explain the observed properties of this satellite."

"RR Lyrae had been found in every known dwarf satellite [galaxy], so when we found a group of them sitting above the Galactic disc, we weren't totally surprised," said co-author Vasily Belokurov from Cambridge's Institute of Astronomy. "But when we looked closer at their location on the sky, it turned out we found something new, as no previously identified object came up in any of the databases we searched through."

Another strange property of Ant 2's size is that it could re-write what we think we know about dark matter, an elusive material never before observed directly but postulated to exist, according to holes in existing knowledge about the universe. To put it simply: a galaxy shouldn't be able to be this big but also this devoid of stars: either it should disperse, or it should be drawn into a smaller formation.

One theory is that Ant 2's stars had an unusual propensity for large formation and then explosion via supernovae, which might have pushed its mass further and further out. But "even if star formation could reshape the dark matter distribution in Ant 2 as it was put together, it must have acted with unprecedented efficiency," co-author Jason Sanders of Cambridge University told Phys.org.

Sergey Koposov, another contributor to the study from Carnegie Mellon University, noted that Ant 2 appears to have have had most of its stars stolen or spiraled off by the powerful gravity of the Milky Way, which it orbits at a steady 130,000 light-year distance.

"What remains unexplained, however, is the object's giant size. Normally, as galaxies lose mass to the Milky Way's tides, they shrink, not grow," Koposov said.

Co-author Matthew Walker, also from Carnegie Mellon, mused that astronomers may find other, similar "ghost" galaxies haunting the outer edges of our galactic cluster. "We are wondering whether this galaxy is just the tip of an iceberg."