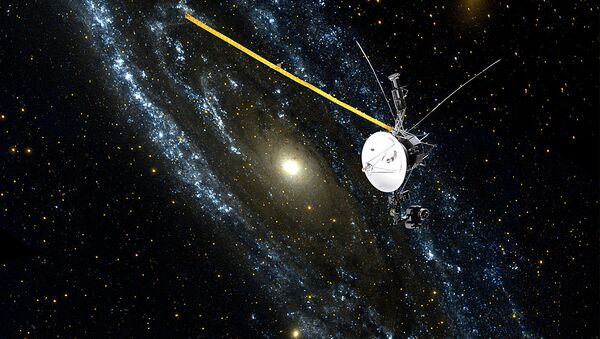 © NASA/JPL/Caltech
Subscribe
Judging by a recent increase in cosmic rays, scientists estimate that the Voyager 2 probe may be nearing the edge of the solar system. Once it passes through the heliopause, the 41-year-old probe will become only the second man-made object to enter interstellar space.

The two Voyager probes have been on a deep space sojourn since 1977, and Voyager 2 has covered roughly 11 billion miles in that time, or more than 118 times the distance from the Earth to the Sun. Voyager 1 left the solar system in 2012 and is slightly farther away, at 13.2 billion miles from the Sun.

The Jet Propulsion Laboratory at the National Aeronautics and Space Administration (NASA) reported on October 5 that the Voyager 2 probe has been detecting a roughly 5 percent increase in cosmic rays in the last two months — an important sign that it's nearing the edge of the Sun's influence, where our star's vast magnetic field no longer blocks oncoming rays from outer space. Beyond that barrier, called the heliopause, lies open space.

"We're seeing a change in the environment around Voyager 2, there's no doubt about that," Voyager Project Scientist Ed Stone told the JPL. "We're going to learn a lot in the coming months, but we still don't know when we'll reach the heliopause. We're not there yet — that's one thing I can say with confidence."

This graphic shows the position of the Voyager 1 and Voyager 2 probes relative to the heliosphere, a protective bubble created by the sun that extends well past the orbit of Pluto. Voyager 1 crossed the heliopause, or the edge of the heliosphere, in 2012. … pic.twitter.com/M8QQuTe4Xt

​In May 2012, Voyager 1 experienced what Voyager 2 is seeing now, and it passed through the heliopauce about three months afterward. However, NASA scientists caution that Voyager 2's timeline may be a bit different, since it's not passing the same way its sister probe did.

The two probes' primary missions were to photograph Jupiter and Saturn up-close for the first time. After that, though, their paths split: Voyager 1 was sent on a special mission to photograph Saturn's largest moon, Titan, which, with its thick atmosphere and large size, scientists consider "one of the most Earth-like worlds we have found to date," Space.com quoted NASA as saying.

Voyager 1 then shot out of the solar system at an oblique angle, away from the solar system's disk, which is how it left the system first. Voyager 2, on the other hand, continued onward to the outer planets, photographing Uranus and Neptune in significant detail for the first time.

After that, the two probes began the Voyager Interstellar Mission, which has provided NASA scientists with the first measurements of the vast outer regions of the solar system beyond the eight planets, and now interstellar space.

However, the two spacecrafts' batteries are slowly failing. Last year, NASA scientists told Space.com the Voyager 1 probe may only have "two to three years" left before its systems no longer receive enough charge to continue functioning, while Voyager 2 is estimated to continue sending back data until around 2025 or so.

000000
Popular comments
NASA does it again. The importance of the Voyagers and the people involved is highlighted in Tianhou Queen of Heaven by Pyotr Clinton found on www.interouts.co.uk or Smashwords. The xtensive additions to our knowledge base are unparralelled.