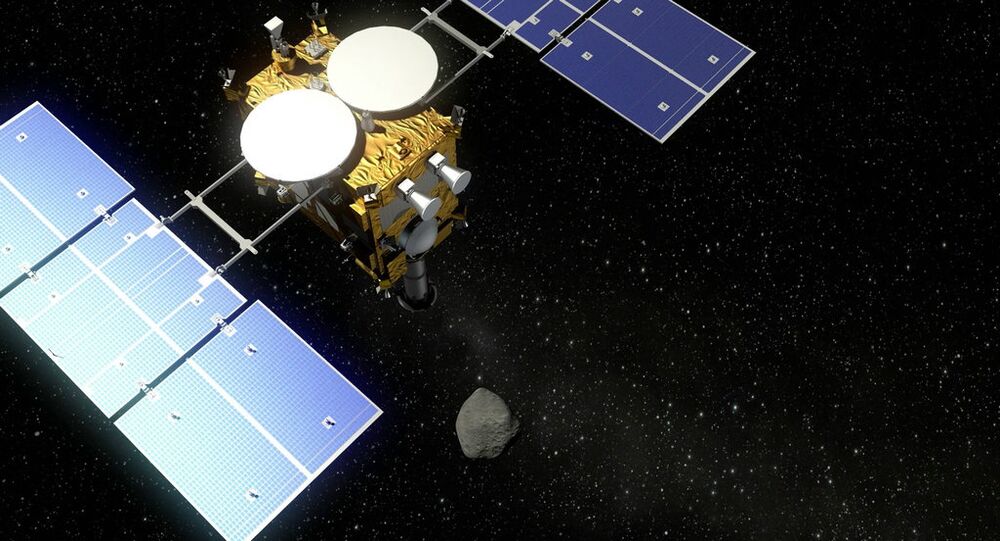 For only the second time in history, a human-made spacecraft is believed to have successfully landed on an asteroid.

Japan's Hayabusa 2 probe launched in December 2014, arriving in orbit around the asteroid 162173 Ryugu this past June. Friday, the first of two small "rovers" — MINERVA-II 1A — slowly descended from the Hayabusa 2 mothership. MINERVA-II 1B will deploy sometime early next year.

​Just as it was about to touch down on the space rock, the asteroid's rotation took the craft out of view of Japan Aerospace Exploration Agency (JAXA) scientists in Chofu. They'll have to wait until Saturday morning to find out what happened.

"This is probably due to the rotation to Ryugu, and MINERVA-II1 is now on the far side of the asteroid," JAXA officials tweeted. "We are currently working to confirm if there are images capturing the MINERVA-II1 landing."

If their landings are successful, the two "rovers" will explore Ryugu's surface with a variety of scientific gear, including temperature and optical sensors and seven different cameras, Space.com noted.

Despite their name, the MINERVA [Micro Nano Experimental Robot Vehicle for Asteroid] rovers, which have a mass of only one kilogram and measure seven inches wide by 2.8 inches tall, won't roll across the asteroid's surface: they'll hop.

"Gravity on the surface of Ryugu is very weak, so a rover propelled by normal wheels or crawlers would float upwards as soon as it started to move," according to JAXA's mission page. "Therefore, this hopping mechanism was adopted for moving across the surface of such small celestial bodies. The rover is expected to remain in the air for up to 15 minutes after a single hop before landing, and to move up to 15 m [50 feet] horizontally."

What's more, computers on the rovers will decide themselves where to go next, meaning they won't have to wait out the timely delays in interstellar communication.

The mothership in orbit above the asteroid is a lander, too. Before all is said and done, it, too, will crash into Ryugu, plummeting down to the asteroid in 2019 to grab samples of subsurface material after impact. The capsule containing the sample will hopefully return to Earth for analysis in late 2020.

​The Hayabusa 2 mission altogether costs $150 million and has been undertaken with the German Aerospace Center and French space agency CNES.

Why spend all that money to go after dust on Ryugu? Well, for one, the asteroid is estimated to have as much as $80 billion worth of nickel and iron on it, and space mining is the next big thing, Sputnik has previously reported.

But also, there's a not-insignificant threat that the kilometer-wide Ryugu might hit Earth one day, according to NASA. Plus, the dust being collected from its surface is pristine, dating back to the earliest days of the solar system. That's invaluable for astronomers and astrophysicists who want to learn more about our system's formation 4.6 billion years ago.