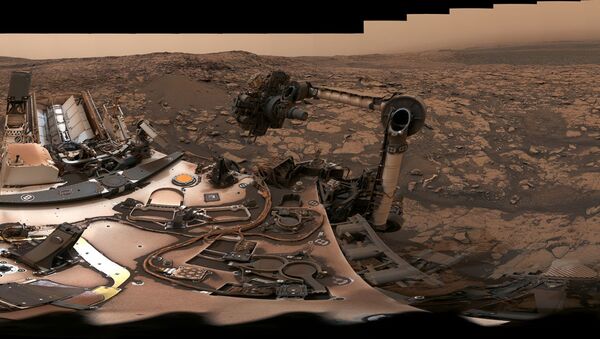 NASA’s Curiosity rover on Mars captured a 360-degree photo of its dusty surroundings last month, and the space agency has posted an interactive video of the panoramic for you to mouse around the Red Planet on.

The National Aeronautics and Space Administration (NASA), the United States' space agency, reported Thursday that the image had been snapped on August 9 and beamed back to Earth from the photo's location on Vera Rubin Ridge.

The ridge, rich in iron, sits on Aeolis Mons, an 18,000-foot-high peak Curiosity has been exploring since 2014. The SUV-sized rover has been surveying the fourth planet since 2012. In fact, September 6 was its 2,222nd day on Mars.

The ridge is named after Vera Cooper Rubin, a pioneering American astronomer who provided one of the key pieces of evidence for the existence of dark matter: the discrepancy between the predicted angular motion of galaxies and their observed motion.

Surrounding the rover are rocks and dust, dyed orange by oxidized iron, which gives the planet its nickname. In the foreground is a rock the rover had recently drilled into to collect samples, NASA noted in the press release Thursday.

The space agency noted that this rare image of the rover itself shows a thin layer of dust on top, likely the result of the planet-wide maelstrom that swirled earlier this year, obscuring the sun enough that in mid-June, the rover's smaller cousin Opportunity ran out of battery power due to lack of solar rays for its panels to collect.

The two rovers have been exploring the Vera Rubin Ridge's hematite, a curious mineral form of ferric oxide that typically forms in the presence of water, Space Ref reported in 2017, when Curiosity arrived at the ridge. Scientists hope studying the hematite rocks will give them a better understanding of Martian history, and if liquid water flowed enough on the planet to have helped form the rocks or if they were generated by some other process.