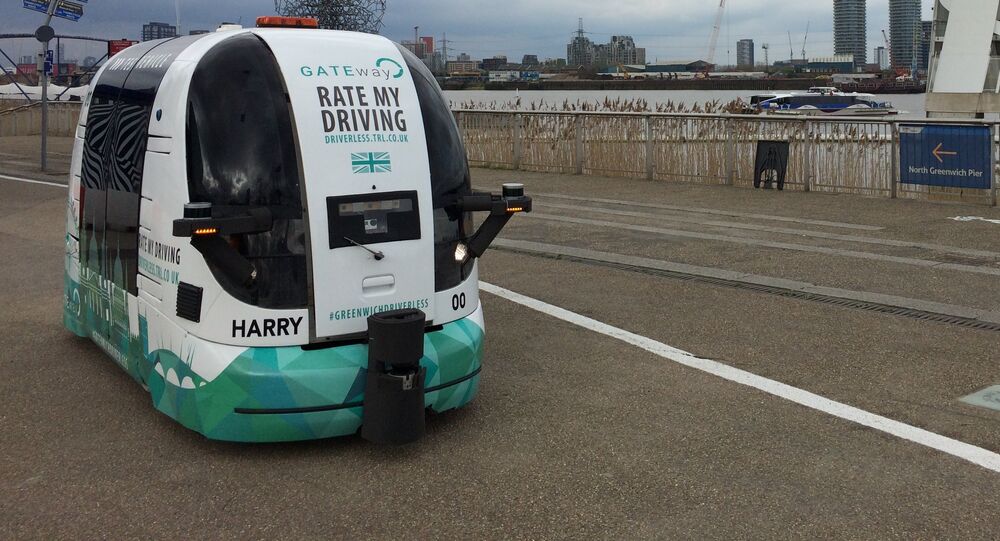 Forget the bus and the tube, London has a new mode of public transport - the capital is about to experience a driverless shuttlebus, which hits the streets Wednesday, April 5.

© Photo : Youtube/Sputnik
A Quick Look Into the Future: Driverless Buses
The UK public will get the first extended trial of the driverless shuttlebus over the next three weeks, the trial which is called "Project Gateway," will allow around 100 people to travel in a prototype shuttle on a route in Greenwich, London.

The shuttlebus, which was manufactured by Westfield Sportscars and Heathrow enterprises, has been named Harry. Oxbotica, a company which specializes in developing the next generation of autonomous vehicles, worked on the autonomous software.

It falls in to the company's fleet management system, and is run from a cloud-based system that will schedule and co-ordinate the autonomous vehicles. This system will enable smartphone booking, route optimization and data exchange between the vehicles without human intervention.

​The shuttlebus are autonomous and can be operated with ease, the bus operator can view information about the shuttle, whether it is in motion or stationary. The operator can also look at the amount of battery remaining and the temperature of key components. All of this can be seen from the iPad that's running Caesium. An operator can cancel autonomy at the touch of a button as well as request maintenance.

Chief Executive of Oxbotica, Dr. Graeme Smith, said that this is a unique experience and those who are lucky to have a go on the driverless shuttlebus are in for a surprise.

​"We hope to gain acceptance from members of the public for vehicles sharing this kind of space with them. We are also looking at how people in the vehicle respond when being transported from A to B," Dr. Smith said in a recent interview.

Autonomous cars are considered to be the future of automobiles in spite of numerous concerns about their safety. According to some experts, driverless transport may solve the issue of traffic jams, accidents and provide people with additional time, currently being spent driving.

The sun sets on another great day of autonomy in Greenwich with Harry, the test driverless GATEway shuttle. 👌 #driverless #greenwich #ai pic.twitter.com/suaLdmg2C0

​At the CeBIT 5-day event in Hanover, Germany researchers presented a driverless bus, being tested in Switzerland and France for nine months.

The driverless shuttlebus can see up to 100m (328ft) ahead and comes to a steady stop, if it detects something in its path — although it can also do an emergency brake, if required.

"It's been designed to be safe and fail-safe specifically in a pedestrianized environment," Dr. Smith said.

Officials behind the Gateway Project believe the shuttles could improve transport links in Greenwich. They say paying passengers could begin using the system by 2019 on a trial basis and that it could eventually be rolled out elsewhere.

Industry Minister Nick Hurd said that this is the future of transport in London and the current trial is a historic one.

"The UK has a history of innovation in the auto sector and this type of technology has the potential to save lives as well as offer freedom to the elderly or those with mobility impairments," Mr. Hurd said in a recent interview.

Oxbotica recently allowed journalists to trial their driverless cars in Milton Keynes, UK, this was the first of many trials that the company hope will take place over the next 12 months.

A Quick Look Into the Future: Driverless Buses