Virgin Galactic, whose aim is to take tourists to the edge of space, 62 miles above the Earth, has conducted a successful trial glide flight of a new spaceship, the company said December 3.

SpaceShipTwo, dubbed VSS Unity, took off with carrier airplane WhiteKnightTwo VMS Eve from the Mojave Air and Space Port in California. VSS Unity separated from the mothership and glided back to land on a runway in Mojave 10 minutes later.

"VSS Unity has landed. Vehicle and crew are back safe and sound after a successful first glide test flight," Virgin Galactic tweeted at #SpaceShipTwo.

The success will be a springboard for more flight tests before the spacecraft's hybrid rocket can be launched. The company said it would not begin to operate space flights until their safety is guaranteed.

Last month, the company postponed a similar test flight due to strong winds. In October 2014, its first vehicle, the VSS Enterprise, broke apart during a test flight killing, a co-pilot and injuring a pilot. Human error was said to be the cause of the failure. 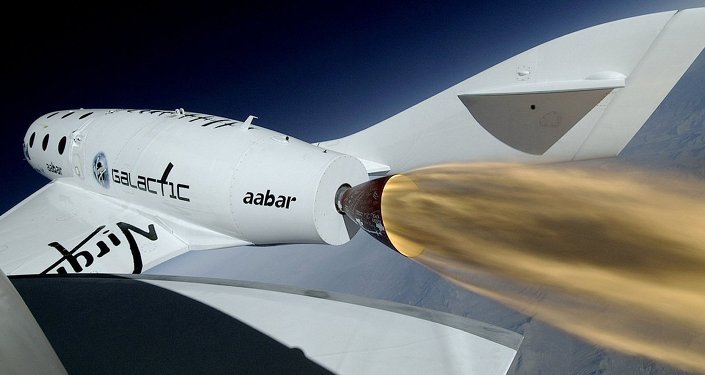 © Photo : Rex Features
After Deadly Crash, Virgin Galactic Gets License to Fly Its Spaceplane Once More
The new spaceship can be carried up to high altitudes by its carrier craft, VMS Eve. After its release, it is intended to ignite a rocket motor and propel itself into space.

It is designed to carry two pilots and up to six space tourists, taking them on roundtrip journeys to suborbital space. It will not reach orbit but will give passengers an opportunity to view the Earth from space, exposing them to several minutes of weightless.

The name VSS Unity was given by British scientist Stephen Hawking, who said he would like to experience the flight. The ticket price per seat is $250,000.