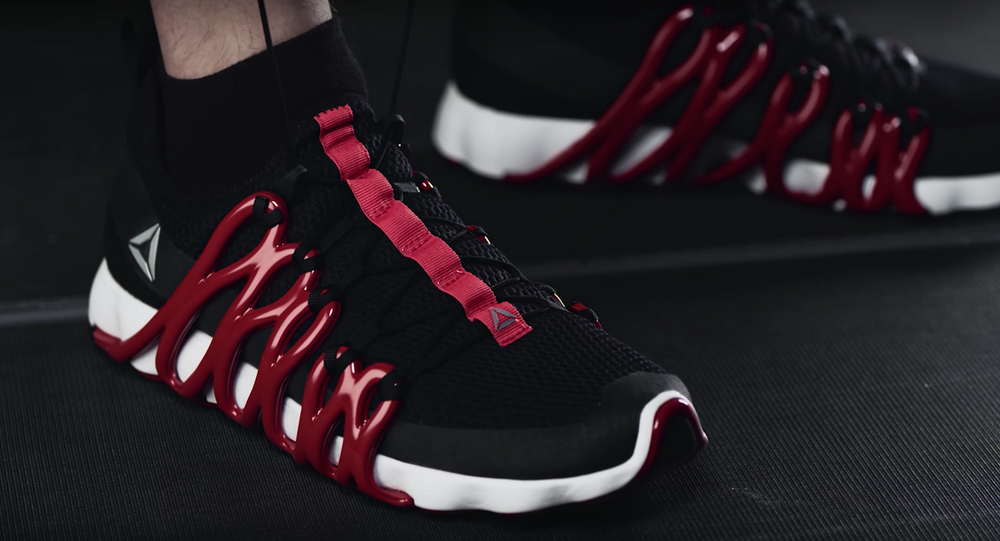 ‘Liquid Speed’: Reebok Aims to Bring High-Tech Shoe Manufacture Back to US

The advent of wide-scale 3D printing may have a huge impact on the geography of manufacturing, and it may start with shoes. Reebok has recently made known its plans to open a new, cutting-edge "Liquid Factory" early next year in Rhode Island.

According to Reebok, their innovative Liquid Factory process combines software and robotics to “draw” shoes. It uses a 3D printing technique in which robots pipe the company’s proprietary liquid material in three-dimensional layers onto a flat surface. This flexible lattice-work is then wrapped around the sole of a show from top to bottom, bending as the wearer flexes his or her foot.

All this is done without the use of traditional, expensive, wasteful shoe molds – which are these days made in China or other East Asian factories, Fortune magazine pointed out in a story on the new shoe.

This change is remarkable, an article by 3ders points out. Footwear production has been steadily outsourced to East Asia for decades. Now, with Adidas announcing late this summer that it would be starting production in the US again and Reebok hot on their heels, some manufacturing jobs may be returning to America – and all without the Trans-Pacific Partnership Nike said would be needed to allow it to create new jobs in the US.

"Footwear manufacturing hasn't dramatically changed over the last 30 years," McInnis, a former NASA engineer, told Popular Mechanics. "Every shoe, from every brand, is created using molds — an expensive, time-consuming process. With Liquid Factory, we wanted to fundamentally change the way that shoes are made, creating a new method to manufacture shoes without molds. This opens up brand new possibilities both for what we can create, and the speed with which we can create it."

The new techniques go hand in hand with efforts to court the youth market. "Part of what we're after is the millennial consumer and the Generation Z consumer," McInnis told the Boston Business Journal. Instead of mass-producing shoes in the millions, Reebok will make them in the hundreds, customized and unique.

"It's sort of fast fading away," he said of armies of shoes made by armies of low-wage workers. "It's becoming small batch manufacturing."

And the new Reebok Liquids shoes the factory will be making? They're pretty cool. Reebok describes them as an energy return-focused running shoe: the 3D printing (or drawing) technique that connects the lacing and the outsole is intended to provide more feedback for the foot. McInnis told Popular Mechanics that what the company created is the "first ever energy-return outsole," which he says dramatically outperforms traditional rubber outsoles.

"The all new Liquid Factory process is also used to create a unique fit system that stretches and molds around the foot, providing a three-dimensional fit," he said.

They certainly look new and different, with a smooth webbing that looks like gel wrapped up and around the sides of the shoe. Popular Mechanics says, thanks to Reebok’s Future division, the company has "quietly created the most exciting advancement in sneaker technology this year. This is why you've got to stay paying attention." Designed and assembled in the US, the shoes are also a totally made-in-America product.

The sneakers are on sale in a limited run of a few hundred for $189.50, it is reported, on Reebok’s website. It remains to be seen whether America is buying.