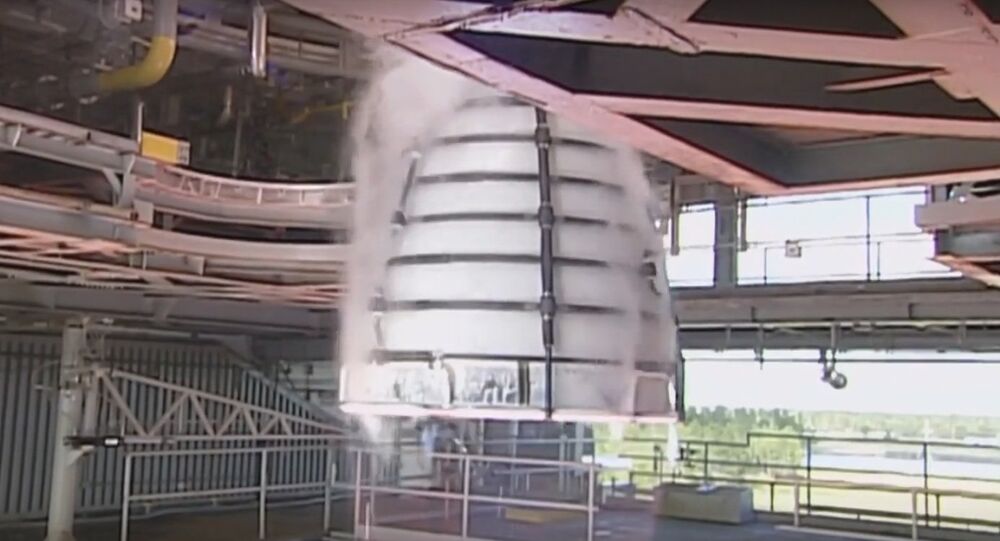 The United States’ National Aeronautics and Space Administration has released video of a successful test firing of an upgraded version of the RS-25 rocket engine the agency will use to hurl its Space Launch System (SLS), a rocket the size of the Statue of Liberty, to the Red Planet.

© NASA . Hubble Heritage Team
NASA Scientist Claims Giant UFOs are ‘Proliferating’ in Saturn’s Rings
NASA engineers intended to show that an upgraded version of the thirty-year-old space-shuttle engine design can handle extreme temperatures and high-pressure conditions. The nine-minute video of the experiment, held at NASA’s Stennis Space Center in Mississippi on Thursday, shows that it can.

The test also verified the serviceability of new hardware used to control engines and provide communication between the rocket and the engine, NASA said in a description of the video.

This was the third successful experiment of the RS-25 platform for NASA in recent months. The agency plans an additional three tests before fitting engines onto the SLS rocket.

The 130-foot-tall SLS will be the most powerful launch vehicle ever created, NASA has claimed. The rocket will be able to carry almost 130 tons of cargo into space, at least twice that of former space vehicles. NASA aims to use the SLS with the Orion spacecraft to send four-man missions to Mars.

© NASA .
Osiris-Rex: NASA’s Doomsday-Hunting Spacecraft to Lift Off in September
“This will be a unique rocket,” Dawn Stanley, an SLS systems engineer was cited by BBC as saying. “It’s going to get us back to the Moon and beyond the Moon to asteroids and Mars, further than we’ve ever gone before.”

The RS-25 engines were enhanced for SLS missions and will work concurrently with two five-segment solid-fuel boosters.

The 17-story boosters will provide a combined 3.6 million pounds of thrust by burning five tons of fuel per second.

"It's going to have to throw up all this hardware into low Earth orbit so we can then take it to the Moon and beyond, all the way to Mars,” space shuttle astronaut Rick Mastracchio said.

© NASA . JPL-Caltech
NASA Announces $1Mln Competition to Create Robots for Mars
Stanley explained that the launcher was designed so it could “meet those many missions that our government has,” whether it be a mission to Mars or an asteroid.

Before sending humans aboard Orion and SLS into deep space, NASA will conduct an unmanned test flight in September 2018.