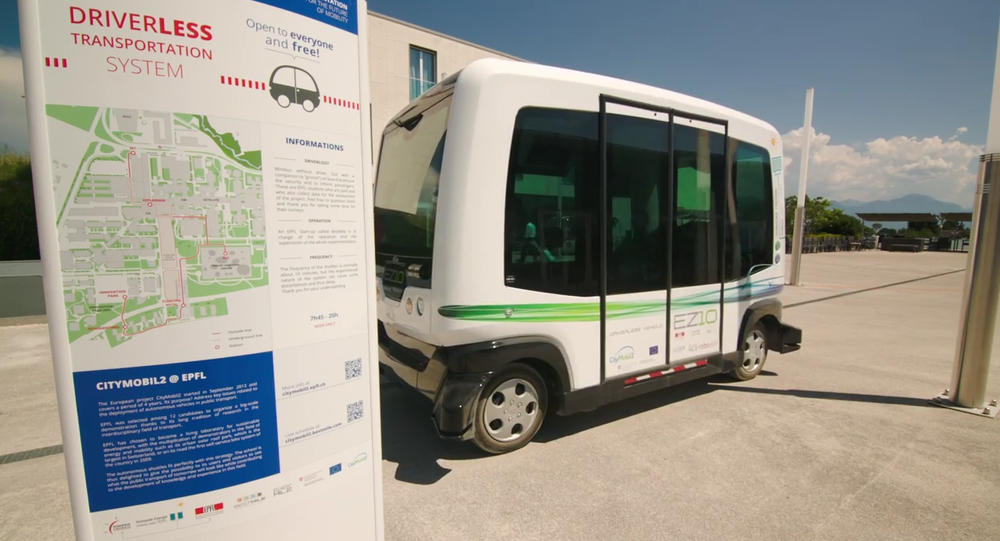 Helsinki residents stood with their mouths agape at the sight of driverless buses testing routes in the Finnish capital's Hernesaari district. The groundbreaking trials were made possible by the fact that Finnish legislation does not require vehicles to have a driver and will continue through mid-September.

© AFP 2020 / OLIVIER MORIN
A Kind of Magic: Brits to Test Volvo's New Self-Driving Car
Automatic buses that took to the streets of Helsinki in a brave pilot project are among the first in the world. Whereas similar initiatives across parts of Europe were met with bureaucratic snags, Finnish laws do not have anything against driverless vehicles, which is why officials had no problems negotiating a green light from the Finnish Transport Safety Agency (Trafi).

Whereas the pilot project currently involves only Easymile EZ-10 electric mini-buses, capable of carrying only 12 passengers, larger robotic buses could be used in addition to existing public transportation options in the future, once the initiative proves successful.

​Despite the fact that Helsinki's initiative already received a lot of praise for creativity and resourcefulness, it was not the first Finnish city to test-drive a driverless bus. Last year, neighboring Vantaa proudly wheeled out similar vehicles. In Vantaa, however, robotic buses, which became a highlight of the popular housing fair, only operated on routes shut off from other traffic.

​By contrast, the test milieu in Helsinki's Hernesaari is considerably more challenging, since the traffic in the metropolitan area is in a constant flux. Additionally, speed demons and motorcyclists, which are commonly believed to be prone to road accidents, may find it hard to keep presence of mind when navigating behind the slowcoach robotic buses which have an average speed of only ten kilometers per hour, which is rather sluggish even by the unhurried Finns' standards. It must be added to their credit, though, that the driverless buses have a maximum speed of 40 kilometers per hour.

The current ambition is to supplement ‘conventional' buses with human drivers behind the wheel, rather than replace them. The most realistic option is to use automated buses as a feeder for high-volume bus and metro traffic.

The Dutch hold first successful test of a self-driving bus on a public roadhttps://t.co/oS17eDvpW5 #Transportation pic.twitter.com/vYddblZ6HL

​Whereas self-driving buses are still a rare sight, Finland was not the first one to set them into city environment. Earlier this year, large-scale self-driving Mercedes buses were introduced in Dutch traffic, whereas smaller automated shuttles hit the quiet streets of Switzerland's Sion.

Innovative self-driving buses are being tested in #Switzerland, in old town Sion. Via @qz https://t.co/t0TXepOvkJ pic.twitter.com/P9b43tfJFd

​In addition to self-driving buses, the future has already arrived for automated metro lines, which at present are being operated in Copenhagen, Barcelona, Turin, Milan, London, Lyon and Budapest, to name a few.