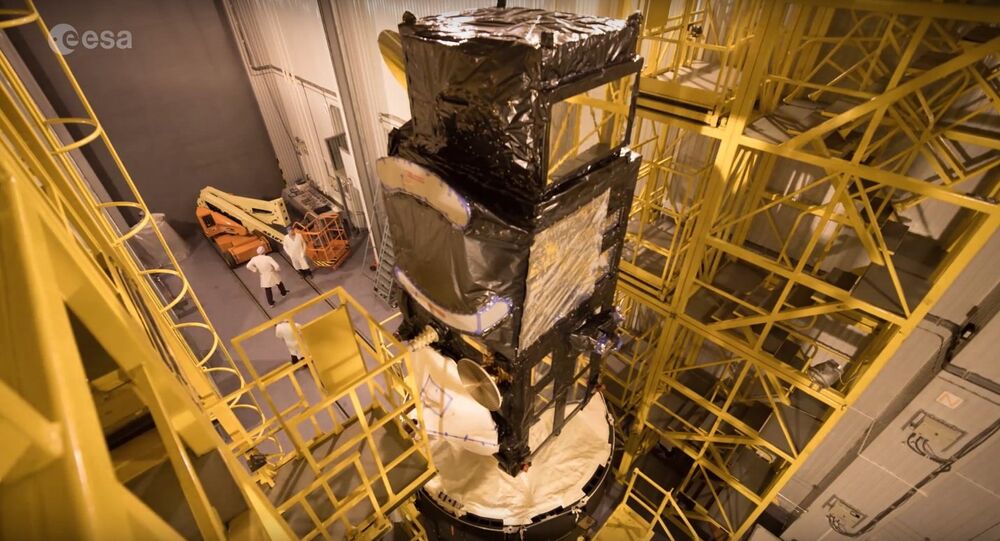 In a time-lapse video, the European Space Agency reveals the details of how the Sentinel-3A satellite was prepared for its journey into space.

© Photo : Youtube/Russian RT
Russia Launches Rokot Carrier Rocket With European Satellite
A time-lapse video clip has been posted on the European Space Agency (ESA)'s website so that viewers can observe the details of how the Sentinel-3A satellite was prepared for launch from Russia's Plesetsk Cosmodrome.

The video includes footage of its transportation to a launch pad and lift-off; the painstaking process of making the 1.25 ton satellite ready for orbit has been compressed into a clip which lasts just four minutes and 34 seconds.

On February 16, Europe's Sentinel-3A Earth observation satellite was successfully placed into low Earth orbit aboard the Russian Rockot launch vehicle which took off from the Plesetsk Cosmodrome in Russia's Arkhangelsk Region near the Arctic Circle.

The Sentinel-3A has a multi-instrument payload to monitor ocean wave height, sea and land temperature, as well as sea-ice area and thickness, something that will add significantly to weather forecasting.

The first photo from Europe's Sentinel-3A Satellite is of dawn over Svalbard in Norway. Gorgeous! pic.twitter.com/pn7mbnWDTH

The satellite was designed and constructed by a consortium of about 100 companies under the leadership of the international group Thales Alenia Space. It operates more than 800 kilometers above the Earth in a sun-synchronous orbit.