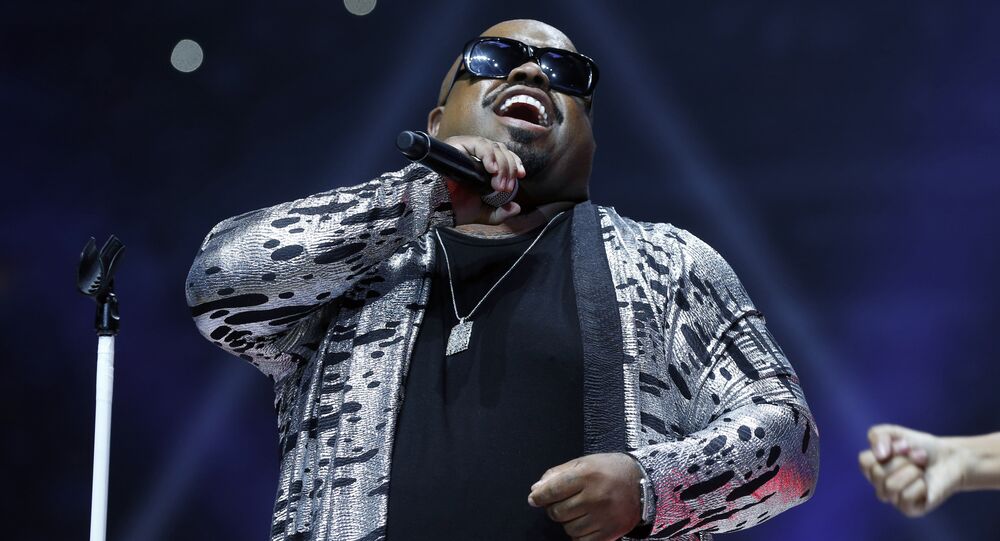 Pirate Bay co-founder Peter Sunde has already "stolen" over $120 million from the music industry with a sinister new tool called the "Kopimashin," which he talks about in an exclusive interview to Sputnik.

Singer CeeLo Green may be driven to bankruptcy and forced to sell off most of his belongings thanks to a new tool invented by Pirate Bay's co-founder, which makes endless copies of Gnarls Barkley song "Crazy."

The device makes one hundred copies of the song every minute without paying any royalties to Atlantic Records, owned by Warner Music Group. WMG made $2.87 billion in revenue in 2013, but the new device threatens to generate major losses for billionaire owner Leonard Blavatnik.

Well, not really, but it would be if records companies' estimates of losses from piracy were accurate, according to Sunde.

© AP Photo / Richard Robinson
Questions Over US Jurisdiction as NZ Paves Way for Kim Dotcom Extradition
Sunde added that he is increasingly concerned with countries around the world increasing government control of the Internet. In his view, New Zealand's government is not helping Kim Dotcom, the founder of Megaupload file-sharing website, who faces charges of costing the music industry $500 million through the website.

New Zealand police raided Dotcom's home in 2012 and put him in custody, intending to extradite him to the United States, which he has been fighting since then. A court in New Zealand decided to extradite him on December 23, although Dotcom is appealing the ruling.

"I'm pretty sure that in the end, the United States would win. And the problem is that we're not actually trying to get their influence over the world to be minimized. I don't think anyone agrees with having a country like the United States deciding over the rest of the countries of the world, it's not really democratic," Sunde said.

Sunde added that the current trend of centralizing the Internet toward the United States could lead to many more people like Kim Dotcom. According to Sunde, the trend could become more extreme, with globalized monopolization of internet services.

However, other countries enabling the US are also to blame, according to Sunde. The countries where he works, Sweden, Finland and Norway, also have similar laws and practices on monitoring traffic and breaking into encryption on private communication.

Other than monitoring all traffic that goes across its border, Sweden also forces companies to give out their encryption keys and sends the intercepted information to unidentified "partners," Sunde said. According to Sunde, this is beginning to spread a dangerous precedent that could spread to all countries around the world.

Medvedev: Internet Regulation Should Be Under Int’l Organizations' Auspices