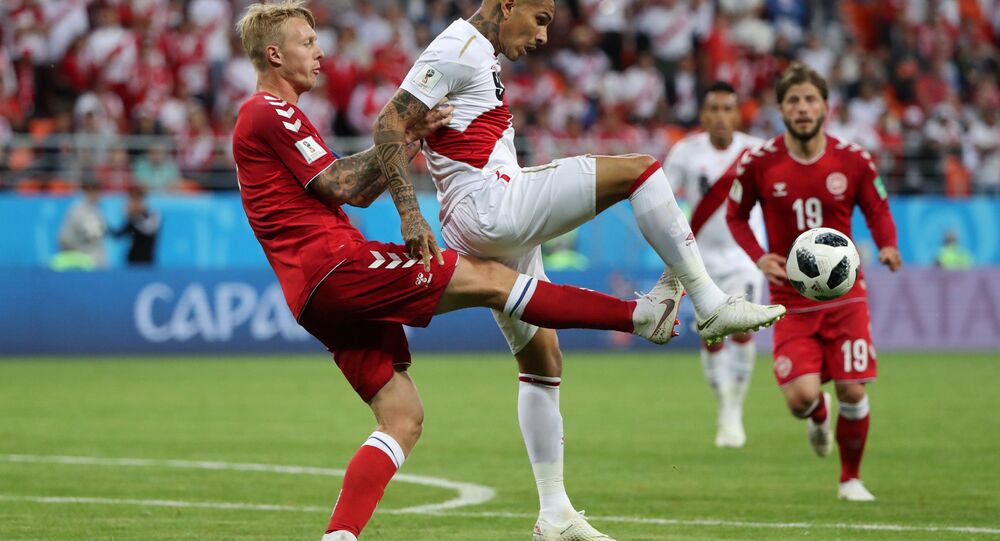 MOSCOW (Sputnik) - Denmark defeated Peru, who were making their first tournament appearance in 32 years, in teams' first match at FIFA World Cup at the Mordovia Arena in Saransk on Saturday.

Peru had the chance to open the scoring in the 45th minute when referee Bakary Gassama pointed to the penalty spot after consulting with the Video Assistant Referee (VAR). However, Peru's Christian Cueva failed to convert the spot kick as his shot went high over the crossbar.

The deadlock was finally broken in the 60th minute when Denmark forward Yussuf Poulsen beat the goalkeeper one-on-one. He was named Man of the Match.

© REUTERS / Murad Sezer
FIFA Twitter Account Shamed for Mixing Up Diego Costa With Brazil Star Douglas
Denmark midfielder William Kvist was injured during the game and left the pitch on a stretcher. Kvist was replaced by Lasse Schoene in the 35th minute.

As many as 40,502 people attended the World Cup group stage game between Peru and Denmark in Saransk, FIFA said on Saturday.

Both teams are playing in Group C alongside France and Australia. Les Blues beat the Socceroos 2-1 earlier in the day.

Denmark and Peru will play their next matches against Australia and France respectively both on Thursday.

The 2018 FIFA World Cup kicked off on Thursday and will continue until July 15, with the matches set to be played in 11 cities across Russia.