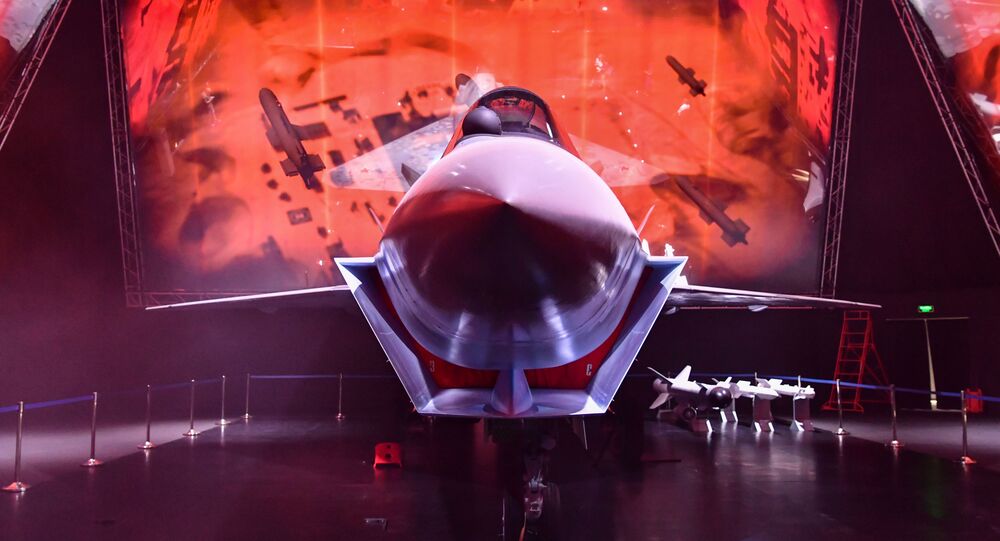 The Checkmate, which might operate under the name Su-75 in Russia, has been developed by defence and technology giant Rostec and the United Aircraft Corporation in record time and will be produced in three versions: a one-seater, two-seater, and unmanned aircraft.

Judging from the Checkmate's specifications and performance data, the fighter will accelerate to Mach 1.8 (2,222.6 km/h) and carry a maximum payload of 7,400 kilogrammes with an estimated practical ceiling of 16.5 kilometres and flight range of 2,800 kilometres (without outboard fuel tanks).

According to General Director of the United Aircraft Corporation Yuri Slyusar, the fighter's multifunctional platform can be adapted to the various needs of future buyers due to its open-architecture. Furthermore, it is combines "low operating costs and broad combat capabilities".

The Checkmate is designed to attack up to six targets simultaneously on land, air or sea, even under conditions of strong electronic interference. At the same time, the stealth jet's price tag will be between $25-30 million (21-25 million euros), which is substantially lower than that of its major competitors, France's Rafale, Sweden's Gripen NG, or America's fifth-generation F-35 Lightning II aircraft.

© REUTERS / EDDIE KEOGH
A pair of RAF F-35B Lightning fighter jets flies over The English Channel during the "Point Blank" exercise after taking off from RAF Mildenhall, Britain, November 27, 2018

Yet another important advantage of the new Russian fighter is its low flight operating cost. According to Slyusar, it will be seven times lower than that of the F-35 ($33,000 per flight hour) and comparable to that of the Gripen NG (between $4,500 and $8,000 per flight hour). The Checkmate, however, significantly surpasses the latter in terms of combat capabilities, according to Slyusar.

As stated in the presentation of the aircraft, the portfolio of orders for the new light tactical fighter now stands at 300 units. Checkmate's maiden flight is scheduled for 2023, while the construction of several test prototypes is due to be completed in 2024-2025. A year later, Sukhoi's designers are expected to kick-start the creation of the first batch of aircraft. "Our task is for this plane to be offered en masse to customers starting in 2026", Slyusar told reporters on 20 July.

The Russian manufacturers teased international observers ahead of the Checkmate's debut, with Rostec releasing an English-language video ad on 13 July and then photos of the new fighter covered by a tarp with the question "wanna see me naked?"

​The trick worked well as the aircraft immediately prompted a lively debate in the media, with users racking their brains over the Checkmate's potential technical features.

United Aircraft Corporation released a video saying that they will unveil a new military aircraft at MAKS 2021. Presumably, this is the single-engine 5th-generation fighter from Sukhoi that was mentioned in May.https://t.co/EuwC0NVdoP pic.twitter.com/zeyJmqS8gn

​"If Russia's [plane] is single-engine, that would be a big deal", tweeted American military observer Tyler Rogoway. "Getting a modernised fighter that leverages lessons from Su-57 and some avionics etc., is likely regarded as highly important to their tactical jet export industry".

The covering is rather intriguing. From another angle, it appears that the F-22-style side inlets may actually be canards. And the inlet may be a pentagon-shaped cavity starting just under the cockpit, then conformally bending under the chines to a shallow ventral duct. https://t.co/FMH9je20g3 pic.twitter.com/h4B6lQSy3j

​Some American observers suggested that a number of nations could soon line up for the relatively inexpensive aircraft, seeing it as a substitute for Lockheed Martin's F-35.

"In fact, the leveraging of Su-57 technologies seems to be one of the cornerstones of Checkmate", The Drive presumed on 20 July. "Not only does it promise to reduce development costs, but it should, when combined with an open-architecture approach, let customers pick and choose which sensors, for example, they need on their particular LTS iteration".

What's more interesting, according to The Drive, is that the Russians are interested in developing the unmanned version of the jet. Indeed, opening the MAKS-2021 air show, President Putin specifically elaborated that UAVs, robotic systems, and artificial intelligence are the most promising sphere of the aviation industry, with Russia keeping up with the times.

Checkmate appears to be inspired by the Sukhoi Su-57 (codenamed Felon by NATO), a twin-engine stealth-capable multi-role fifth-generation fighter, developed for both anti-air and air-to-ground operations. The Su-57 boasts super-manoeuvrability, short takeoff and landing, a high level of protection, and a wide set of advanced technological features.

In March 2018, the Russian Ministry of Defence (MoD) revealed that Su-57 jets had been tested in Syria. Having noted that Su-57 crews had made over 10 sorties in Syria, the ministry reported that the mission was "carried out in order to prove the announced possibilities of the newest aircraft in a real combat environment". On 19 November, the MoD released footage of the Su-57's manoeuvres in the Syrian Arab Republic.

Meanwhile, JSC Sukhoi's designers are keeping the state-of-the-art plane up to date. The upgraded version of the Su-57 will see further improvements in aerodynamics, new engines, new construction material, next-generation onboard equipment, including the active use of artificial intelligence, the ability to operate in a network-centric atmosphere of various weapons systems, according to Sergei Smirnov, a member of the Military-Industrial Commission board, who talked to Sputnik ahead of MAKS-2021.

Photos: Meet ‘Checkmate’, Sukhoi’s Sleek New Fifth-Gen Fighter Jet for Half the Cost of an F-35