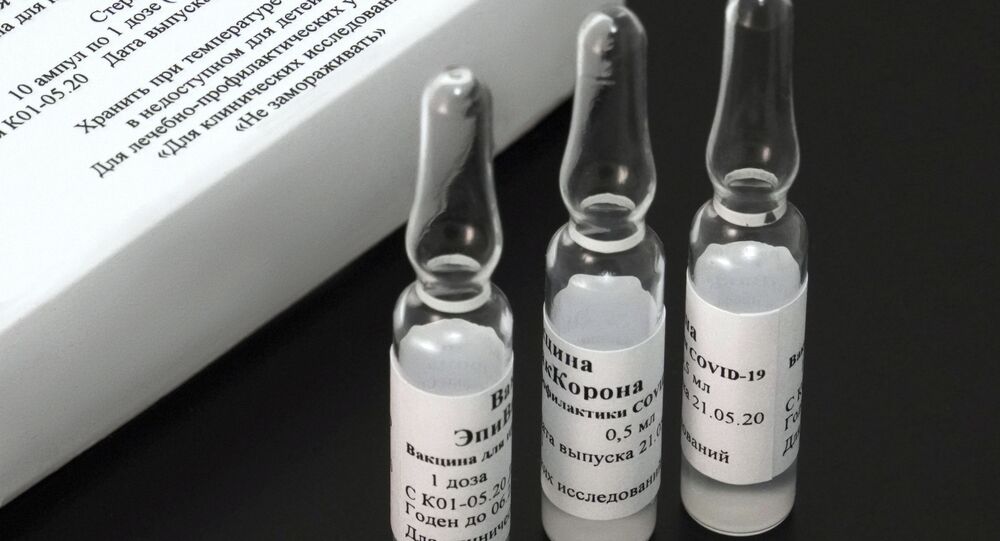 EpiVacCorona is a coronavirus jab developed by the Vector State Research Centre of Virology and Biotechnology just outside the Russian city of Novosibirsk.

The immunological efficacy of the Russia-developed coronavirus inoculation EpiVacCorona amounts to 100 percent based on the results of the first and second stages of clinical trials, according to the Federal Service for Surveillance on Consumer Rights Protection and Human Well-Being (Rospotrebnadzor).

"The overall efficacy of a vaccine is made up of its immunological and preventive efficacy", the press service said in a statement.

The EpiVacCorona inoculation was developed by the Vector Institute, a biological research centre in Koltsovo, the Novosibirsk Region, Russia. Unlike the first Russian vaccine Sputnik V, which is a vector jab based on a human adenovirus, the new vaccine is a peptide-based drug, and relies on a promising synthetic platform. It consists of artificially synthesised short fragments of viral proteins - peptides, through which the immune system learns how to recognise and then neutralise the virus.

"I must say that the vaccine is characterised by the absence of reactogenicity and a sufficiently high level of safety", Russian Deputy Prime Minister Tatyana Golikova said back in October, as Vector kicked off post-registration clinical trials in various Russian regions involving 40,000 volunteers.

President Vladimir Putin on 14 October announced that Vector's brainchild had been formally approved and registered in the country.

Russian chief public health official Anna Popova asserted that documents related to EpiVacCorona were submitted to the World Health Organisation on 8 December, "and we are awaiting the WHO's decision".

EpiVacCorona is expected to be introduced into civil circulation in January 2021, as follows from data from the vaccine registration certificate published in the state registry of medicines.