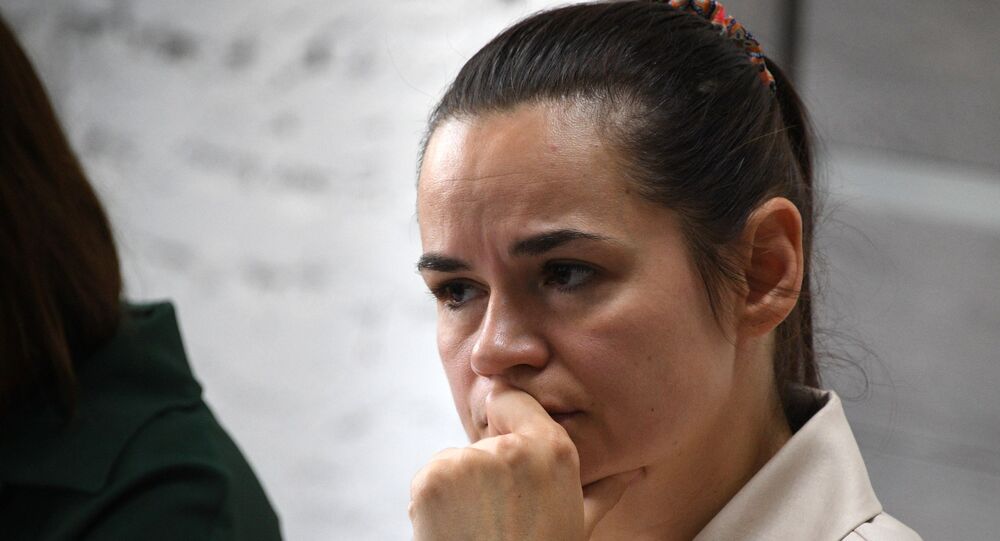 MOSCOW (Sputnik) - Belarus has put opposition politician Svetlana Tikhanovskaya on the interstate wanted list for her calls to overthrow the constitutional order, the Russian Interior Ministry told Sputnik on Friday.

"The search records of the Interstate Information Bank contain information about Tikhanovskaya, who was put on the interstate wanted list of the Belarusian Interior Ministry for committing the crime described in Part 3 of Article 361 [of the Belarusian criminal code]: 'Calls for overthrowing or changing the constitutional order of the Republic of Belarus, or committing crimes against the state'", the Russian Interior Ministry explained.

The offence is punishable by up to five years' imprisonment.

© AP Photo
Belarusian opposition supporters rally in the center of Minsk, Belarus, Sunday, Aug. 23, 2020. A vast demonstration with many thousands of protesters demanding the resignation of Belarus' authoritarian president are rallying in the capital, continuing the public dissent since the disputed presidential election.

Earlier this month, it was revealed that the former candidate for the Belarusian presidency is wanted both in her country and in Russia. The Russian Interior Ministry explained later that Moscow had not initiated any criminal proceedings against Tikhanovskaya, and she was on the wanted list only in accordance with bilateral agreements on exchanging information related to crime prevention.

Protests erupted in Belarus after presidential elections in August, in which, according to the authorities, President Alexander Lukashenko gained 80.1 percent of the vote. The Belarusian opposition, however, claimed that Tikhanovskaya, not Lukashenko, had won, citing election fraud by the authorities.