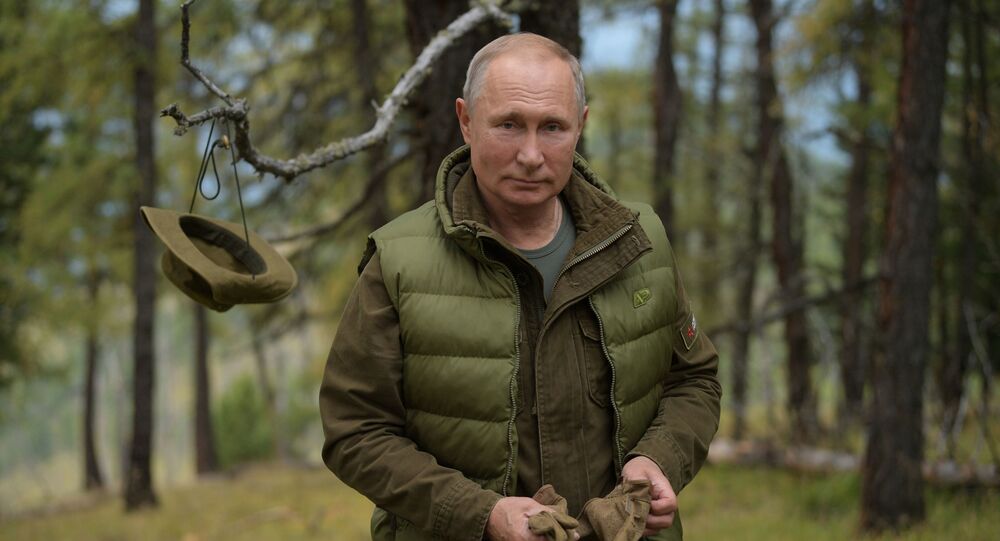 Marking birthdays when being in the public eye is certainly a tricky task but not for Russian President Vladimir Putin. The last twenty years have seen him hitting the ice, climbing mountains, and attending an APEC summit, which all came as part of Putin's birthday celebrations.

With Vladimir Putin turning 68 on Wednesday, here's a brief insight into how the Russian president has celebrated his birthdays over the past twenty years of him being in the public limelight.

On 7 October 2000, Putin, who was born in 1952 in St. Petersburg, marked his first birthday as president in the town of Pavlovsk near Russia's northern capital, where he accepted congratulations from senior officials and prominent cultural figures.

The gathering came after the US started its Operation Enduring Freedom in Afghanistan earlier on 7 October 2001, in response to the 9/11 terrorist attacks. Later that day, Putin celebrated his birthday with his family at a presidential residence in Novo-Ogaryovo outside Moscow.

The Russian president celebrated his 50th birthday in Chisinau, capital of the former Soviet republic of Moldova, where he participated in a summit of the Commonwealth of Independent States (CIS).

After the talks, the heads of the CIS countries were invited to a dinner at the Russian Embassy, in what was followed by their visiting the world-famous Cricova wine cellars.

Upon returning to Moscow on 7 October 2002, the president accepted congratulations from high-ranking Russian government and military officials.

In 2003, Putin's birthday celebrations took place in St. Petersburg, where a banquet aboard the anchored ship New Island on the Neva River was attended by senior officials as well as preeminent cultural, sports, and business figures.

The president's 52nd birthday saw a gala dinner and subsequent fireworks at the eye-catching Konstantin Palace in the suburbs of St. Petersburg, where several honorary citizens of Russia's northern capital along with highly placed officials were in attendance.

Putin turned 53 in 2005 and he again picked St. Petersburg as a venue for his birthday celebration, which included his meeting with the leaders of Kazakhstan, Kyrgyzstan, Tajikistan, and Uzbekistanas part of a summit of the Central Asian Cooperation Organisation.

A ceremonial breakfast at the Konstantin Palace was followed by Putin's talks with then-German Chancellor Gerhard Schroeder.

In 2006, the president remained committed to a tradition of marking his birthdays in St. Petersburg, where he met then-city governor Valentina Matvienko, among other officials.

Putin's 55th jubilee events were held in Moscow's Grand Kremlin Palace and attended by senior government officials and relatives of those Russian servicemen who gave their lives while on duty.

"Today we are not summing up the results; it's not a meeting and not even an award ceremony, today I am meeting with people whom I deeply respect", Putin underlined during that event.

Between 2008 and 2012, Putin served as Russian prime minister and his first birthday in this capacity was also celebrated in St. Petersburg.

He took part in the presentation of the film "Learning Judo with Vladimir Putin" at the Konstantin Palace, which was followed by Putin attending a session of the General Assembly of Interpol, held for the first time in Russia.

© Sputnik / Aleksey Nikolskyi
Prime Minister Vladimir Putin presented to journalists a tiger cub which he was given for his birthday on October 7.

One of Putin's presents even included a tiger cub that was then transported to a Russian safari park.

During his 57th birthday, Putin met with then-Russian President Dmitry Medvedev to discuss the socio-economic situation in the country. Later that day, the then-PM met a group of well-known Russian writers who presented him with their books.

The presents included writer Andrey Bitov's book with an inscription that read: "From a private to the commander, for whom I will stand to the end".

The book, titled "The Fight", pertains to the Battle of Poltava in 1709, which saw Russian Tsar Peter the Great and the nation's military defeat forces from the Swedish Empire.

Putin's 58th birthday celebrations saw him partaking in a St. Petersburg meeting about the implementation of development programmes for the country's leading universities, as well as a gathering with representatives of the Leningrad Federation of Trade Unions.

Putin spent his 59th birthday in Moscow, where he addressed a meeting about the development of Russia's defence industry.

Putin turning 60 came after he again took the helm of the country as president. On the eve of his birthday, his press secretary Dmitry Peskov said: "the president will celebrate his birthday in St. Petersburg, in a circle of family and friends". No working meetings for Putin were planned at the time, but he accepted congratulations by phone.

On 7 October of that year, the president was on the Indonesian island of Bali, where he earlier arrived to participate in an Asia-Pacific Economic Cooperation (APEC) summit. According to press secretary Dmitry Peskov, Putin's birthday was a "working" one.

Ahead of the APEC plenary session, then-Indonesian President Susilo Bambang Yudhoyono congratulated Putin by singing the song "Happy Birthday to You", while then-Japanese Prime Minister Shinzo Abe and Chinese President Xi Jinping presented Putin with sake and a cake, respectively.

"I suggested that my Chinese friends raise a glass of vodka on this occasion. They did not refuse, and we did so", Putin told reporters after the session.

For the first time in his years in top government posts, Putin took a day off on his birthday and flew to the Siberian taiga, "300-400 kilometres from the nearest settlement", according to Peskov.

Putin, for his part, said during a meeting of the Russian Council for the Development of Physical Culture and Sports on 9 October 2014 that the "day before yesterday had been a walking day" for him.

"I walked almost nine kilometres in the mountains, [and] everything still hurts", the president added.

Putin's 63rd birthday celebrations began with his meeting Defence Minister Sergei Shoigu, during which the two discussed the military operation in Syria.

© Sputnik / Aleksey Nikolskyi
October 7, 2015. Russian President Vladimir Putin takes part in the match between the team of the Night Hockey League champions and the team of the league's board members and honorary guests

At the end of the game, President of the Russian Ice Hockey Federation Vladislav Tretyak congratulated Putin on his birthday and decorated him with the medal "For loyalty to and love of hockey".

In 2016, Putin did not take part in any public events, with presidential press secretary Dmitry Peskov saying at the time that the head of state had spent his birthday together with his near and dear.

The president's 65th birthday saw him participating in a meeting with permanent members of the Russian Security Council and holding a number of telephone conversations with foreign heads of state.

The year before last, Putin celebrated his birthday with his family and friends, receiving congratulations by phone from heads of state and international organisations.

The president also watched a recording of the MMA fight between Russia's Khabib Nurmagomedov and his Irish rival Conor McGregor. A few days later, Putin met the staff of the Stavropol agricultural enterprise Rassvet, receiving apples and apple seedlings as a birthday present.

Last year, Putin again preferred to mark his 67th birthday in the circle of his close family and friends.

In the morning, the president accepted phone congratulations from the leaders of a number of CIS countries, as well as Serbian President Aleksandar Vucic, Israeli Prime Minister Benjamin Netanyahu, and President of the International Olympic Committee Thomas Bach.

On the eve of the birthday, Putin along with Defence Minister Sergei Shoigu visited the Russian Republic of Tuva, where he took a hike in the taiga and climbed mountains.

'Not Just Work': Vladimir Putin Reveals What Presidency Means to Him