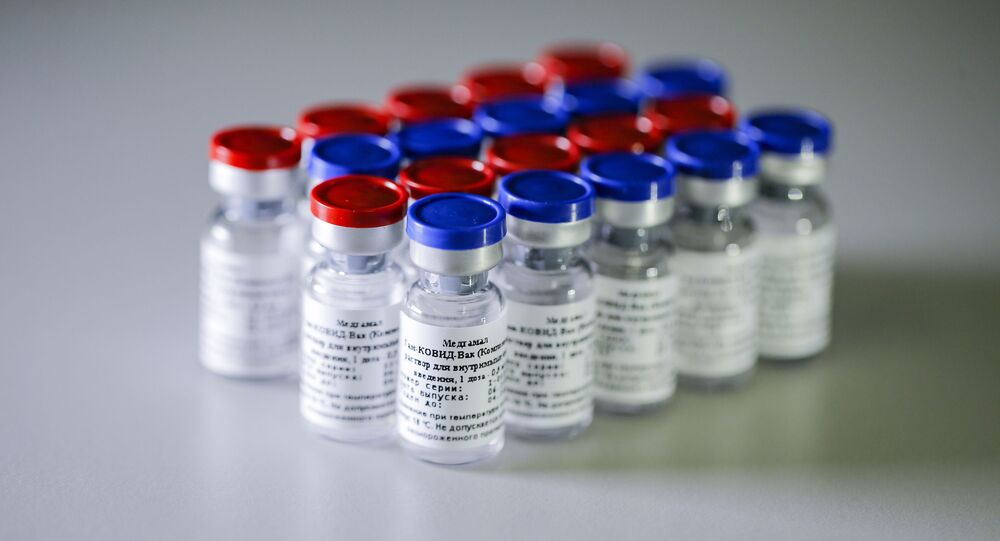 'Simple and Effective': Top Medic Explains Why Russia’s Anti-COVID Vaccine Can Be Trusted

The emergence of the first vaccine against the coronavirus infection has sparked interest across the globe, as the drug promises not only an end to COVID-19-related deaths, but also a path to restoring a country's economy.

After almost half a year of the battle against the coronavirus, a real ray of hope has appeared with the announcement of the first COVID-19 vaccine being registered in Russia. However, the news was not taken as positively as one might have expected in the Western media, which doubted the drug's safety and effectiveness - and even its existence, citing the accounts of various "experts". Many of them pointed to the lack of medical data from human trials available to the public, as well as the small size of the test groups, which amounted to 76 people, not counting the members of the Gamaleya Research Institute who worked on the vaccine and, confident in its effectiveness, voluntarily injected themselves with it.

The doubts of these experts are raising questions among medics who are actively involved in treating COVID-19 patients and have high hopes for anti-coronavirus vaccination, Sergei Tsarenko, deputy head of the anaesthesiology and resuscitation department at Moscow City Hospital 52, which has been treating COVID-19 patients, said. He points out that while doctors have found ways to effectively treat coronavirus patients, they can still only do so much in severe cases. In this sense, vaccination against COVID-19 is a safer and more reliable way to prevent deaths from the disease, the medic stresses, adding that the drug, developed by the Gamaleya Research Institute, can be trusted.

"So far, resistance to the disease can only be formed if a person catches it and recovers. But there is also a safer option - immunisation. There is an effective and safe vaccine created by specialists from the Gamaleya Institute. In the microbiological community this institute is akin to 'Mercedes' in the automotive industry", Tsarenko said.

The Sputnik V vaccine essentially consists of two components. The first is a harmless adenovirus, a "rocket carrier" that delivers the second component, a piece of the COVID-19 genome or, so to speak, an "orbital station" into a human body, Tsarenko explains, describing the process using space terminology – which gave the vaccine its unusual name. The doctor goes on to explain that a body produces an immune response to both the "carrier" and the "station", but only a short-term one – hence a second injection is needed.

"In order to make the [immunity] more permanent, the same 'orbital station' is delivered into the body three weeks later, using another 'carrier'. As a result, the body doesn't produce strong immunity to either of the adenoviruses, but forms a strong defence against the coronavirus", the doctor elaborates.

This method, also called viral vectors, was developed by the institute a long time ago and has since been tested in several vaccines, namely against Ebola and another type of coronavirus – MERS, the medic reveals. "It's as simple as all ingenious things in the world" and so far no one else has managed to achieve it, Tsarenko adds.

Talk in the media about possible complications caused by catching the actual coronavirus between the two injections, also known as antibody-dependent enhancement, only sounds horrific to people who have no expertise in the matter, the anaesthesiologist believes. He explains that the phenomenon has only been detected in dengue fever patients and is not linked to vaccinations – something that virologists are well aware of.

The real question is not whether the Sputnik V vaccine is safe and effective, but rather why it has been greeted with a negativity "campaign" in the media, Tsarenko says. Another good question is who is sponsoring the "independent experts" that are casting doubts over the Russian drug – whether it's other vaccine makers or companies producing anti-viral drugs, the doctor continues. He explains that such "undercover fuss" is embarrassing to all the doctors directly involved in treating COVID-19 patients and who dream of only one thing – that it will all end as soon as possible.

Forbidden Op-Ed: The Sputnik Vaccine as a Lifesaving Global Partnership

RDIF CEO: Russia Has Received Requests for 1 Bn Doses of COVID-19 Vaccine From Over 20 Countries