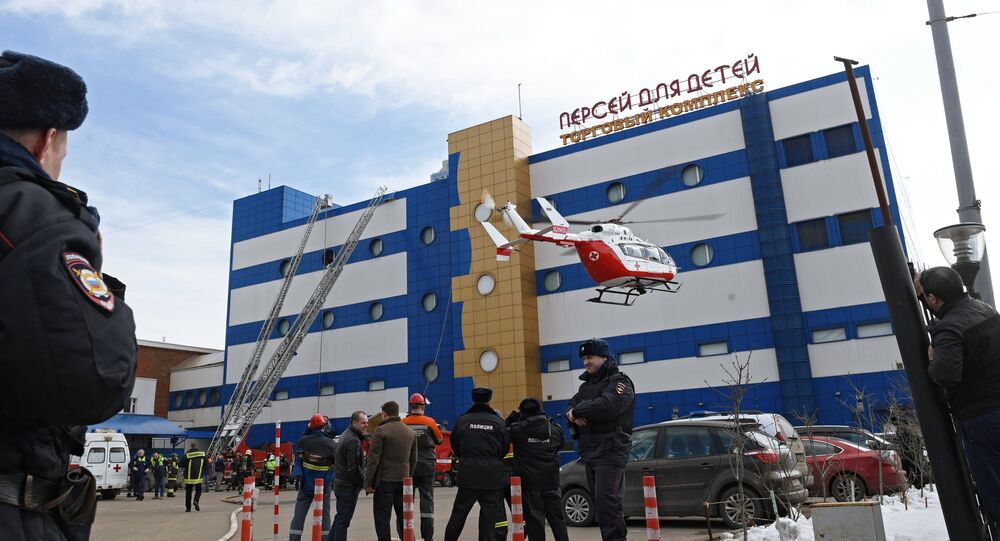 According to Moscow emergency services, two KA-32 helicopters are ready to extinguish a fire in the Persei shopping mall in eastern Moscow.

The Persei shopping mall has caught fire in Moscow's east on April 4, evacuation is underway and there are casualties, an emergency services source told Sputnik.

According to preliminary information, the fire started on the fourth floor of the building.

"The fire was given the 2nd rank of complexity, there are injured, visitors are evacuated by the rescue ladder," a source in the local emergency services told Sputnik.

The fire in shopping mall killed one employee, six firefighters were injured, according to the Russian Emergencies Ministry.

"During the investigation, a dead employee was found. According to the administration, he was confused about the direction of the evacuation exit and moved to a smoky zone," head of the Moscow's Emergency Ministry Ilya Denisov said.

The evacuation systems, smoke protection, automatic fire extinguishing and personnel have been in good working order, the Emergency Ministry added.

The Persei shopping mall in Moscow was last inspected in March; however no violations regarding today's fire have been found, according to the Emergency Ministry.

Internet users published the footage of the incident in social media.

Earlier in the day, around 700 people were evacuated from a shopping mall in Saratov after a short circuit, according to an emergency services source.

Russia is still in shock after deadly fire in Kemerovo. On March 25, a fire broke out in the Zimnyaya Vishnya ("Winter Cherry") shopping center in which 64 people died. The fire began on the top floor of the shopping mall on Sunday, when the center was packed with visitors, including many children.