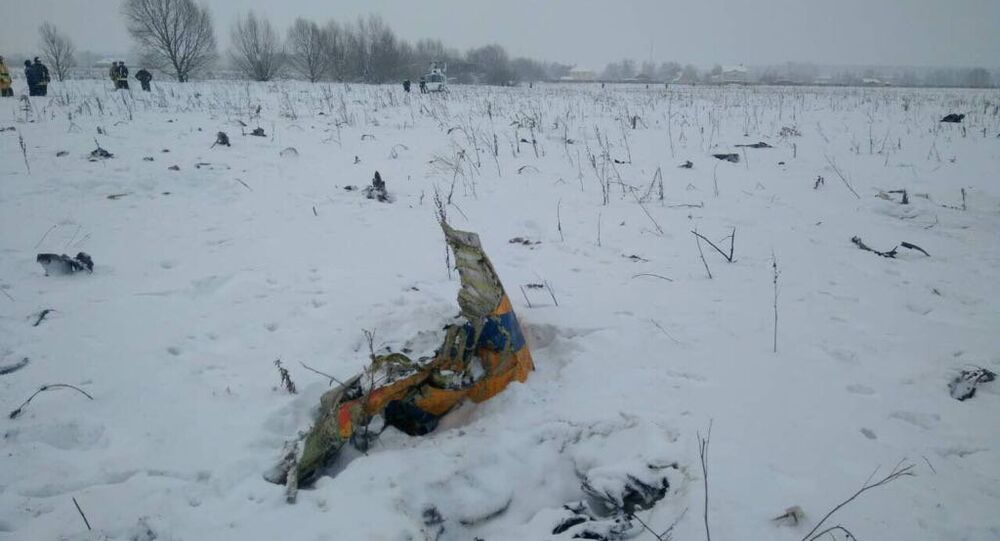 An An-148 plane flying from Moscow to Orsk in southwestern Russia crashed on Sunday, only several minutes after taking off from Domodedovo airport, claiming the lives of all 65 passengers and 6 crew members on board. The investigation into the crash is currently underway.

The Russian Interstate Aviation Committee reported that their experts have recovered the record of the last flight of the crashed An-148 plane in the retrieved flight recorder.

"Due to mechanical damages of the protected memory modules, it was necessary to carry out a complete disassembly, dismantling the solid-state memory cards. After the parametric recorder data storage was installed in the technological ground-based device and the information and power connections were restored, all the data was successfully copied from the on-board parametric recorder. There are records of 16 flights, including the one that ended in catastrophe," the committee's statement read.

According to the IAC, the experts had begun to decipher the record, adding that at the moment the work was underway to prepare the sound recorder for copying as well.

© Photo : Interstate Aviation Committee
A flight recorder belonging to the An 148 aircraft that crashed outside Moscow
The committee has also held talks with the Ukrainian "Antonov" company, which designed the plane.

The crashed An-148 plane was flying from Moscow to the city of Orsk in southwestern Russia on Sunday. A few minutes after taking off from Domodedovo airport outside the Russian capital, communications with the plane were lost. All 65 passengers and six crew members on board died in the crash.

At the present, hundreds of specialists with over 100 units of specialized equipment are deployed at the site of the deadly incident. They have already managed to find two of the plane's black boxes, which were registering parametric data.