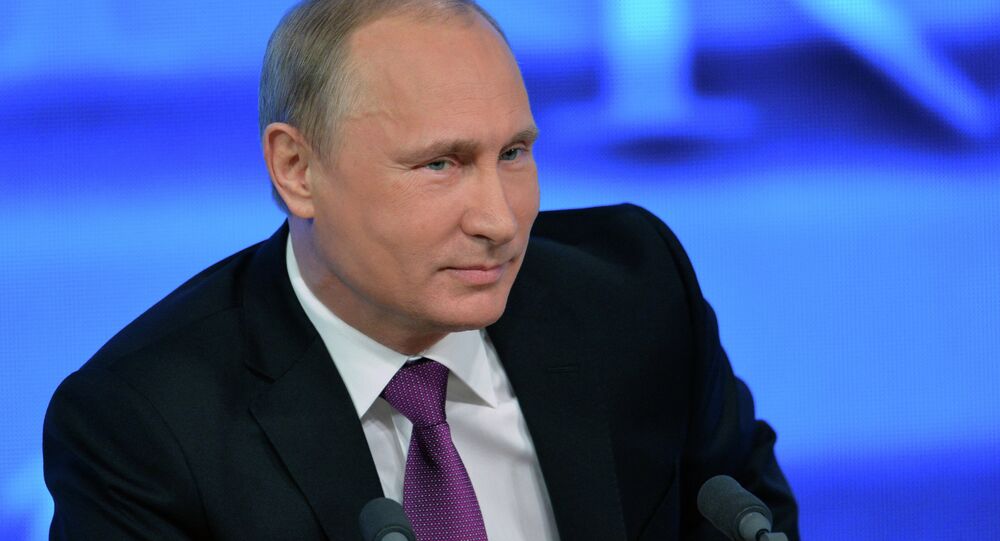 Ask Him Anything: Four Things to Know About Putin's Marathon Press Conference

On December 14, Vladimir Putin will hold his end of year press conference, an annual event garnering significant attention in Russia and around the world. Sputnik shares the four most important things you'll want to know to get a sense of the context behind the event.

Thursday's event will be Putin's thirteenth time speaking with Russian and foreign journalists in the long press conference format. The president started the tradition in 2001, after receiving a large number of requests for interviews from Russian and foreign media. Putin's answers to questions during a difficult time in Russia's history provided journalists and the public with a sense of the president's awareness of the country's problems.

© Sputnik / Alexei Druzhinin
Putin’s Press Conference May Hail Start of Election Debates in Russia - Analysts
In Russia and abroad, Putin's direct line press events have become a media extravaganza. Last year, for example, Putin spoke at length about the Russian economy, defense spending, sanctions, the dangers of a new arms race, and Russian foreign policy, including alleged meddling in the 2016 US presidential elections.

The length of the press conferences, the number of questions asked and the number of journalists present has itself become a barometer on the state of the nation, and interest toward Russia around the world.

For example, while the 2001 event lasted a modest one-and-a-half hours, with the estimated 400 journalists in attendance asking Putin 22 questions, in 2008, the outgoing president answered a record 106 questions from over 1,300 journalists over the course of four-and-a-half hours. As for the attendance record, it was set last December, when Putin spent nearly four hours answering questions from 1,437 Russian and foreign journalists.

One of the defining features of Putin's annual press conferences has been the chance it gives journalists of all stripes, countries and political persuasions to get a direct response from the president. As some Russian opposition and foreign journalists try to corner the president with hard-hitting questions about his policies, others ask him to comment on more light-hearted issues, such as his love life, the 2012 Mayan prediction about the end of the world, or whether he'd like to clone himself.

Getting Your Question Answered Requires Some Chutzpah

Given the large number of journalists present at the press event, sometimes it takes a little special extra something to get one's question asked. In 2014, journalist Vladimir Mamatov from the Russian city of Kirov posed as a journalist from Turkey to ask Putin a question about what he would do to support the production of kvass, a Russian beverage made from fermented bread. The journalist's audacity and Putin's playful reply resulted in a hilarious exchange which quickly spread on the internet and garnered Mamatov and Kirov's kvass acclaim across the country.

One of the highlights of Putin's press events is their tendency to create highly memorable or quotable answers to questions from the president.

For example, in 2012, after opposition journalist Maria Solovenko refused to sit down after asking her questions, Putin playfully quipped "Masha please sit down!", to which she shot back "Thanks Vova!" referring to the president by the informal variant of his first name Vladimir. The pair's exchange went viral, and Solovenko returned in the years since to ask the president more questions.

More recently, in 2016, Putin slammed the widespread claims by leaders of the US Democratic Party who claimed that Donald Trump won the presidential election due to Russian meddling. "The current US Administration and leaders of the Democratic Party are trying to blame all their failures on outside factors…We know that not only did the Democratic Party lose the presidential election, but also the Senate, where the Republicans have the majority, and House, where the Republicans are also in control. Did we, or I do that too?…The outstanding Democrats in American history would probably be turning in their graves. Roosevelt certainly would be, because he was an exceptional statesman in American and world history, who knew how to unite the nation even during the Great Depression’s bleakest years, in the late 1930s, and during World War II. Today’s administration, however, is very clearly dividing the nation."

© Sputnik / Mikhail Klimentyev
Vladimir Putin's Surprise Visit to Hmeymim Airbase Amid Victory Over Daesh
14
Other gems include 2008's "I am the richest man not just in Europe, but in the world. I collect emotions," 2007's "As far as bad moods go, of course I have them like any other person, but in those times I try to consult with my dog Konni – she gives me good advice," and 2006's "I know the mood of the G8's leaders. No one is against Russia being included and actively participating in this club, because nobody wants the G8 to become a meeting between fat cats."

If past events are anything to go by, this year's marathon presidential press conference should include some serious policy questions and answers, a few funny moments, and some quotable gems. But the only way to know for sure will be to watch it, and turn to Sputnik for the highlights.