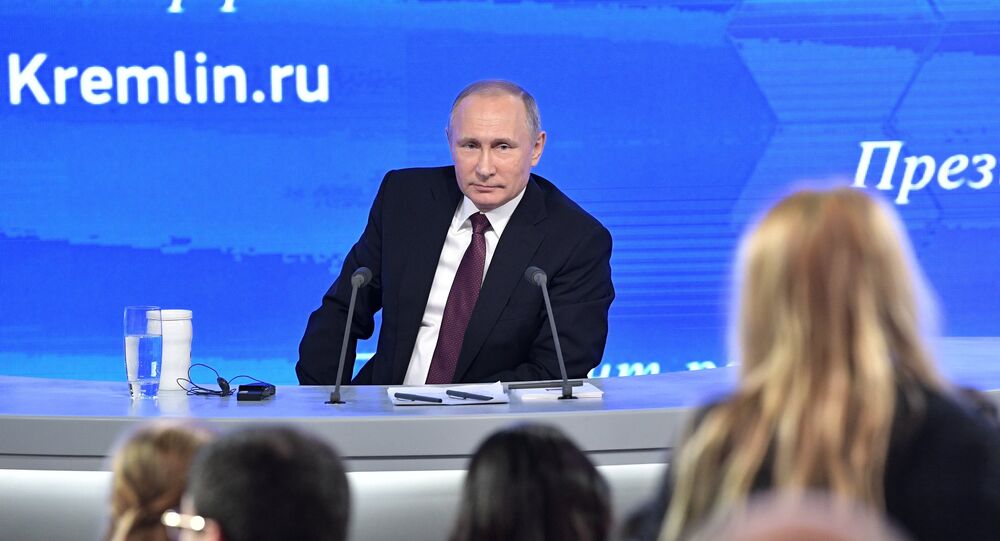 President Vladimir Putin covered a wide range of issues, including the state of the Russian economy, the modernization of the country's military, its defense spending, sanctions, the new arms race, as well as the country's foreign policy during a marathon press conference that lasted for nearly four hours.

The Russian leader largely focused on domestic issues, highlighting some of the topics he mentioned in his annual address to Russian lawmakers earlier this month.

© Sputnik / Alexey Filippov
Putin Will Decide on Running in Next Presidential Election 'When the Time is Ripe'
President Putin reiterated that the Russian economy was recovering, with the country's GDP decreasing by some 0.5-0.6 percent this year, compared to —3.7 percent in 2015. The Russian leader expected inflation to fall to 5.5 percent in 2016, a record low for the nation. This trend has prompted him to say that Russia could reach a 4-percent inflation rate in the foreseeable future.

The Russian economy is undergoing major structural changes in areas including defense and agriculture, he said, adding that the country is increasingly investing in high-tech.

"We are not going to isolate ourselves. If the Russian economy wants to grow – and it does and will grow by pursuing the high-tech path– it must remain a part of global economy, which it will," he said.

Russian leadership is determined to spend less on national defense. In 2011, the country's military spending amounted to 2.7 percent of GDP, rising to 4.7 this year. It is expected to fall to 3.3 percent in 2017 and reach 2.8 percent in 2019.

"We will maintain [this level of spending] for several years," the Russian leader said.

© Sputnik / Alexey Filippov
Russian National Defense to Be Main Item of Budget Savings - Putin
President Putin explained that Russia had to spend more on defense to upgrade its capabilities in recent years. Now that many of the goals have been reached, it does not have to spend this much. The cuts "will not affect our defense capabilities," he emphasized.

"We have made every effort to upgrade our forces which will lead to the share of advanced weapons in Russia's arsenal reaching 70 percent by 2021," the president detailed. "At this point, we are at about 50 percent, in some sectors at about 60 percent; the nuclear component is at 90 percent. Which is why we are completely satisfied, we are implementing our plans in full."

Russia is not the one 'fueling the new arms race"

President Putin said that there was nothing new about US President-elect Donald Trump's comments on upgrading America's nukes. However, the Russian leader was surprised by the response from some officials in the outgoing US administration to his comments on Russia's military capabilities.

© Sputnik / Pavel Kononov
Nuke Race 2.0: US 'Umbrella' Strategy Forced Russia to Increase Own Capacity
"All of a sudden [they] started saying that the US has the strongest military in the world. … And we do not argue with that. We are just saying that we are stronger than any aggressor and that is the case," Putin said.

Putin emphasized that Russia was acting in strict accordance with all international commitments, including the New START. He further noted that Moscow is not the one fueling an arms race with the United States. The basis for this process and ensuing tensions was created when Washington withdrew from the Anti-Ballistic Missile Treaty, forcing Russia to invest in upgrading its forces.

"That was not our idea, we had to meet the challenge," the Russian president said. "I would like to stress that … we will never spend the amounts we cannot afford should we be involved in an arms race."

© Sputnik / Grigory Sysoev
Putin Admits Travel to US In Case Trump Sends Invitation
Although Moscow's relations with Washington have gone into a deep freeze following the coup in Ukraine, Vladimir Putin said that he would like Russia "to have working relations" with President-elect Donald Trump and future leaders of the Democratic Party.

President Putin also said that the Democratic Party "has clearly forgotten the original meaning of its name," adding that the Obama administration and the Democratic leadership are trying to put the blame for all their failures on external factors.

"The current [US] administration and the leadership of the US Democratic Party are trying to put the blame for all their failures on external factors. We know that the Democratic Party has lost not only the presidential elections, but also the Senate and Congress where the Republicans now have a majority. Was it my fault as well?" he asked.

Russia wants Europe to "speak with one voice"

Russia wants to develop good relations with Europe, President Putin said, noting that he would like Europe to "speak with one voice." However, if the European Union is unable to resolve its internal issues, Russia will work with individual European nations on a bilateral basis.

"In fact this is what we have been doing. We have discussed some issues with the European Commission, while also communicating directly with some European countries. In principle, we are satisfied with it," he said.

President Putin confirmed that Moscow was ready to lift measures that Russia imposed in response to Western sanctions.

"We were not the ones to damage relations with the West and Germany. We did not introduce sanctions against Europe. We have merely responded to restrictive measures imposed on us. We will gladly repeal them all, although Russian agricultural producers are urging us not to, but only if our partners, including European ones, lift anti-Russia sanctions," he said.

Russia has "cordial relations" with the Kurds, President Putin said.

"Kurdish fighters have been extremely courageous and efficient against terrorists. When it comes to sovereignty, we will act within the framework of international law. In the end, the rights of the Kurdish people will eventually be secured. But how and in what form this will be done depends on Iraq and the Kurdish people," he added.

‘Archaic’ Electoral System One of US Democracy Biggest Problems - Putin

Putin Hopes US to Draw Conclusions From 2016 Presidential Election

This is Why Russia is Protected From Any Potential Aggression