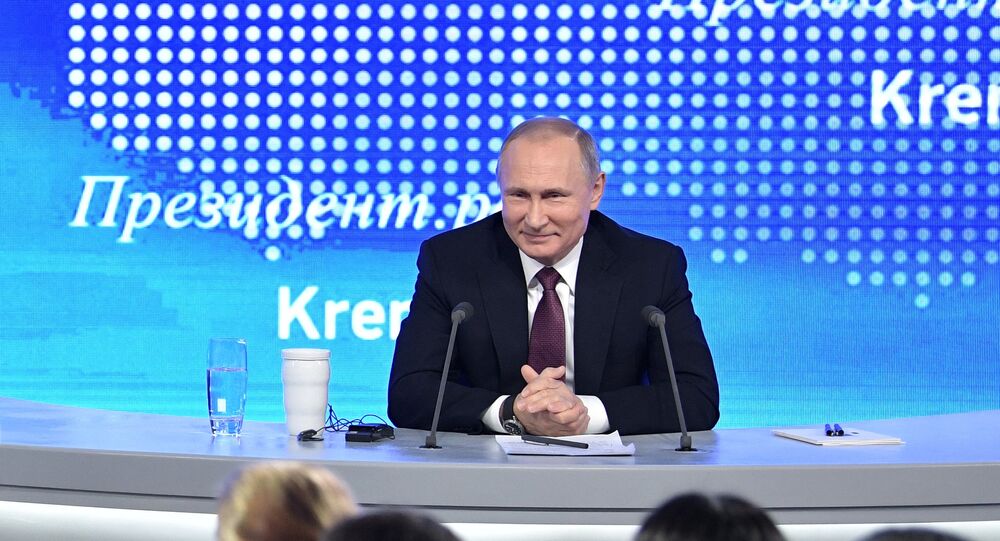 Who said that presidential press conferences have to be all work and no play? Anyone who has ever watched Vladimir Putin's annual pressers knows that there is always room for a joke and an off-the-cuff remark during these largely formal and serious events. This year was no different.

We offer you a listing of five funniest moments of Vladimir Putin's end-of-the-year press conference held on December 23.

"May I ask you about love?"

© Sputnik / Alexey Filippov
Putin Will Decide on Running in Next Presidential Election 'When the Time is Ripe'
President Putin is notoriously private when it comes to his personal life due to security concerns. This has not prevented journalists from trying to ask the Russian leader personal questions. Putin told reporters that he loved and was loved in return during the 2014 presser. This year the president joked a similar question away.

"Can I ask a question about love?" someone said. "About love? We need to finish this up," Putin answered, referring to the press conference which lasted more than three and a half hours at the time. "Love will easily turn into hatred if we continue this for too long," he added.

Robot for the Kremlin

Sasha Aksyonenko, an 8-year-old from Moscow, asked the Russian president what robot he would add to his team.

"Robots are needed in manufacturing. We deal with sensitive issues that have an impact on millions of human lives. So you have to be human first and foremost. We cannot rely on robots here," Putin said.

© Sputnik / Aleksey Nikolskyi
From Nukes and Trump to Europe's 'Voice': Highlights of Putin's Annual Year-End Press Conference
Kvass, a popular Russian soft drink, was back on the agenda of this year's press conference. "Last time we discussed kvass, let's continue. Say no to vodka and yes to kvass," the Russian president said.

Journalist Vladimir Mamatov from Kirov caused a stir two years ago during a similar event when he lamented that he wanted to bring kvass to Vladimir Putin, but the president's security team did not allow him to bring the beverage to the room. This year, Mamatov thanked the Russian president for his support of domestic producers, adding that kvass is taking on new markets and is currently exported to China and the United States.

President Putin reiterated that he was not immune to making missteps, but pledged to learn from his mistakes.

"Everyone makes mistakes. Not a single person can live and work without making them," he said, without going into detail on what those are. "I will try to learn from all my mistakes and flaws so that there are less of them in the future and so that we may work all together, including me, more effectively," he said.

Vladimir Putting spotted Khashavi Mukhammad, a journalist from TV channel Kurdistan 24, saying that "this young man is so finely dressed" it was impossible not to let him ask a question. The Kurdish journalist was sporting a traditional garment.