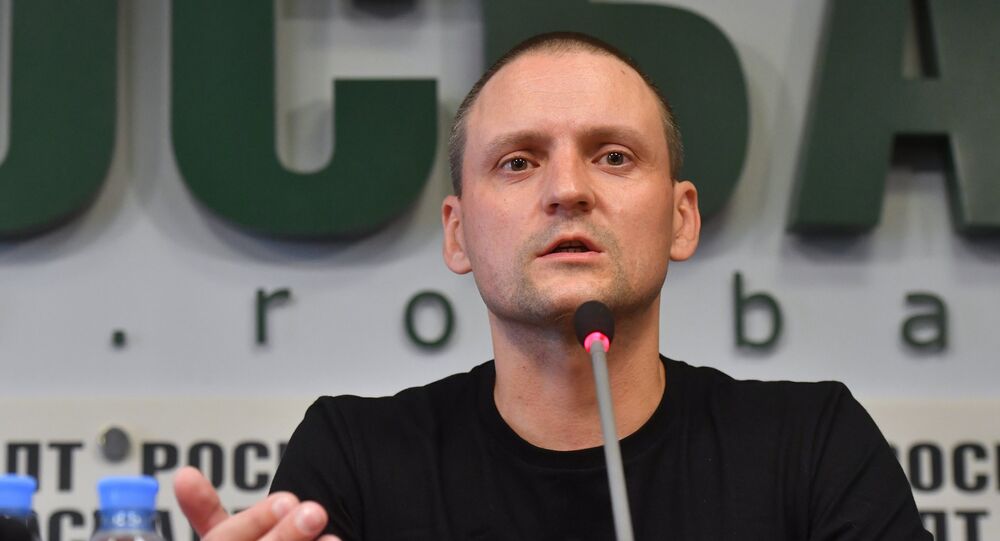 Russian Activist Wants to Unite Leftists, Interact With Allies in Europe, US

Russian left-wing activist Sergei Udaltsov, released from prison earlier in the week, stated that he would like to consolidate disjointed leftist groups together in Russia and interact with left-wing parties in Europe and the United States.

© Sputnik / Kirill Kallinikov
Russian Opposition Figure Navalny Not Entitled to Be Elected - Election Commission
MOSCOW (Sputnik) — Russian left-wing activist Sergei Udaltsov, released from prison earlier in the week, said Thursday he would concentrate on consolidating left forces and intended to hold meetings with leaders of left-wing parties in Europe and the United States.

"I hope that soon we will, through the renewal of the Left Front, get these disjointed groups together. The Left Front was engaged in it earlier, now the issue is even more relevant. For sure, the interaction with the left parliamentary parties [is needed], the consolidation of leftists, the interaction with the European and US leftists, which really raise their heads today. And there is a demand for change in the world, value changes, the ideology of consumption is becoming obsolete — this is our first priority," Udaltsov said at a press conference.

© Sputnik / Alexei Filippov
Russian Opposition Figure Nemtsov's Killer Sentenced to 20 Years in Prison
He noted that he intended to hold meetings with the leaders of all left-wing organizations in Russia soon.

"And I hope, that soon we will be able to restart the Left Front, we will have conferences already in fall, scheduled in Moscow and in the regions, that will show, whether it is possible to implement it," Udaltsov said

Udaltsov was released from prison on Tuesday, his wife said. He and Leonid Razvozzhayev were sentenced to 4.5 years in prison following the riots and clashes with the police during protests in Moscow in May 2012, where dozens of people were injured. More than 400 protesters were detained after the riots, but other protesters were sentenced to shorter terms. Several of the defendants were amnestied, and one was sent for compulsory psychiatric treatment. Supporters of convicts believe that the riots were provoked by the police.