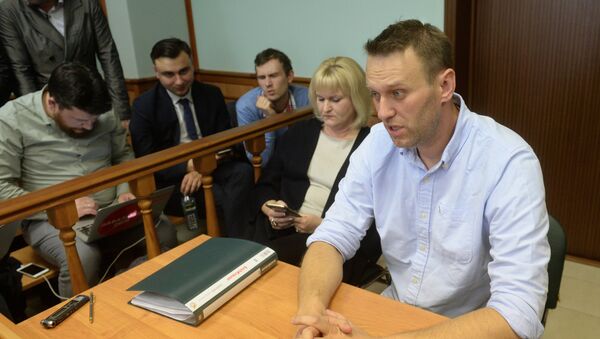 © Sputnik / Kirill Kallinikov
/
Go to the photo bank
Subscribe
Russian opposition figure Alexei Navalny does not have the right to be elected, according to the Central Election Commission (CEC).

MOSCOW(Sputnik) — Russian opposition figure Alexei Navalny is not currently entitled to run in elections due to his conviction, the Central Election Commission (CEC) said in a statement Friday.

"According to available information, on February 8, 2017, Navalny A. was sentenced under part 3 of Article 33, part 4 of Article 160 of the Criminal Code of the Russian Federation to five years of imprisonment with a fine of 500,000 rubles [$8,400], the sentence was suspended with a probation period of 1 year 5 months (the sentence entered into force). Thus, at the moment A. Navalny does not have the right to be elected," the statement said.

Russian Opposition Figure Navalny Arrested for Unauthorized Rally Calls
The CEC also stressed that the official election campaign in Russia had not started yet, as the submission of candidacies would only begin in December 2017.

"Given the aforementioned, the actions on organizing ‘staffs’ in support of ‘candidate’ A. Navalny are beyond the framework of the official presidential election campaign of the Russian Federation and beyond the regulation of the election legislation," the statement of the Commission said.

In May, Navalny’s lawyer Vadim Kobzev told Sputnik that Navalny planned to appeal the court’s verdict in the European Court of Human Rights (ECHR).