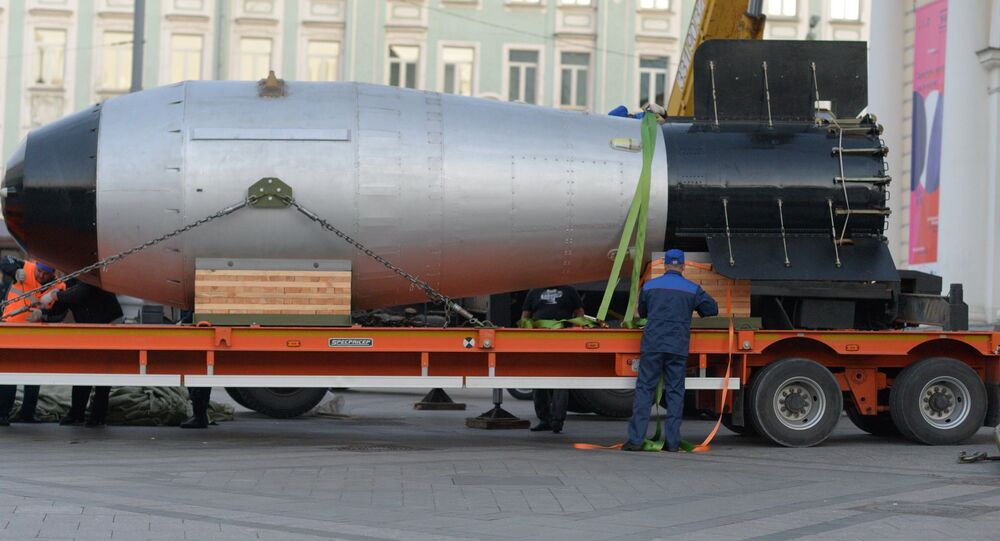 Fifty-five years ago the Soviet Union detonated a 50-megaton bomb over an uninhabited island north of the Arctic Circle. The most powerful thermonuclear weapon ever built by man, aptly called the Tsar Bomba gave the USSR nuclear parity with the US.

The super bomb was a necessity

The “thaw” in Soviet-US relations resulted, among other things, from Soviet Premier Nikita Khrushchev’s visit to the United States in the fall of 1959 ended on May 1, 1960, when a US U-2 spy plane flown by CIA pilot Francis Gary Powers was shot down in Soviet airspace while performing photographic aerial reconnaissance of the Baikonur cosmodrome and a number of Soviet military and nuclear facilities.

Powers parachuted safely, was captured and admitted the military nature of his mission. As a result, Khrushchev cancelled the scheduled opening of an east-west summit in Paris.

The Moscow-proposed moratorium on nuclear tests in the Soviet Union, the US and Britain, in effect since 1958, had left the USSR lagging far behind the US in the size of its nuclear arsenals. By 1960 the Americans had used the moratorium to bring the number of their nuclear and thermonuclear warheads to 18,600 from 7,500 in 1958.

In July 1961, Nikita Khrushchev decided that he had had enough of the moratorium and decided to start work on super-powerful thermonuclear weapons to restore nuclear parity with the US.

He also announced the need to build a 100 megaton hydrogen bomb as a means of forcing the Americans to wake up to reality.

A four-man development team of nuclear physicists Victor Adamskii, Yuri Babaev, Yuri Smirnov and Yuri Trutnev was tasked with the design and construction of a three-stage thermonuclear device in just 15 weeks.

Officially designated as the AN602 hydrogen bomb, the Tsar Bomba used the common three-stage Teller-Ulam design wherein the primary fission reaction was used to compress a secondary mixed fission/fusion fuel layer, which in turn compressed a large, tertiary thermonuclear payload essentially stringing a pair of hydrogen fission reactions together in order to generate enough energy to activate fusion in a uranium payload.

At 9 am on October 30, 1961, a specially modified Tu-95-202 strategic bomber with the Tsar Bomba on board, and a Tu-16A flying laboratory took off heading for a testing range on the Novaya Zemlya Archipelago in the Arctic Ocean.

At 27 tons, the Tsar Bomba weighed nearly as much as the Tu-95 that carried it and was so big that crews had to cut off the plane's bomb-bay doors in order to fit it in.

© Flickr / all_usernames_are_taken
US Planned to Drop Over 12 More Nuclear Bombs on Japan – US Media
At 11.30 am the explosive device was parachuted from 10,500 meters so that the bomber and the flying laboratory that was collecting data had time – 188 seconds – to leave the area.

The bomb went off at an altitude of 4,200 meters. The unprecedented explosion was expected to measure 51.5 megatons. In reality, its power was estimated at between 57 and 58.6 megatons.

The ball of fire from the explosion was 4.6 kilometers across and was visible from a distance of 1,000 kilometers despite dense clouds. The mushroom cloud rose up to almost 70 kilometers and had a diameter of 95 kilometers.

For about an hour after the explosion, radio signal distortions were observed hundreds of kilometers from the epicenter due to ionization of the atmosphere.

The blast wave circled the planet three times. On Dikson Island, some 800km from the range, the wave shattered windows, bringing the sound of cannonade with it.

© Wikipedia / Patrick Gruban
UN Votes for Nuclear Weapons Ban Negotiations Launch
Even though the Tsar Bomba was never meant to enter active service, its creation confirmed the Soviet Union’s ability to have as many megatons of nuclear might as it possibly desired.

It was with this realization in mind that the United States stopped their nuclear buildup and on August 5, 1963, a Treaty banning nuclear tests in the atmosphere, in outer space and underwater was signed by the Soviet Union, the United States and the United Kingdom.

The October 30, 1969, test of the Tsar Bomba thus played a crucial role in achieving nuclear parity between the Soviet Union and the United States and preventing nuclear war.