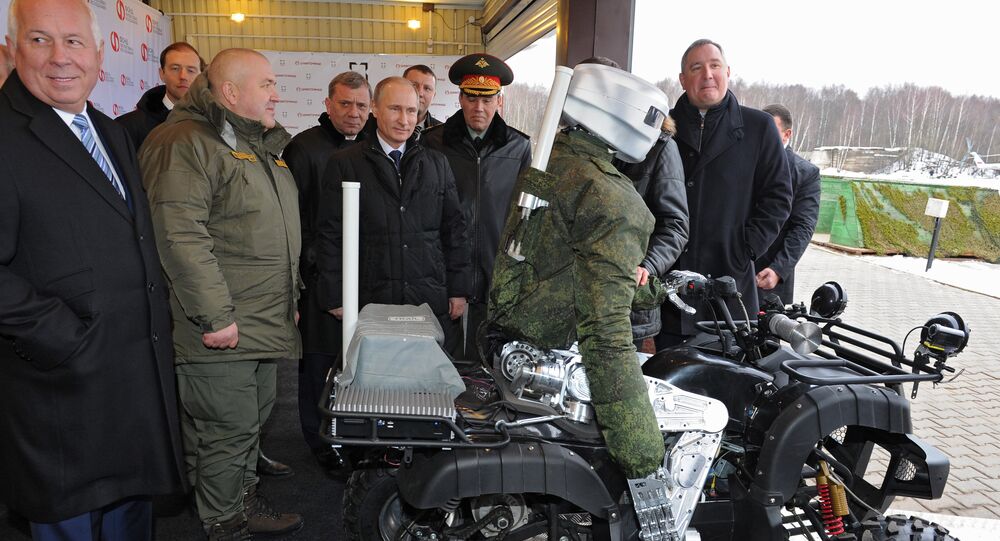 Russia’s weapons designers keep wowing the world with already existing “arms of the future” and exotic designs that border on science-fiction.

The “smart bullet,” currently being tested in Russia, is exactly one such wonder weapon. And smart it really is because, as it flies, it is able to correct its path either automatically or with the shooter’s help, to hit the bull’s eye.

Its creators call their unique brainchild “a jet-propelled sniper complex with a guided bullet,” adding enigmatically that there is an entirely new generation of long-range armor-piercing bullets made from two or more types of metal now in the making.

© Sputnik / Vladimir Astapkovich
Russia’s Future Weapons: Avatars, Combat Robots and Mind-Controlled Quadcopters
A bullet like this will hit targets 8-10 kilometers away. Just what this complex really looks like or how the smart bullet is going to “think” is a big secret though.

A new robot-avatar, designed to have functions comparable to those of a human being, was revealed to Russian President Vladimir Putin at the Central Institute for Scientific Research in January 2015.

The machine is expected to be able to effectively work on its own in the conditions of human infrastructure, travel on a variety of terrains, drive a vehicle and provide emergency medical aid.

An electromagnetic railgun was tested in the US earlier this year firing bullets at Mach 6 — six times the speed of sound. Not to be outdone, Russian engineers are now at work developing this country’s very own such weapon of the future.

In a series of laboratory tests the Russian prototype has fired its projectile at a whopping 6.25 kilometers per second. A weapon capable of firing at a speed like this renders useless all existing means of ship, plane or tank protection.

Moreover, a projectile made from several kilos of tungsten is comparable to a small-yield nuclear artillery shell as it generates almost as much energy without leaving behind a deadly trail of radiation.

During the latest such test the projectile reached the speed of over 11 kilometers a second, which means that the Russian railgun can send payloads right into space!

Talk to me, Ratnik!

The development of the third generation Ratnik infantry combat system is already under way in Russia.

As an upgraded version of the Ratnik-2 "soldier of the future " outfit more than 80,000 Russian servicemen were equipped with last year, Ratnik-3 will integrate various biomechanical tools, including exoskeletons. What makes ratnik-3 so special is that it will enable the soldier to control his “onboard” systems by voice this radically increasing his chances of survival in combat.

The Ratnik outfit is mainly designed for snipers, riflemen, drivers of armored vehicles and airborne combat vehicle gunners. Russian military engineers are working out unified combat subsystems where a soldier could act as part of a single structure.