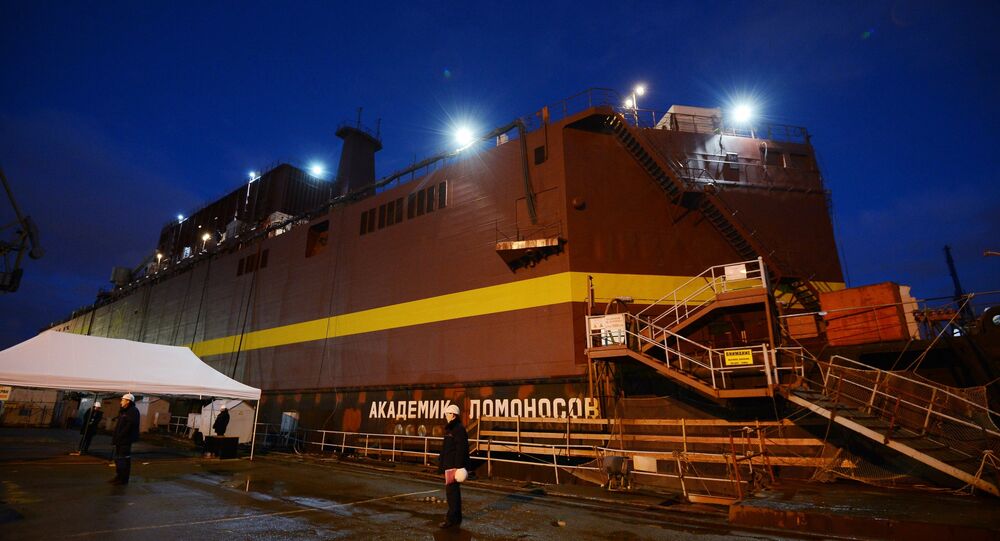 © Sputnik / Alexei Danichev
Full Power: Russia Develops Floating Nuclear Power Plants to Explore Arctic
The tests will be held at the Baltic Shipyard in St. Petersburg, according to the press service of the Rosatom Corporation.

Akademik Lomonosov has a length of 144 meters and width of 30 meters. It has a displacement of 21,500 tons and a capacity of 69 people as crew members. For power generation, it has two modified KLT-40 naval propulsion reactors together providing up to 70 MW of electricity or 300 MW of heat.

The purpose of the mooring trials is to test the design specifications of the equipment and floating power of the plant. According to the schedule the mooring tests of the power plant are planned to reach completion by October 30, 2017.

The Director of the Department of Information and Public Relations of Rosenergoatom concern, Andrew Timonov, spoke to Sputnik in an interview about the scheduled tests.

“Back in 2008 we started the construction of the floating nuclear power plant. By the name of the power plant, it is obvious that the key difference or feature of this power block is that it is mobile,” Timonov said.

“It can reach the consumer directly. This feature is especially useful in remote areas. It makes no sense to use such a station in the central parts of Russia, where there is a large saturation of roads and infrastructure facilities. The station is convenient for using in the Far East and Far North,” the director further said.

Talking about the functioning of the floating power unit, Timonov said that the unit will be deployed to Pevek, after completing the tests. It will be based in a specially equipped marina, with the necessary network infrastructure already setup.

“From there the whole city of Pevek and Chukotka will be supplied with electricity. After functioning for 12 years, the power unit will be shipped to Murmansk, where it will undergo repairs for one year. After that the power unit will return to its base and continue to work as a power plant.”

“This is a Russian know-how. Currently, the floating nuclear power unit Akademik Lomonosov is the only object of its type, the world's only mobile nuclear installation.

Many foreign countries have expressed great interest in this innovative project. For example, for an island nation it is more convenient to drag a ready-made energy block, instead of setting up the whole network infrastructure there,” the director concluded.

Floating nuclear power stations are planned to be used mainly in the Russian Arctic. Five of these will be used by Gazprom for offshore oil and gas field development and for operations on the Kola and Yamal peninsulas.

Other locations include Dudinka on the Taymyr Peninsula, Vilyuchinsk on the Kamchatka Peninsula and Pevek on the Chukchi Peninsula.

According to Rosatom, 15 countries, including China, Indonesia, Malaysia, Algeria, Namibia, Cape Verde and Argentina, have shown interest in acquiring such power plants.